A historic election for India 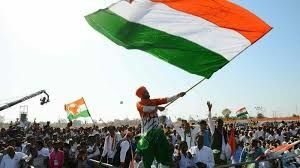 The world’s largest democracy with a population of 1.3 billion is heading to the polls on April 11 in a marathon election that will continue for six weeks. Indian Prime Minister Narendra Modi, who was voted into power five years ago with a comfortable majority, is seeking another term for his Hindu nationalist party Bharatiya Janata Party (BJP).

While in 2014, Modi campaigned under the slogan “sabka saath, sabka vikas” (collective efforts, inclusive growth), this year the prime minister has made nationalism the pillar of his electoral strategy. The military escalation with Pakistan in February gave his campaign a significant boost and helped him launch what very much looks like a hyper-nationalist blitzkrieg.

Almost every electoral rally Modi leads, features pledges to defeat Pakistan, photographs of slain soldiers, and a barrage of militaristic rhetoric. Just days before polls were to open, the prime minister addressed first-time voters, saying: “Will you dedicate your vote to the brave men who conducted Balakot air strikes, to the CRPF men who lost their lives in the Pulwama attack?”

India’s air strikes on the Balakot region in Pakistan in the aftermath a deadly attack on a military convoy in Pulwama district of Indian-administered Kashmir managed to reverse the downward trend in Modi’s popularity ratings. In January this year, his approval rating was hovering around 32 percent. This came after his party lost by-elections in three key states Rajasthan, Madhya Pradesh and Chhattisgarh held late last year.

After the Pulwama attack, however, Modi’s rating shot up to 62 percent, as he rode on the “revenge” wave that swept through the country.

As India descended into anti-Pakistan sentiment, the many failures of the BJP government were conveniently swept under the carpet. The promises for economic development and vigorous job creation never materialised in the past five years. Modi’s economic record appears mixed at best.

While he managed to push through some business-friendly reforms that facilitate business activities such as cross-border trade and construction permits, and has overseen GDP growth reaching seven percent, he has failed to enforce economic changes to improve the lot of the majority of Indians and lift their standard of living.

Last year, farmers marched barefoot in the national capital to remind the country of the rural and agrarian distress. In January this year, millions of workers went on strike against the Modi governments anti-labour policies. Among their complaints were a lack of jobs and the merger of state-run firms that were struggling to sustain themselves.

The job situation in India has gone from bad to worse. A report by the National Sample Survey Office leaked in February revealed that unemployment in India is at 6.1 percent – the highest it has been in 45 years.

The ill-conceived and executed demonetisation programme, which was hailed as one of the most heroic and bold decisions by the Modi government, failed miserably, to the extent it does not find a mention as an achievement in the party’s election manifesto.

But while Modi failed to fulfil his 2014 campaign promise to bring the “good days ahead” and an era of nation-wide prosperity, he still left his mark on India.
Much has changed in the country in the last five years.

Some of the most powerful institutions of the country have been undermined. Aspersions have been cast on the Supreme Court of India, the constitutional temple of the country. In an unprecedented move a year ago, four Supreme Court judges decided to convene a press conference and speak up about being forced to work in a problematic atmosphere that could disrupt the fairness of judicial processes.

The Central Bureau of Investigation, India’s premier law enforcement agency, where our hope for justice rests, has been mired in controversy after its director Alok Verma was removed – a move many have seen as politically motivated.

Independent institutions like the Reserve Bank of India have witnessed a churning and controversial exits. Government officials and non-compliant administrators have complained to me in off-the-record conversations of surveillance by the state. Public servants, ministers, politicians, and the general population now prefer talking on WhatsApp, fearing phone tapping.

India’s civil liberties have also taken a hit. Minorities have increasingly become the target of mob violence. Hate speech has been normalised, while human rights activism has been increasingly suffocated and at times even criminalised.

Critical voices have been languishing behind bars. Civil rights activist Sudha Bhardwaj, who has campaigned for minorities’ land rights of and who was recently honoured by Harvard Law School as one of 21 women inspiring change, has been incarcerated since October last year for crusading against unjust practices of the state.

Over the past five years, we have become a nation that increasingly chooses to stigmatise its own citizens on the basis of caste, religion, and economic status in clear violation of the basic tenants of the Indian constitution.

Modi’s disregard for civil liberties is only paralleled by his disdain for the free press. In his five-year term, he has not held a single press conference or answered direct questions from the media.

Pressure on mainstream media has increased and many prominent editors and journalists have had to leave the newsrooms of major outlets. Just a few days ago, journalist Kishorechandra Wangkhem was released after spending four months in jail for a YouTube video critical of Modi and the BJP. Wangkhem who was booked under the draconian National Security Act was released only after a judicial order from the High Court of the state of Manipur.

Real news in India has now been replaced by half-truths, while fake news has flooded India’s social media, making its way to government statements.

For every criticism of the excesses of this government, we are given a skewed version of our past. We are reminded of the Indian partition, of the self-serving nature of freedom fighters like Jawaharlal Nehru and Mahatma Gandhi; our history is being re-written, re-imagined to build the Hindu-nationalist narrative as the redeeming idea for the country.

India is at a critical juncture in its history. As Indian academic and author Pratap Bhanu Mehta recently pointed out: “There is something happening to our democracy which is mutilating the democratic soul. We are becoming a nation of resentful hearts, small minds and constricted souls.”

The 2019 election is not about Narendra Modi and the BJP, the Congress or any other opposition party – it is about the character of this nation and the preservation of its democratic and pluralistic foundations which have been a guiding light for leading humanists and leaders across the world.

Another term for Modi and the BJP would give them the mandate to proceed with their Hindutva experiment with impunity and expand it. This election will indeed be a battle for India’s soul.