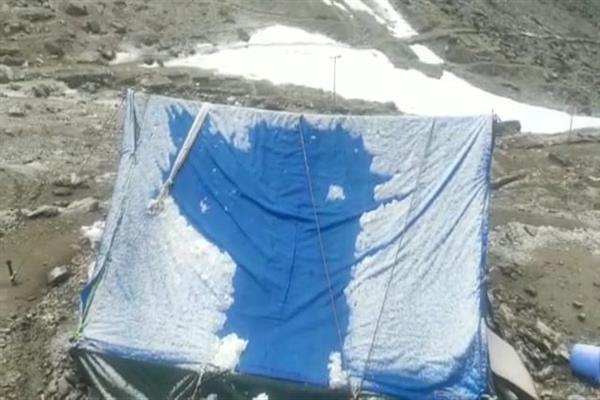 SRINAGAR:  Ahead of the Amarnath yatra, the cave shrine witnessed fresh snowfall on Saturday.

“Fresh snowfall occurred at Panjtarni and Amarnath cave on Saturday morning. Weather is likely to remain erratic till June 21,” an official said.

He said the area around the cave shrine recorded 1 to 2 inches of snow.

The 43-day-long Amarnath Yatra is scheduled to start on June 30.

Situated at an altitude of 3,888 meters, the holy Amarnath cave is accessible from two routes in Kashmir Valley. The 46-km Pahalgam–Holy cave trek is an ancient pilgrimage route that is covered in five days. There lies the ice lingam of Lord Shiva that is formed naturally and waxes and wanes with the moon. The new 14-kilometer Baltal-Holy cave route is now preferred by the pilgrims since it is shorter though steep, and the journey can be completed in a day.

Shri Amarnath Shrine Board (SASB) has already issued an advisory asking pilgrims to acclimatize bodies before embarking on the pilgrimage.

Around 8 lakh Yatris are expected to visit the Amarnath Yatra this year which is scheduled from June 30. All possible arrangements are being put in place by the administration.

“You are advised to start at least a month before the Yatra at least a 4-5 kilometer morning, evening walk. For improving the oxygen efficiency of your body, you should start doing deep breathing exercises and yoga, particularly Pranayam,” the advisory said.

The holy cave is at a very high altitude of 12,700 feet. One has to cross 14,000 or 15,000 feet on the way. In such a situation, it is necessary to practice deep breathing exercises because there is a lack of oxygen at such a height.

Divisional Commissioner Kashmir P K Pole has directed deputy commissioners to visit the Yatra route and prepare a list of vacant and under-construction buildings in villages along the route.

Kashmir is witnessing a peak tourism season with almost all hotels and houseboats booked with tourists.

As hotels are packed with tourists, the administration is contemplating using vacant and under-construction buildings along the route to the Amarnath cave for Yatris and security forces.

A senior official said Yatris will be provided with the best possible facilities. “All arrangements from lodging, sanitation, and clean drinking water are being made. Besides, adequate security arrangements will also be made for the safety and security of Yatris,” he said.