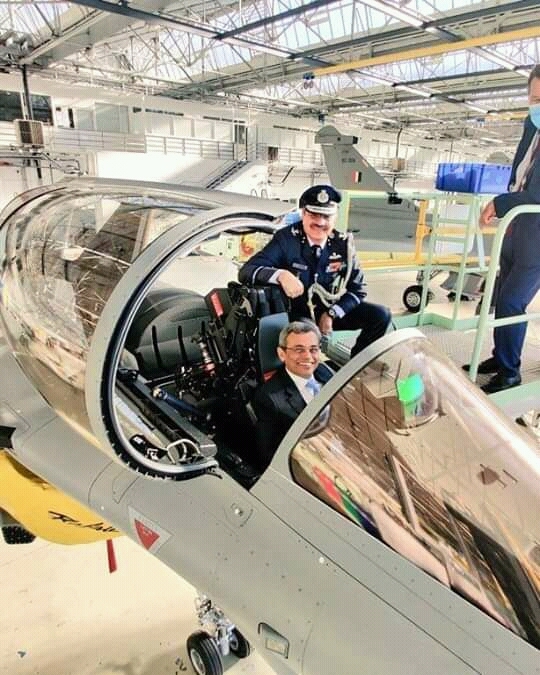 Air Commodore Hilal Ahmad Rather, the Air Attaché to France (in the uniform) along with India’s Ambassador to France Jawed Ashraf

A senior Indian Air Force officer from Kashmir saw off the first batch of Rafale jets which took off from France to India on Monday.

Air Commodore Hilal Ahmad Rather, the Air Attaché to France was among the senior officials present on the occasion which included India’s Ambassador to France Jawed Ashraf and Éric Trappier, Chairman Dassault Aviation.

The five fighter jets are the first batch of the 36 Rafale fighter aircrafts India has procured from France for Rs 59,000 crore in 2016 as an emergency purchase to arrest the worrying slide in the IAF’s combat capabilities.

The jets took off from Dassault Aviation Facility, Merignac, France, on Monday and are expected to reach Air Force Station, Ambala, on Wednesday subject to weather.

The Rafale aircraft will cover a distance of nearly 7000 kms from France to India with air-to-air refuelling and a single stop en route in UAE.

The Indian Air Force pilots and supporting personnel have been provided full training on aircraft and weapon systems by Dassault.

Acting on a special request by the IAF, France has accelerated the deliveries of Rafale fighters to India – five jets are coming instead of four that were originally planned to be delivered in the first batch.

France handed over to India its first Rafale fighter during a ceremony attended by defence minister Rajnath Singh and his French counterpart, Florence Parly, in Merignac on October 8 last year.

The delivery of all 36 aircraft will be completed by the end of 2021, said the Indian mission in France.

Who is Hilal Rather?

Currently serving as an Air Attaché to France, Air Commodore Hilal Ahmad Rather is a decorated officer of the Indian Air Force from Kashmir. He was commissioned in IAF as a fighter Pilot in the Flying branch on 17 December 1988. He was promoted as Flight lieutenant in 1993, Wing Commander in 2004, Group Captain in 2010 and Air Commodore in 2016.

Rather has more than 3000 hours of accident free flying on MiG-21s, Mirage-2000 and Kiran aircraft. He is a Fighter Combat Leader and a qualified Flying Instructor. He is a graduate from Defence Services Staff College (DSSC) and has served as a Directing Staff at DSSC as well. He has commanded a Mirage-2000 Squadron and also a front-line Air Force Base. He graduated from the Air War College in USA with academic distinction.