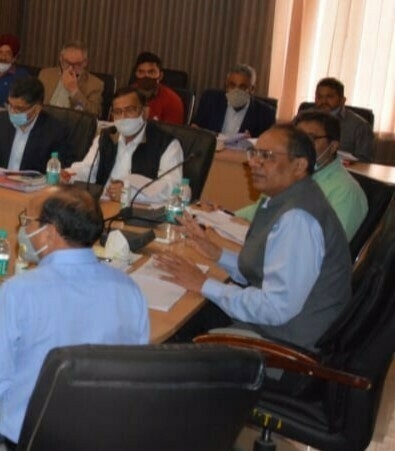 The Principal Secretary reviewed district-wise and circle-wise status of financial and physical status of the ongoing works under different CSS being executed by different agencies in various districts and circles of the Union Territory.

At the outset, a detailed power-point presentation was given over the targets and achievements under Deen Dayal Upadhyaya Gram Jyoti Yojana, (DDUGY), PMDP, RAPDRP, RGGVY, IPDS and other schemes undertaken in PDD sector of the districts.

The Principal Secretary was informed that the projects for Jammu division being executed in circle-wise and district-wise under PMDP-Urban Scheme, out of Rs 537.32 crore sanctioned amount of center share, Rs 212.04 crore has already been spent.

Similarly, under the PMDP-Rural scheme, out of a sanctioned amount of Rs 464.40 crore, an amount of Rs 126.76 crore has been spent on the projects.

While reviewing physical and financial progress on CSS, Kansal directed the concerned officers to remove all the bottlenecks and RoW issues so as to speed up the execution of the projects.

He also asked the concerned engineers to prioritise works and formulate definite timelines for early completion of these projects. He also asked the concerned officers to devise a system to continuously monitor and redress all pending issues including delays in payments besides removing all bottlenecks like forest clearances and land-related issues.

He also directed the concerned chief engineers of both the corporations (JPDCL, KPDCL) to minimize the gap between completion of projects and handing over the same to be put for public use at the earliest.

The Principal Secretary asked CEs of both the power distribution corporations to ensure all compliances including proper maintainence of  accounts, timely audits and submission of UCs Mr Kansal emphasized that  third party monitoring and addressing of all issues that emerged as a result of the monitoring were essential elements of the compliance process and should be studiously adhered to.

The Principal Secretary assured all possible support and assistance to PIAs and PMAs from the side of the government and asked them to gear- up the men and machinery to achieve the set targets within the given time limits.