Inside Katrina Kaif-Vicky Kaushal’s wedding: Here are the first pictures of the invitation card 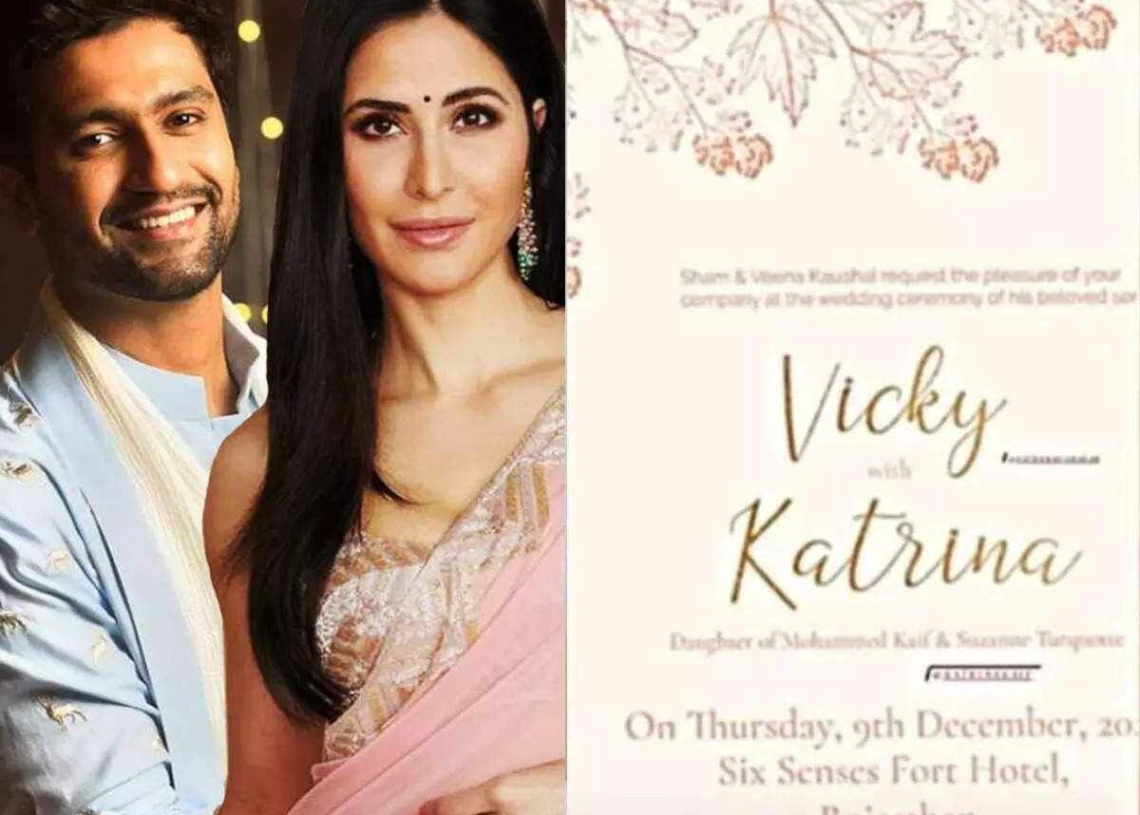 Fans have shared the first photos of the wedding card. Keeping up with the pastel theme, the card features floral borders with Vicky and Katrina’s names printed in gold in the center.

Almost 40 luxury cars have been lined up at the Jaipur airport. As many as 120 guests, including film industry heavyweights, are expected to attend the wedding functions.

Vicky Kaushal and Katrina Kaif’s wedding is going to be a private, intimate affair with only immediate family and close friends in attendance.

A reception will be hosted for the film fraternity at a much later date. The two are expected to tie the knot on December 9, as per Hindu customs.  Sangeet ceremony will be held on December 7, followed by the Mehendi ceremony the next day. A special reception will also be held after the wedding ceremony on December 10.

Vicky will reportedly make a royal entry in a chariot of seven selected white horses while they will wed in a royal ‘mandap’, as per reports. Sawai Madhopur district is famous for the Ranthambore National Tiger Reserve. As per reports, the guests are likely to be taken for a tiger safari.

Security has been tightened in the entire area, and restrictions have been imposed on the movement of people. Directions have been given that all guests should have got both the doses of vaccination keeping in mind the Covid pandemic. RT PCR test is compulsory for those who have not taken vaccine doses. For security arrangements, 100 bouncers will come from Jaipur on December 5. Rajasthan police personnel will also be deployed for the security of the VIP guests. Join News18 to stay up to date with the latest happenings on the biggest celebrity wedding of the year.

Nearly 20 kg of ‘organic mehendi’ powder has been supplied from Sojat town of Rajasthan’s Pali district for Katrina Kaif and Vicky Kaushal’s wedding festivities, set to start from Tuesday, December 7.

Besides, 400 pieces of mehendi cones have also been sent for the couple’s wedding, scheduled to take place at hotel Six Senses Fort Barwara, Sawai Madhopur, Rajasthan.

Katrina Kaif made her acting debut with the 2003 film ‘Boom’ starring Amitabh Bachchan, Jackie Shroff, and Zeenat Aman, among others. However, it was Katrina’s 2007 romance drama Namastey London opposite Akshay Kumar that earned her critical acclaim and massive fame.

Post their big fat Punjabi wedding, Vicky and Katrina will return to their professional commitments. The couple will reportedly not have a honeymoon. Katrina has to resume the shoot for Vijay Sethupati’s film while Vicky will report on the sets of Dinesh Vijan’s movie.