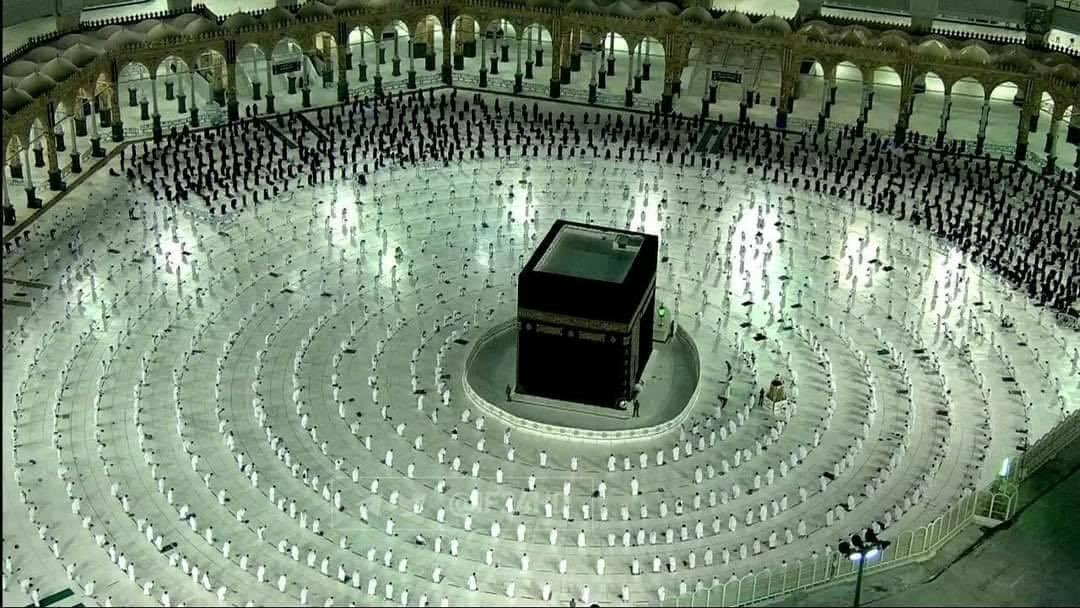 Muslims performed the first Tarawih prayer at the Two Holy Mosques of Mecca and Medina on Monday amid strict COVID-19 measures.

King Salman issued a decision on Sunday approving the evening prayer in mosques across the Kingdom during the month of Ramadan, but that they be reduced and combined with the Isha prayer.

Only vaccinated or immune worshippers will be allowed to enter the Grand Mosque in Makkah and the Prophet’s (PBUH)Mosque in Madinah and those who do not have a permit will face a hefty fine in a bid to prevent the spread of the virus.

The General Presidency for the Affairs of the Two Holy Mosques said it had intensified disinfection and sterilization operations, and is distributing single-use Zamzam water bottles to the prayer halls, areas, squares and to visitors, in general.

The authority said it had recruited more than 100 personnel to welcome worshippers at entrances and direct them to designated places and installed screening points. Thermal cameras have been set up to detect any signs of illness among those entering the mosques.

Meanwhile, the Ministry of Islamic Affairs said it has completed all preparations for the Muslim holy month. The program includes a number of projects, namely distributing dates through Islamic centers and religious attaches in a number of countries, the King Salman break fast initiative in 16 countries, campaigns to limit the spread of the coronavirus in mosques, as well as a series of virtual lectures throughout the month.

Muslim pilgrims carried out the first dawn prayer of the holy month of Ramadan on Tuesday in Mecca and Medina in Saudi Arabia.

Socially-distanced pilgrims dressed in traditional white prayed around the Kaaba, the holiest site in Islam.

Only people who were vaccinated against COVID-19 vaccine or had recently recovered from the coronavirus were allowed to attend.

Saudi Arabia’s moon-sighting committee had announced earlier in the day that the month of Ramadan would begin on Tuesday.

During Ramadan, Muslims abstain from food and drink between sunrise to sunset.

The Kaaba is a place of pilgrimage that able-bodied Muslims are required to visit at least once in their lives.

Millions of people visit every year, most of them from abroad.