Watch: In 100 days, public-govt partnership brings back a dead lake 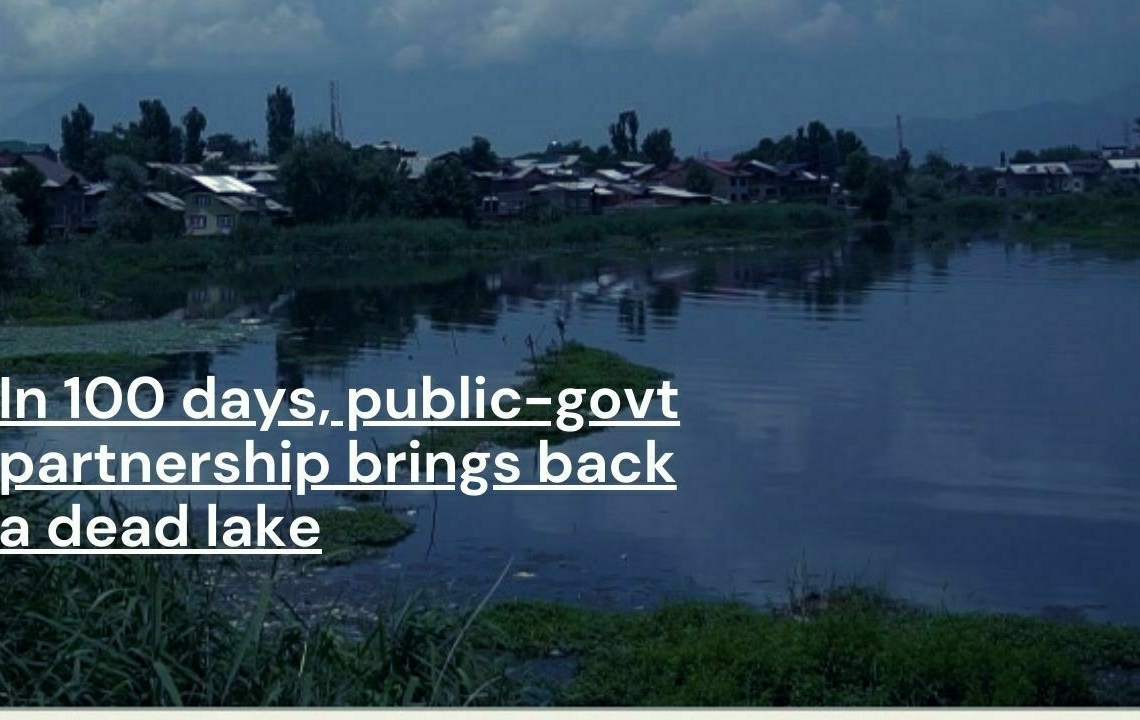 Srinagar: A perfect example of public and government’s participation has led to something that was deemed impossible a few months ago.

Khushalsar, a lake in the heart of Srinagar which was covered with muck, weeds, animal carcasses, and garbage, has started to breathe again: all in a matter of just 100 days.

“We had to cover our noses to cross the road here. We used to fall ill because of the stench and never thought it was possible to clean it, but all credit goes to Manzoor sahib who brought us together and achieved the unthinkable,” said Nasir Ahmad, 45, a local of Gil Kadal area.

Manzoor Wangnoo, a social worker and chairman of Nigeen Lake Conservation Organization (NLCO), is at the forefront of mobilising government as well as public support to bring back to life the dead water bodies in Srinagar.

And the initial success at Khushalsar has left everybody amazed.

“We all are responsible for it. We are the ones who encroached water bodies. We are the ones who dumped trash in them. Hence it is us who have to work together to fix it,” said Manzoor as the Shikara rowed all the way from Pokhribal (Chotta Nigeen) to the gates at Nala Ameer Khan, something that was impossible to do a month ago as the key waterway was completely choked.

With NLCO’s mission ‘Ehsaas’, Manzoor made persistent efforts to bring to the government’s notice the pathetic state of the essential water channel connecting Dal and Nigeen with Gilsar and Khushalsar via Nala Ameer Khan.

“I was lucky to get the complete support of all the concerned government bodies including Lakes and Waterways and Srinagar Municipality and in a matter of three and half months, we all were able to achieve this,” he said.

Since late February, over 1,500 trucks of garbage have been removed from Khushalsar.

“It had become a dustbin. All the waste was dumped here. Animals used to walk over it as it has started to turn into a huge pile of garbage and land mass,” said Mohammad Shafi Malik, president of the mohalla committee at Khushalsar.

“But today one can see this lake is getting back to life,” he said.

Encouraged by the change, the administration is now supporting Manzoor and the locals in cleaning Gilsar, another lake separated from Khushalsar by a narrow passage.

“It has been a week since the administration led by the Divisional Commissioner, Kashmir ordered the cleaning of Gilsar. It is phase II of our Ehsaas project,” said Manzoor.

Along with the clean-up process of the two lakes, Manzoor mobilised support to clean the important navigation channel from Pokhribal till Nala Ameer Khan.

“Land mafia and encroachers have literally choked this otherwise crucial waterway. They used to open gates at Nalabal during the night and dump all the waste into Gilsar and Khushalsar. This had been going on for the last 3 decades,” he said.

Residents at Nalabal said they had been appealing the government for several years to clean the essential waterway but “hardly anyone cared.”

“We are seeing some positive development only in the last few months,” said Abdul Rehman Dhobi, 60, a local resident of Nalabal.

“We appeal the government to start dredging of this waterway so that it comes to life again,” he said.

With efforts of Lakes and Waterways Development Authority (LWDA), the choked channel was cleaned to a major extent making it possible to navigate through it in a boat.

On June 5, the World Environment Day, a team of administration led by Divisional Commissioner Kashmir PK Pole took an extensive tour in a Shikara in the water channel, which was once the lifeline of all the major water bodies in Srinagar and Ganderbal.

“We are focusing on restoring the channel till Nala Ameer Khan and doing our best to continue the cleaning process. Dal, Nigeen, Pokhribal, Gilsar, Khushalsar and Anchar are all connected by this channel and if it kept clean, the ecosystem will improve a lot,” Dr. Bashir Ahmad Bhat, Vice Chairman LWDA.

“While we are on the job to clean the channel, it is ultimately the people who have understand and stop throwing garbage in it,” he said.