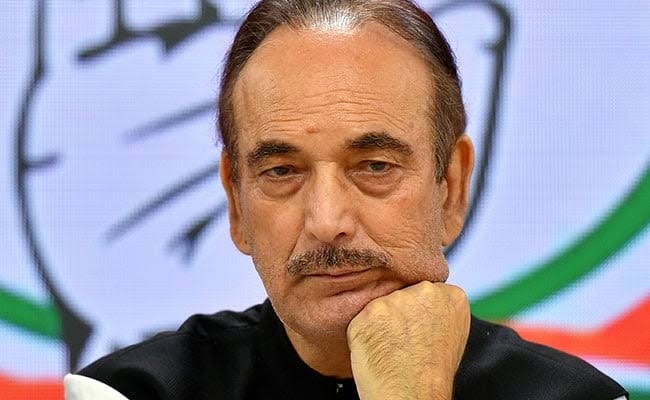 New Delhi: After veteran leader Ghulam Nabi Azad was refused the Rajya Sabha nomination, Congress interim President Sonia Gandhi tried to placate him by offering him the number two position in the party. Sources said the move has failed to pacify Azad, who refused to take the offer.

According to sources after Sonia Gandhi’s phone call on Sunday to Azad both met and discussed issues regarding the party.

Sources said Azad was offered the post in the organization which could be number two in the party hierarchy, but the veteran leader refused to accept it.

Azad who was denied a Rajya Sabha berth at the last moment is upset with the party affairs. And, has not shown any interest in the organization and reportedly told Sonia Gandhi that “new people should work as it is a generational shift in the party”

Azad and his supporters are also upset with the way the party is functioning in his home state of J&K and in recent statewide ‘Chintan Shivir’ neither Azad nor his supporters participated. This clearly showed that all is not well. His supporters want him to be the face of the party in the state.

Congress in its ten-candidate list for the Rajya Sabha denied Anand Sharma and Azad the berth and instead nominated Imran Pratapgarhi.

Sonia Gandhi reached out to Ghulam Nabi Azad and sources said the move was an effort to douse the fire and cull any discontent.

Azad was one of the prime movers of the G-23 and is one of the vocal voices within the party over reforms.

Tension is also simmering in the party units in Chhattisgarh and Rajasthan over outsiders being nominated for the Upper House. The party leaders are questioning the move, but the Chief Ministers have not said anything against the party’s choice of candidates. Both states will go to the polls next year.

The names of Congress veteran leaders like Ghulam Nabi Azad, Anand Sharma, and Veerappa Moily did not figure in the Rajya Sabha candidate’s list, and the trio was hopeful to be nominated, but it was the loyalists who got the tickets.

The loyalists include mostly the GenNext leaders, but Mukul Wasnik and P. Chidambaram did find a place. This has led to discontent within the party and even many in the young brigade to are upset.

Party spokesperson Pawan Khera, who was hopeful from Rajasthan, tweeted, “There may be shortcomings in my penance.” Reacting to his tweet, Nagma, a former actress, who has been at the party for a long replied, “my 18 years of work fell short of Imran Bhai.”

Hinting her discomfort, Nagma had tweeted, “SoniaJi our Congress president had personally committed to accommodating me in RS in 2003/04 when I joined Congress party on her behest we weren’t in power then. Since then it’s been 18Yrs they dint find an opportunity Imran is accommodated in RS from Maha I ask am I less deserving”.