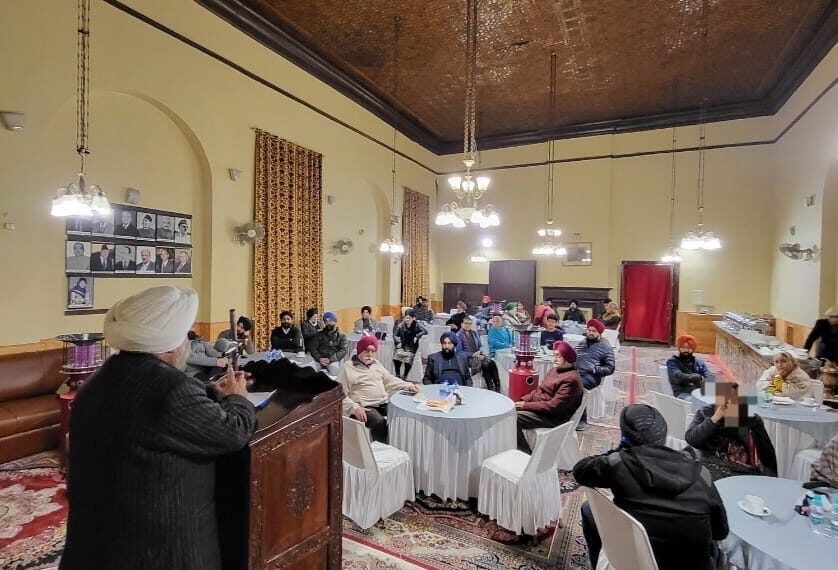 Srinagar, Nov 10: The Amar Singh Club, Srinagar held an interaction with eminent Sikh personalities of Kashmir which was followed by dinner to celebrate the Birth Anniversary of Guru Nanak.

On behalf of the Managing Committee of Amar Singh Club, the Honorary Secretary Nasir Hamid Khan presented the welcome address. He informed the participants that the event was a small gesture of appreciation for the Sikh Community who have always  – in line with the teachings of Guru Nanak Dev Ji  – worked selflessly for humanity without paying any heed to caste, creed or color.

He informed the participants that the Club Management had in line with the desire of the Club Patron/President Shri Manoj Sinha Ji, Hon’ble Lieutenant Governor of Jammu and Kashmir initiated a regular social outreach to various sections and communities. The Club had organised Eid, Diwali,Gurpurab events along with other meaningful interactions through exhibitions and symposiums which had been widely appreciated by the society.

He stated that every faith has a common thread of human improvement, love, respect for others and sharing other people’s suffering. Every religion has, more or less, the same viewpoint and the same goal and as Mahatma Gandhi had stated a wise person accepts the essence of different scriptures like a bee gathering honey and sees only the good in all religions.

What makes our Sikh community stand out is their strong community value structure and organisational efficiency even though they are a small percentage of the population. Only around 2 percent in Jammu and Kashmir and the same in India. Despite this, their valour and bravery has earned them a healthy 8 percent representation in the Indian Army. And their humanitarian services make them the most visible community in any crisis.

Quoting examples, Nasir Hamid Khan stated that he had himself, along with the rest of the world, witnessed the various acts of selfless service and daring interventions made by the Sikh community.

Quoting several examples, he highlighted the role of Sikh organisations like United Sikhs Kashmir, Khalsa Aid and others who during the 2014 floods daily flew in lacs of blankets, food packets, essential medicines and other aid was provided to the needy and Gurdwaras were opened up for all.

In 2019, our society saw how the sikh community helped in bringing back stranded students from various parts of the country and escorted them back home to various districts of Kashmir. Then during the Covid pandemic, the Sikh community again came forward and among other interventions oxygen langars were introduced in Gurdwara’s which also offered food, medicines and free treatment to anybody in need.

Khan stated that this recognition comes only because of the unshakeable belief the Sikhs have in the teachings of Guru Nanak Dev Ji and other Guru’s who followed. The firm belief has led to a very selfless structure of values within the community which has been topped up by sheer organisational brilliance.

All the speakers expressed their gratitude for the efforts of the Managing Committee of Amar Singh Club for conceptualizing and organising this event which was a first of it’s kind.