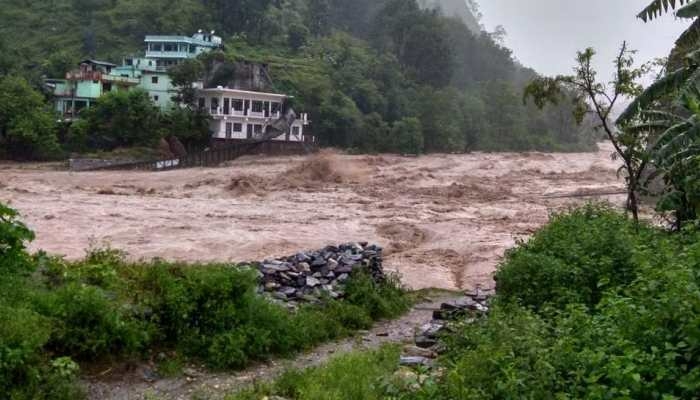 Monsoon is wreaking havoc in Uttarakhand. Seven people have been reported killed in rain-related incidents in the state capital of Dehradun alone. Schools have been ordered shut as a precaution. Heavy rains over the past two days has caused rivers to swell, and wash away bridges in some places. A heavy rain warning remains in place across the state over the next three days.
Of the seven people who have been killed, four died when a building collapsed in Dehradun’s Seemadwar. Three others were washed away in Dalanwala, Sahaspur and Balliwala.
Some off the highways in the state have been blocked by landslides. National Highway-94, which connects Chamba with Rishikesh, has been blocked by landslides near Fakot and Bhinnu. Efforts are underway to clear the blockages and re-open the roads.
Heavy rain lashed southern Himachal Pradesh and most parts Uttarakhand, causing a massive run-off of rain water into streams and rivers. Pictures (see above) emerged on Wednesday morning showing a bridge washed away in Pithoragarh, close to the border with Nepal.
The alert for heavy rain over Chamoli, Pauri and Rudraprayag districts remains in place for Wednesday. Reports say Uttarakhand Chief Minister Trivendra Singh Rawat has cancelled the leaves and holidays of all officers. They have been asked to stay at their respective posts in a bid to shave off response time to the extent possible
The rising water levels in the many rivers in the hll state is a particular cause for concern. The state had witnessed widespread destruction because of flash floods and landslides in 2013. The floods had killed 5,478 people and left thousands displaced. Over a lakh pilgrims were also left stranded by the landslides and bridge collapses.
The destruction caused by the floods was magnified manifold since the early spell of rain had caused debris to choke up some points of the rivers. When the flow further increased because of the higher-than-normal rain, the blockages caused by the debris was washed away with force, to devastating effect downstream.
The Indian Air Force, Navy and Army had been pressed into rescue services. They airlifted thousands of people to safety. Other major agencies involved in the rescue operations were the Indo-Tibetan Border Police (ITBP), National Disaster Response Force (NDRF), Border Security Force (BSF).
The floods had also revealed the extent of destruction caused by the wide scale of illegal construction in the state. Unauthorised overdevelopment had weakened the soil at a number of places, leading to ground collapses and more landslides.