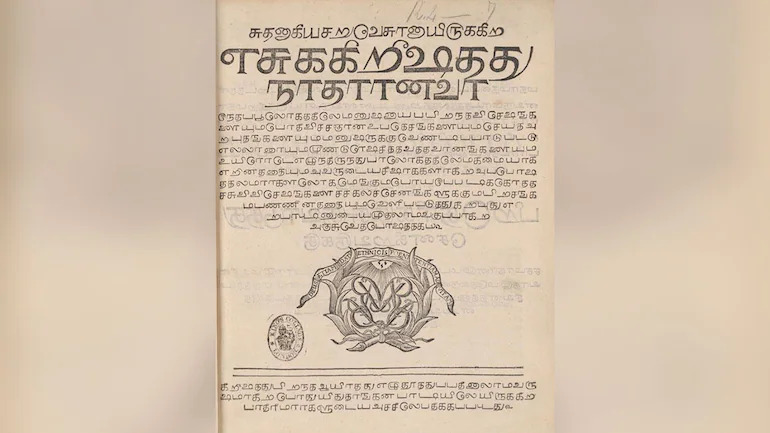 Sources in the Idol Wing told IANS that the department has commenced the process to bring the Bible back to India. An officer said that the Bible was stolen from Saraswathi Mahal Library in Thanjavur in 2005 and the theft is suspected to be the handiwork of a group of foreigners who had visited the library.

The deputy administrator of Serfoji Palace in Thanjavur filed a complaint about the theft with the Thanjavur west police station on October 10, 2005, and a case was registered a case but there was no progress.

Subsequently, in October 2017, Saraswathi Mahal Library administrator E. Rajendran lodged a complaint with the idol wing, and a case was registered and investigations launched.

After the progress was studied by Director-General, Idol Wing, Jayanth K. Murali, a separate team was set up in 2020 and a detailed study of the registry was painstakingly undertaken by the team during the period the Bible went missing and it was found that on October 7, 2005, the library had hosted a group of foreigners.

“We found that the visitors had come to India to attend a function to commemorate Bartholomeus Ziegenbalg, the Danish missionary who had printed the Bible,” Murali said.

An officer with the Idol Wing then scanned all the websites of libraries and private collectors associated with Ziegenbalg manuscripts and stumbled upon them at the King George III museum.

They were able to find the stolen first Tamil translation that was printed at a printing press in Tharangambadi in the 17th century and could match the stolen Bible with the one at the museum.

“We hope to retrieve the Bible and restore it to the Saraswathi Mahal Library under the UNESCO treaty soon. The wing has initiated steps to restore the Bible to the library,” the Idol Wing said.

The King of Denmark had sent Ziegenbalg to Tamil Nadu and he arrived in Tranquebar (The anglicized name of Tharangambadi), which was then a Danish colony close to Nagapattinam, in 1706.

The Protestant missionary translated the New Testament into Tamil in 1715. After his demise, another missionary Schwartz handed over the first copy of the Bible to Tulaji Rajah Serfoji, the then ruler of Tanjavur.

The Tamil Nadu government had kept this antique as an exhibit at Saraswathi Mahal Library.

The Idol Wing, in its statement, also said: “The value of the Bible is further enhanced as the cover of this antique piece bears the signature of the then King of Tanjavur, Serfoji.”