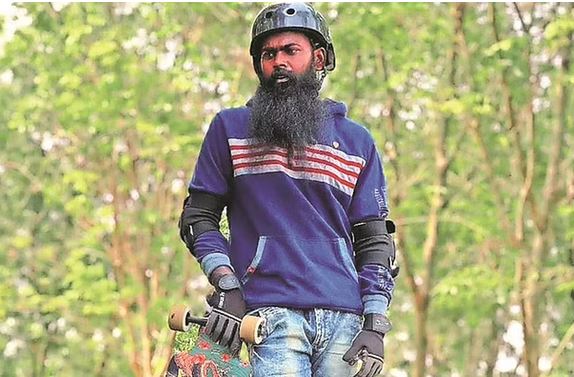 In a tragic incident, a youth from Kerala, who was out to set a world record by travelling all the way from Kanyakumari to Kashmir on a skateboard, was killed in a road accident in Haryana’s Panchkula on August 2.

31-year-old Anas Hajas, who hailed from Venjaramoodu in Thiruvananthapuram, had embarked upon a 3,511-km-long expedition on a skateboard on May 29 from Kanyakumari to Kashmir, in hopes of creating a world record. Halfway through the journey, Hajas was hit by a speeding truck while on his way from Pinjore in Panchkula to Nalagarh in Himachal Pradesh. Onlookers had informed the police after noting the registration number.

Despite being rushed to the neighbouring Kalka Government Hospital, Hajas was declared dead on arrival. “The autopsy of the deceased was completed by Thursday afternoon and the body has been handed over to his brother. The hunt for the truck (with registration number HP 12 G 9787) and the driver is on,” an investigating officer was quoted as saying.

ADVERTISEMENT
Tags: skateboarder killedskater killed in haryanaskating from kanyakumari to kashmir
No Result
View All Result