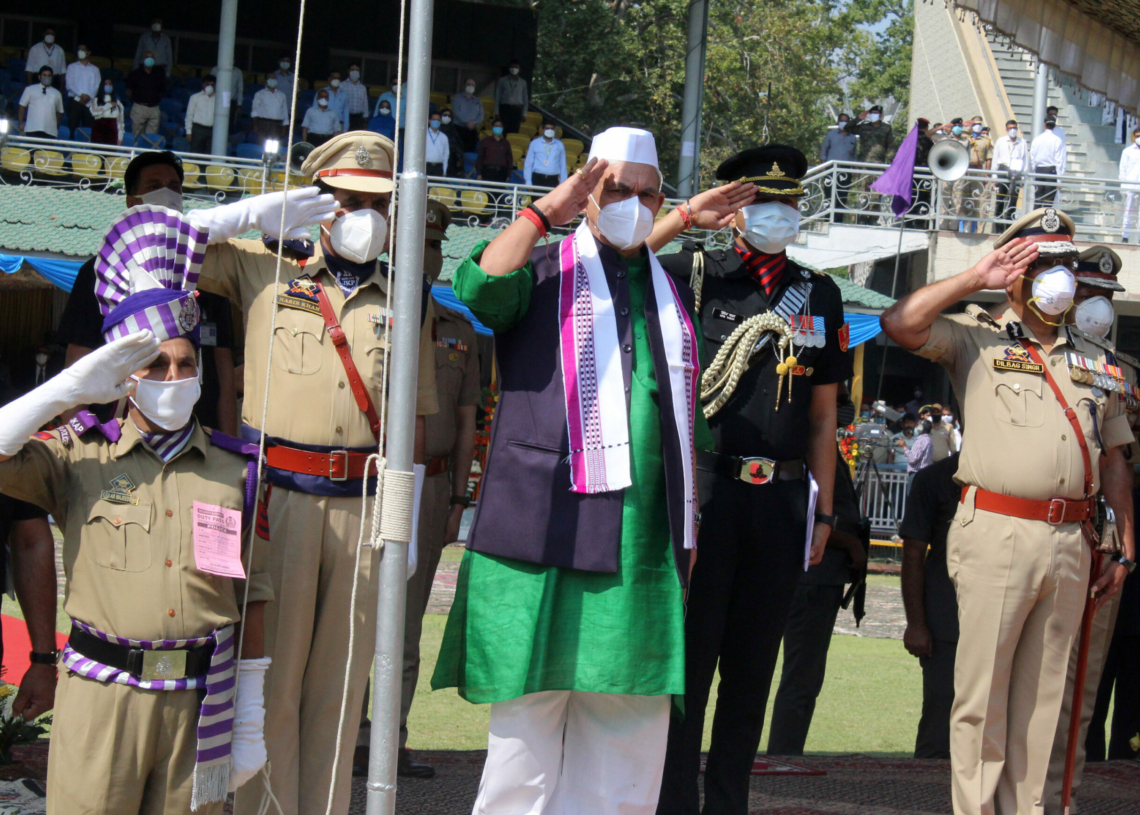 Srinagar: The cultural and religious mosaic of Jammu and Kashmir has survived all attacks and has always stood out as a beacon light for the entire country, Lieutenant Governor Manoj Sinha said on Saturday.

Addressing the main Independence Day parade at the Sher-e-Kashmir Cricket Stadium in Srinagar, Sinha said “when followers of the ‘Two Nation Theory’ were drawing a bloody line to divide the country, the people of Jammu and Kashmir stood out to join the national mainstream where all religions and cultures were regarded as binding forces and not as divisive forces.”

“Huge sacrifices were made by the people of Jammu and Kashmir to protect the sovereignty and integrity of the country.

“Brigadier Rajinder Singh (MVC) fought invaders in Uri and stood like a rock till his last breath to protect the sovereignty of India.

“Brigadier Usman laid down his life fighting the invaders in 1947 and his last words were ‘I am going, but let not the state go into the hands of the invaders’.

“The invaders were forced to turn back,” Sinha said.

He also said that Jammu and Kashmir is the land of the Prophet of Islam as it is that of Gautam Buddha and Lord Shiva.

“I am deeply impressed by the spirit of Hindu-Muslim unity of Jammu and Kashmir and this has been said best by Kashmiris poetess saint, Laleshwari when she said don’t think in terms of Hindu and Muslim because such narrow mindset will take you away from the greatness of your creator.”

Sinha recited the couplet in broken Kashmiri, but promised that he would soon learn the local language to communicate better with the locals.

He also spoke of the sacrifices made by local panchayat members making a special mention of Ajay Pandita and Wasim Bari, the two Sarpanchs who were killed by militants this year.

He said many wrongs occurred in Jammu and Kashmir in the past, but efforts were now on to set these right.

In his address, the Lieutenant Governor mentioned various developmental projects completed in the union territory and also of the ones which were nearing completion, including the rail link between Kashmir and Kanyakumari which he said would be in place by 2022.

He spoke of strengthening the anti-corruption bureau to ensure a corruption free Jammu and Kashmir, while adding that every citizen needs to be given an equal opportunity and ensured to do so during his tenure.

He also spoke of horticulture, agriculture, tourism, safe drinking water, smart cities for Srinagar and Jammu, IT parks, employment for youth and ensured an impartial merit based selection for all recruitments in the future.

Before his speech, Lt Governor Sinha unfurled the Tricolour inspected contingents of security forces becuse march past was not held due to the pandemic.

For the first time since mobile phone facilities were extended to Jammu and Kashmir, authorities did not suspend services in Kashmir on Saturday.

Mobile Internet facility was, however, suspended as a precautionary measure.