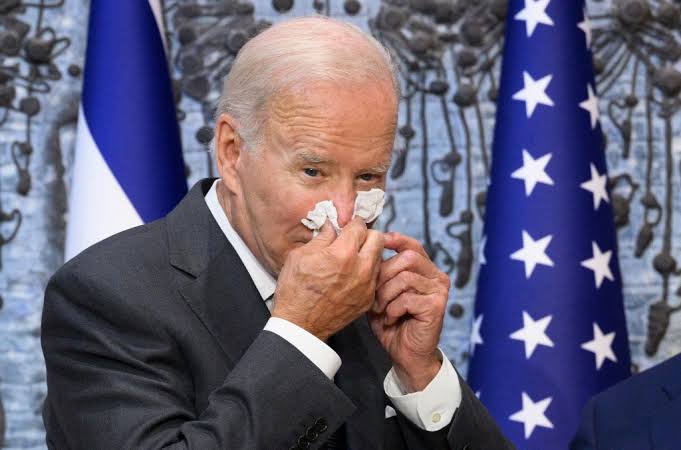 Washington: US President Joe Biden has tested positive for Covid-19 and will be self-isolating at the White House from where he will continue to carry out his official duties, the White House said in a statement.

Biden (79), who is fully vaccinated and has taken the booster dose, is showing mild symptoms and has begun taking Paxlovid, an antiviral used to treat Covid-19.

Kevin O’Connor, the President’s doctor, said in a statement that Biden tested positive in a routine morning screening on Thursday, first by an antigen test and subsequently through RT-PCR.

He added that the President was showing mild symptoms — runny nose, fatigue, and an occasional dry cough — and being fully vaccinated and twice-boosted, he is expected to respond favorably to the treatment as most maximally protected people.

The White House said Biden will work from self-isolation over the phone and on Zoom till he tests negative, which could take seven to eight days.

Jill Biden, the First Lady, has tested negative. She told reporters that she spoke with her husband in the morning and he is feeling fine. For herself, she said she intends to stay with her schedule.

Biden joins a growing band of world leaders to have tested positive for the virus that has killed 6.3 million people around the world and infected over 562 million.

Other world leaders to have been infected before include his predecessor Donald Trump and former UK Prime Minister Boris Johnson, who had been put in ICU, France President Emmanuel Macron, and Brazil President Jair Bolsonaro.

Jean-Pierre added, “Consistent with White House protocol for positive Covid cases, which goes above and beyond CDC guidance, he will continue to work in isolation until he tests negative. Once he tests negative, he will return to in-person work.”

Biden has been careful as he went about his meetings and trips abroad, but his exposure to so many people almost on a daily visit, as other world leaders, left him vulnerable to the virus, which is still around in its newest iteration, Omicron BA.5, in the US, experts said.

Trump was cavalier about Covid-19 precautions set out by his administration, shunned masks and belittled them, touted untested treatments, and freely met and interacted with people despite his history of being a germaphobe.

He and then first lady Melania Trump tested positive in October 2020. Those were pre-vaccination days and he may have concealed his symptoms as he participated in the first of the Presidential debates ahead of the November 2020 elections.

His condition had suddenly turned for the worse and he was airlifted to a military hospital outside Washington DC.

Trump received the best treatment available, getting medicines and treatments that had not been approved for general use until then and he had recovered soon enough and marked it with a triumphant return to the White House where he had dramatically ripped off his mask to prove he had returned unscathed.

Trump continued to display indifference to the virus and instead of publicly touting the benefits of vaccines that his administration had pushed through at remarkable speed, he quietly got himself vaccinated along with Melania before leaving the White House in January 2021.

Biden got vaccinated in full view of news cameras in a bid to encourage people to get themselves inoculated as well. Former Presidents Bill Clinton, George W. Bush, and Barack Obama had also volunteered to get vaccinated publicly and together featured in a video to spread the word.