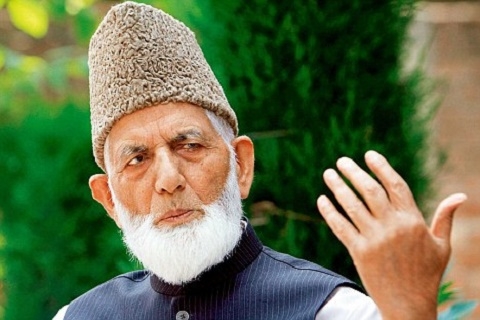 Srinagar, Sep 30: Courageously highlighting the Kashmir issue Pakistani Foreign Minister Shah Mehmood Qureshi has proved to be a friend and well-wisher of Kashmir, said Hurriyat Conference (G) chairman, Syed Ali Geelani.
He said that although UN has not lived to the expectations of the oppresses and suppressed nation, for which this forum came into existence, but reminding UN of this long standing and almost forgotten issue of Kashmir, Shah Mehmood Qureshi has once again reiterated Pakistan’s stand that unless the core issue of Kashmir is resolved as per its historical perspective and according to the wishes of Kashmir, dance of death and destruction will have no end.
Reacting to the UNGA speech by Indian Foreign Minister Sushma Sawraj, Syed Ali Geelani said that it was full of lies, deceit, arrogance and persistent denial of basic and ground realities. He said that we are neither surprised nor did we expect anything substantial to be delivered there. Because most people under the toxic influence of power and might, fail to accept truth.
He said that it is due to this arrogant mindset that India prefers to be in denial mode since the tragedy of Kashmir was born in 1947.
Claiming to be the largest democracy with multi-cultural society and a fast growing economic hub, it can’t dare to accept the bare and internationally recognized issue, not because they are not in know of the fact, but only because they believe that they can crush the genuine people’s movement with their military might. Geelani Sahab said that lies even repeated for centuries and by the whole world they still remain lies.
Hurriyat (G) Chairman said that it was expected from India to be in the cocoon of its denial, but we were really surprised that this was deviation from the universally accepted and recognized issue was softly and quietly tolerated, without causing any repels in the conscious and commitment of those sitting and listening in this august house.
They very well knew that 18 resolutions presently lying in this office clearly and loudly contradict the gentle lady delivering the sermon on the podium. By doing so, India has not only once again rubbed salt on our wounds, but has put a big question mark on the authenticity and effectiveness of this world forum whose relevance and authority has already faded from past few decades.
Speaking on the Indo-Pak tension, the Pro-freedom leader said that non-resolution of Kashmir is bone of contention between the two nuclear powers and if UN fails to play its role in solving this grave human issue not only Indo-Pak subcontinent but global peace and stability is under sever threat which make culminate in the world’s biggest human catastrophe.
Hurriyat leader while highlighted the need for a peaceful settlement of Kashmir issue, said that the coercive measures, killings, detentions and suppressions will yield nothing, instead will lead to devastation.