Mirwaiz thanks UN for report, says it was long due 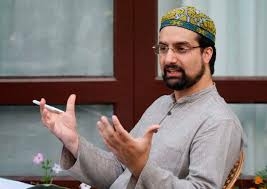 Srinagar, Jun 14: Hurriyat (M) chairman Mirwaiz Umar Farooq on Thursday welcomed the first ever UN report on rights violations in Jammu and Kashmir, saying the inquiry into the rights violations in the region was long overdue.
Taking to micro-blogging website, Twitter, Mirwaiz wrote: “Welcome the first ever UN report on HR violations in #Kashmir recognition of the grave HR violations by the state taking place in Kashmir for past 30 years in particular and calling for inquiry into them was long overdue.”
“UN has a moral obligation towards the people of Kashmir. People of Kashmir Thank the UN especially the bold efforts of its HR commissioner Mr Zeid Ra’ad Al Hussain for its support to right of self-determination and in preparing the report and making it public hope an enquirer commission is setup and announced soon by UN,” tweeted Mirwaiz.
Mirwaiz said the exhaustive and detailed report by the world body reflects the ground situation of Kashmir and details how the people here are denied all freedoms and justice and as a consequence suffer tremendously.
He said the demand for a Commission of Inquiry into these violations is not only the need of the hour but long overdue as UN and the world body owes it to the subjugated people of Kashmir.
“UN has a moral obligation to the people of J&K as the promises made to us by it have so far not been fulfilled,” he said.
Mirwaiz on behalf of the people of Kashmir thanked the UN body especially the High Commissioner for his earnest attempt in bringing the situation of human rights violations in Kashmir by the state in the global public domain besides asking for immediate end to the grave human right violations taking place here and for a meaningful resolution of the Kashmir dispute which is inclusive of the people of Kashmir.
While expressing his dismay over the reaction of Ministry of External Affairs of India which has described the report as prejudiced and rejected it, Mirwaiz said it is highly unfortunate that GOI instead of taking the report of the world body seriously and making amends in its repressive policy in Kashmir has chosen to attack the report.