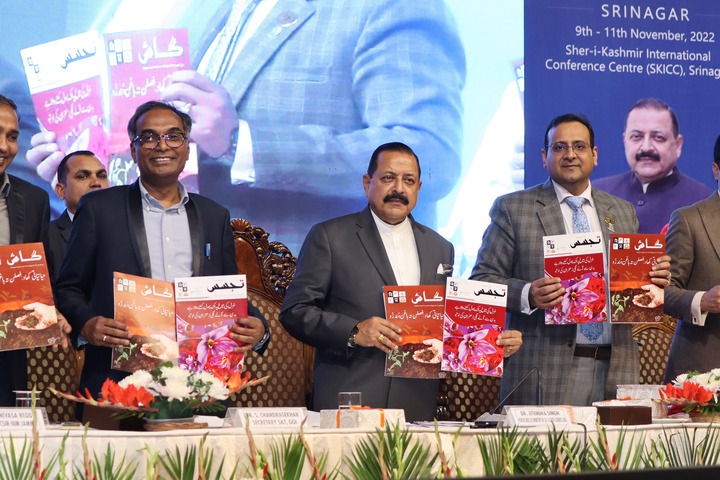 Srinagar, November 9: Jammu and Kashmir has a huge potential of becoming the hub of agri-tech startups and technology can value add to the products from the region with its immense biodiversity said Union Minister for Science and Technology Union Minister of State (Independent Charge) Ministry of Science and Technology; Minister of State (Independent Charge) Ministry of Earth Science; MoS PMO, Personnel, Public Grievances, Pensions, Space and Atomic Energy, Dr. Jitendra Singh at the inauguration of the three day ‘Kashmir Expo Start-ups for Livelihood’ today at Srinagar.

The expo is being organized under the aegis of the Department of Science and Technology, Government of India in association with National Innovation Foundation-India. In this three-day exhibition, youth who have started with innovation in various fields will also come to display their products, technology, and services.

Dr. Singh highlighted major sectors like agriculture, biomedical engineering, telemedicine and so on that can be the prime focus areas for startups in Jammu and Kashmir (J&K) and said that the area is fast evolving. He added that it is pertinent to inspire entrepreneurial brains by making the youth aware of the government support available to them based on their talent so that they can generate their own earning opportunities and become job creators. Bamboo grown in the state can be converted to several useful products including incense sticks (aggarbatti), while the shelf life of fruits like apples strawberries can be increased with innovative technologies”, he added.

The inauguration of the three-day event, which is the first-ever startup expo organised in Kashmir valley, was attended by a large number of Vice Chancellors, educators, entrepreneurs, government officials, scientists, and other stakeholders and can go a long way to encourage youth towards a vibrant startup culture in the Union Territory (UT).

“Since the launch of the Startup India initiative by the Prime Minister on 16th January 2016, the Indian ecosystem has grown to become the 3rd largest in the world. The 30 States and UTs with their own dedicated startup policies can go a long way to take the country to new heights,” Dr Singh stressed.

The Union Minister pointed out that J&K’s startup policy focuses on encouraging women-led startups by offering unique incentives, establishing a complete complaint-handling system for startups, and creating entrepreneurial knowledge cells at higher education institutions to foster the entrepreneurial spirit and assist student entrepreneurs and these steps can help boost the startup movement and increase the number of startups in the UT.

“India has emerged as one of the fastest-growing innovation ecosystems over the last decade. While most of the countries seem to follow an obvious innovation trend that is proportional to the development levels, India seems to have evolved as an exception,” he added. “India has climbed to the 40th rank in the global innovation index from the 81st position. This is a huge leap of 41 places in 7 years,” Dr. Singh stressed.

The Minister emphasised that science and technology-based entrepreneurship is taking on a bigger role in India’s innovation landscape as a result of the country’s increased emphasis on startup policies, the growth of its innovation ecosystem, and the rising willingness among scientists and engineers to explore this route.

Emphasising on the on the need to connect startups with the industry right from the beginning and making them sustainable to talked about the need for an integrated approach and theme-based projects so inspired youth can take the country to the zenith in the next 25 years.

He elaborated on how the Department of Science and Technology (DST) has played a catalytic role in fostering science, technology, innovation led entrepreneurship across the country through various programs and interventions by creating an environment conducive to continued innovation.

Aligning with Startup INDIA, National Initiative, DST launched a Program NIDHI (National Initiative of developing and Harnessing Innovation) in 2016 as a framework to offer a start-to-scale start-up support program. Dr. Singh explained that NIDHI is powered by an array of value-added programs and offers a range of funding support at various stages of startup journey, from fellowship to prototyping, seed to acceleration support.

He underlined that DST was also a leading player during Covid-19 crisis and building an Atma Nirbhar (self-reliant) India at the forefront of innovation and job creation. Thus, despite the economic distress caused by the pandemic, Indian entrepreneurs have evolved themselves to navigate these challenging times with support from the Ministry of Science and technology, which includes DST, DBT, and CSIR.

Secretary DST, Dr S Chandrasekhar stressed on the need for creation of an ecosystem of innovation throughout the country and nurturing of startups and beneficiaries in the remotest corners of the country so that He also said that the startups in Jammu and Kashmir can work with the different IIMs who can help them reach their products to the global markets.

Some science popularisation magazines and books in Urdu and Kashmiri by Vigyan Prasar and Central University of Kashmir were also released.
The expo, which showcased indigenous quality products and entrepreneurial talent from J&K as well as from different parts of India, could help motivate the local youth and students to cultivate an entrepreneurial mindset and contribute to social upliftment and new job opportunities, and economic development of the region.

The Union Minister also visited the exhibition showcasing a number of innovations at the Kashmir Expo.