In a filmi style, sharebroker fakes his abduction to avoid repaying loan 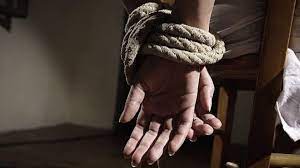 Lucknow: A share market trader in Uttar Pradesh staged his own kidnapping to avoid paying back a loan of Rs 40 lakhs.

Shamsi Raza claimed that he was allegedly kidnapped for ransom on Monday and ‘rescued’ by the Lucknow police on Thursday.

The investigation, however, proved that the trader, who was in debt, had staged his own kidnapping with the help of his two associates Shahid and Mohammed.

CCTV footage shows him hanging with friends, having tea, and using a resident’s car for kidnapping.

While police ‘rescued’ Shamsi, his two aides are still on the run.

DCP East and Crime, Prachi Singh said that Shamsi lives with his wife Farheen Fatima and two children in the Dargah Road area of Saadatganj.

“A relative living in Dubai had sent him Rs 40 lakhs,” she said.

Police said that Shamsi had also taken loans from several of his relatives and friends.

It was then Shamsi decided to stage his kidnapping and tell his relative that Rs 40 lakh that he had sent were spent on paying the ransom.

He had planned to use the money to pay his debts instead, the police said.

During interrogation, Shamsi told the police that he was being heckled by people from whom he had taken the loan and hence he, along with friends Shahid and Mohammad, hatched a plan for his own kidnapping.

According to the plan, on Monday Shamsi left without informing his wife and did not return home till late in the night. He had also switched off the phone.

In the night, Mohammad called Farheen, narrating the story of Shamsi’s kidnapping, and asked her to arrange Rs 40 lakhs.

Farheen was stunned by the ransom demand and informed the Saadatganj police.

In a joint statement, ACP Crime Pankaj Srivastava and ACP Bazarkhala Sunil Sharma said: “The team first got the CCTV where Shamsi was seen hanging with friends and then the number of the car carrying him. In the investigation, it was found that the owner of the car is a resident of Shamsi’s colony and was his friend. When the police interrogated him, it was found that he had given the car to Shahid at the behest of Shamsi. After this, the police made a route chart and recovered Shamsi.”