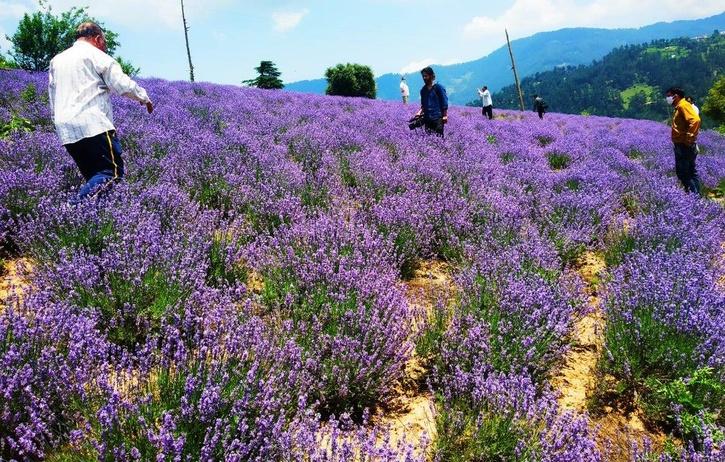 SRINAGAR, AUGUST 23:  Lavender cultivation has been amplified across Jammu and Kashmir.

Thousands of farmers are shifting to lavender cultivation which has proved very profitable.

According to statistics, 5000 entrepreneurs/ farmers are cultivating lavender on more than 200 acres of land which has led to 4 to 5 times increase in their economy.

Farmers traditionally in J&K grew cereals such as maize, rice and millets which didn’t provide great returns but with lavender cultivation, their earnings have gone up several times.

Lavender cultivation also called as ‘Purple Revolution’, is an initiative of the Central government to improve the incomes of farmers in J&K. Many farmers have given up traditional farming and switched to lavender farming for profitability.

Ali Muhammad, farmer from Pulwama area of South Kashmir said, “Traditional farming was not giving us good returns. We are very happy with switching to lavender farming. Lavender farming also does not get much affected by less rainfall”.

Cultivation of lavender has changed fortunes of farmers in Jammu and Kashmir under ‘Aroma Mission or Purple Revolution’, transforming lives of UT’s farmers community. It was launched in 2016 by the Union Ministry of Science & Technology through the Council of Scientific and Industrial Research’s (CSIR) Aroma Mission.

The aim of the mission is to support domestic aromatic crop-based agro-economy by moving from imported aromatic oils to home-grown varieties.

Lavender cultivation is practiced in almost all 20 districts of Jammu and Kashmir. Under the mission, first-time farmers were given free lavender saplings while those who had cultivated lavender before were charged Rs. 5-6 per sapling.

Farmers are happy with farming of unconventional aromatic plants under Aroma Mission. The mission promotes cultivation of aromatic crops for essential oils that are in great demand by the aroma industry.

In J&K, the Council of Scientific and Industrial Research (CSIR) and the Indian Institute of Integrative Medicine, Jammu (IIIM Jammu) are the two bodies responsible for implementation of Aroma Mission across J&K.

The CSIR Aroma Mission is envisaged to bring transformative change in the aroma sector through desired interventions in the areas of agriculture, processing and product development for fuelling the growth of aroma industry and rural employment.

It is expected to enable Indian farmers and the aroma industry to become global leaders in the production and export of some other essential oils in the pattern of menthol mint.

According to the Lavender farmers, the selling of at least one litre of its oil fetches them Rs 20,000. The farmers say that lavender grown over one hectare of land gives them a minimum of 40 litre of lavender oil.

IIM-Jammu also helps farmers to sell their produce as well as many private companies also procure lavender extracts from the farmers.

Notably, Doda district is leading the way and four distillation units have been set up by CSIR-IIIM Jammu in the district. Farmers from remote areas of district Doda reach these plants for extraction of lavender oil. More than 800 progressive farmers of Doda have adopted aromatic cultivation which has now proved out to be profitable.