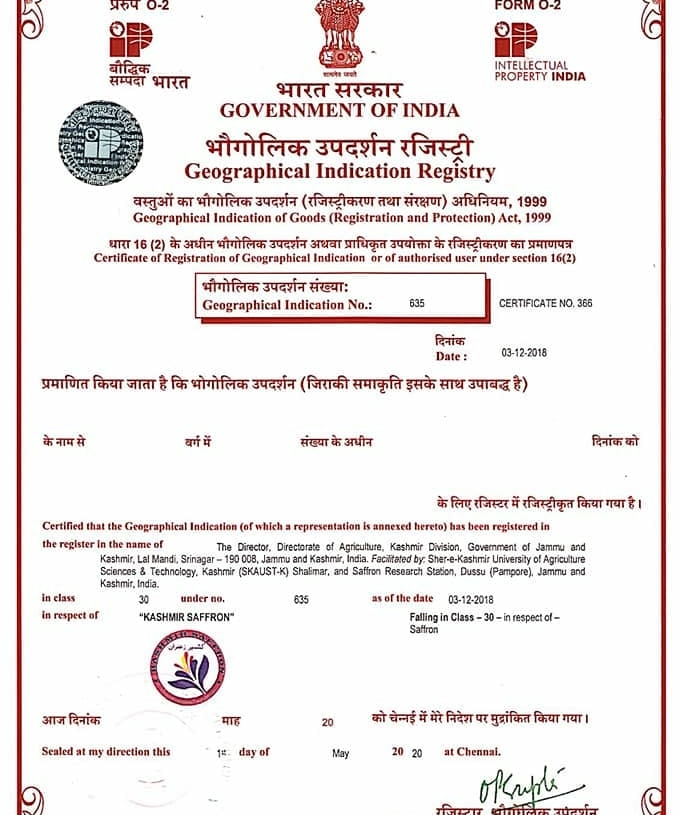 As per the documents, the Geographical Indication Registry has approved the GI tagging on the saffron with GI no 635.

Directorate of Agriculture has been declared as a registered proprietor of the GI of saffron falling in Class 30.

Kashmiri saffron, known for its quality and aroma worldwide, has been witnessing an invasion by cheaper Iranian saffron.

Iran is currently the largest producer of saffron in the world, cultivating over 300 tonnes every year on 30,000 hectares of land. In Kashmir, which ranks second in supply, saffron cultivation is limited to about one-eighth that area–3,715 hectares.

Due to the invasion by the Iranian saffron, the price of Kashmiri saffron dropped by 48% after 2007, the year when Iranian imports grew substantially.

Earlier in September 2019, Kashmir’s saffron farmers met the officials of the Geographical Indications Registry in New DelhiDeputy registrar Chinnaraja G Naidu then sought details of the method of production, the area under cultivation and the reasons for GI tagging.

“GI tagging is a must for our saffron. It will set apart our high-quality saffron from the cheaper varieties of Iran, Spain, and Afghanistan. Nearly 60% of Iranian saffron was shipped illegally via Dubai,” said Abdul Majeed Wani, a saffron grower and president of the Saffron Growers Association.

“A spice park coming up at Dussu in Pampore to brand and promote Kashmiri saffron is the solution to the problems of the entire industry. The [GI] barcode on the saffron will display everything –who is the grower, how much has been his yield and most importantly, the standards of his produce,” he said

Kashmiri saffron is of superior quality because of the higher concentration of crocin, a carotenoid pigment that gives saffron its color and medicinal value: Its crocin content is 8.72% compared to the Iranian variant’s 6.82%, which gives it a darker color and enhanced medicinal value.