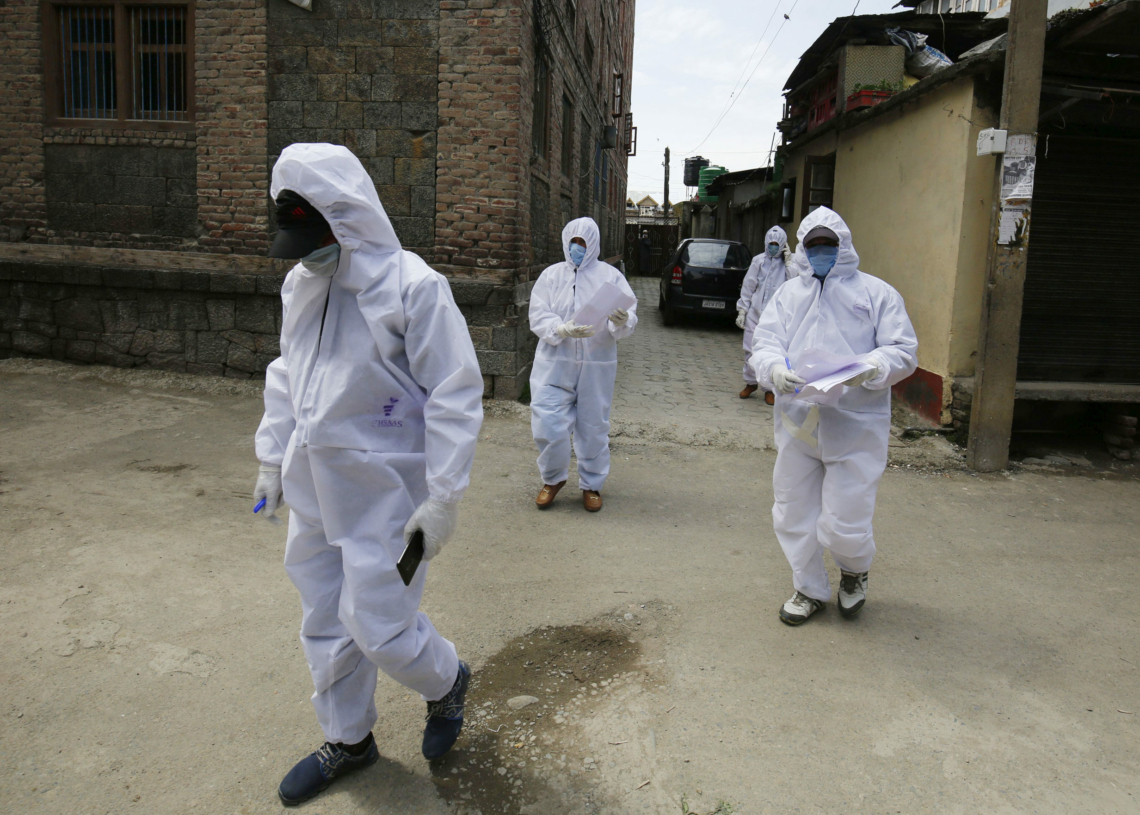 A medical team on the ground in Srinagar (File Photo: KM/Umar Ganie)

Srinagar: Two orthopaedic patients and seven cops were among thirty-seven persons who tested positive for the novel coronavirus in Jammu and Kashmir on Wednesday.

With these, the total tally of Covid-19 patients has risen to 971—874 in Kashmir and 97 in Jammu. Moreover, 466 people have recovered—57 in Jammu and 409 in Kashmir, leaving the active positive cases at 494 while 11 people have died due to the virus so far.

Dr Salim Khan, Nodal Officer COVID-19, said that 1163 samples were processed at CD Hospital Srinagar’s Microbiology Lab and 21 among them came out to be positive.

Sources said that eight samples received from District Police Lines Anantnag tested positive. They included a follower, two SPOs as many Head Constables, a Constable, a Selection-Grade Constable and wife of a cop. Except for the woman, none had come in contact with any positive patient, the sources said.

The other cases include six from Seer Hamdan–one 40-year-old woman and five men, two of them aged 30-years-old while three others include 38-year-old, 40-year-old and 45-year-old respectively.

Besides cases include a woman from Naibasti, 70-year-old from Fresal and 49-year-old of Mohammad Pora Kulgam, patients admitted to orthopedic ward GMC Anantnag besides 55-year-old man from Khiitaj.

Two cases include 26-year-old and 27-year-old women, whose samples were received from SDH Kokernag, they said.

Nodal officer for coronavirus control at SKIMS, Dr G H Yatoo, said that out of 1726 samples tested at viral diagnostic lab of the tertiary care hospital, 13 came out to be positive.

Professor Farooq Jan, Medical Superintendent SKIMS, said that seven of them are from Budgam—24-year-old male and 24 and 25-years-old women from Loripora, 23-year-old woman and two man—aged 35 and 45 years old from Watkul and a 21-year-old man from Zaipora, five from Basoli Jammu  and one from Baramulla—27-year-old from Dangiwachi.

Meanwhile, three more cases were reported from Jammu and include a 52-year-old man from Maanpur Kathua, 67-year-old from New plot Jammu besides a 75-year-old from Preet Nagar Jammu whose sample returned positive after his death.

According to the daily Media Bulletin, out of 971 positive cases, 494 are active positive, 466 have recovered and 11 have died.

Moreover, 11 more COVID-19 patients have recovered and discharged from various hospitals, two from Jammu division and nine from Kashmir Division.

Furthermore, till date 100683 travellers and persons in contact with suspected cases have been enlisted for surveillance which included 25393 persons in home quarantine including facilities operated by government, 149 in Hospital Quarantine, 494 in hospital isolation and 11694 under home surveillance. Besides, 62942 persons have completed their surveillance period.