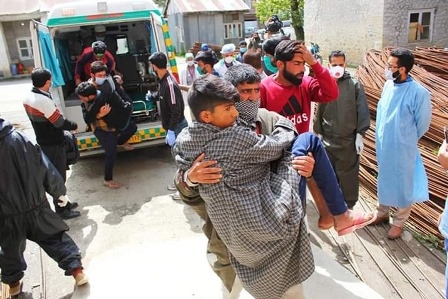 Srinagar: Seven persons, four of them minors, were injured after an explosive device went off in Ahgam area of Rajwara Handwara in north Kashmir’s Kupwara district on Sunday.

The incident occurred this afternoon when many boys were playing with the device found by two of them, Junaid Ahmad Khan (12) and his brother Tanveer Ahmad Khan (18) sons of Mohammad Ashraf Khan, from a forest area nearby their native Ahgam village, sources said.

The Ahgam area, sources said, is around 1.5 kilometers by radius even as it is around four kilometers away by road from Chanjimulla village where a colonel, a major and two soldiers besides a police sub-inspector were killed along with two unidentified militants in an overnight gunfight.

Sources said the injured were shifted to district hospital Handwara wherefrom four of them were shifted to SMHS hospital Srinagar for specialized treatment. They said around a dozen persons suffered injuries but only seven needed hospitalizations as others were given first aid for “very minor injuries” locally.

Meanwhile the in-charge Duty Officer said investigations are underway as to where from the device was brought from by these persons.

Asked that the sources say it was found by two of the boys from the nearby encounter site, he said: “Investigation is underway and nothing can be said with surety now.”