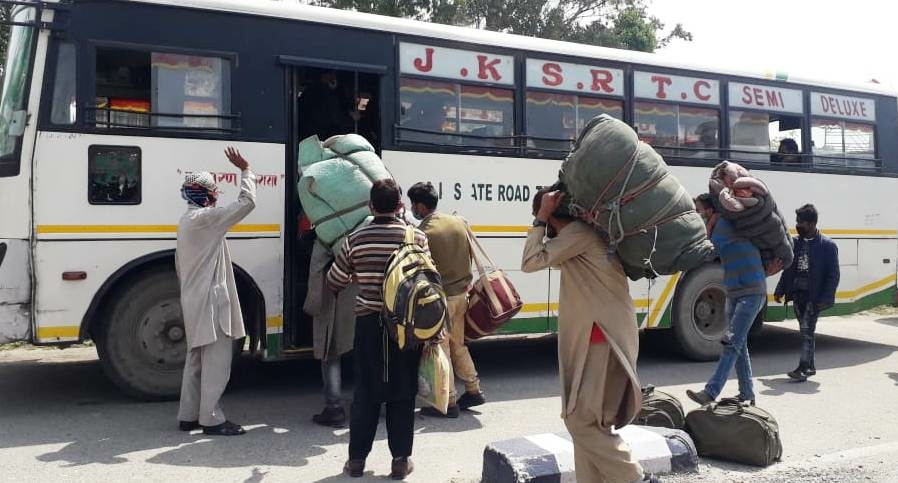 Jammu: The Jammu and Kashmir administration has chalked out a plan for the phase-wise return of the residents of the union territory including students and migrant labourers stranded in different parts of the country due to the COVID-19 lockdown, an official said on Sunday.

The administration, however, said all the returnees will be tested for coronavirus upon their arrival, the spokesperson said.

It also announced a 21-day institutional quarantine in Lakhanpur, the gateway to Jammu and Kashmir, in Kathua district for all those who arrive without prior permission of the administration.

The official said that the decisions were taken by Chief Secretary B V R Subrahmanyam during a video conference interaction with Deputy Commissioners while discussing the action plan for allowing local students and migrant labour to return.

The government has already initiated the process of bringing back students and labourers stuck in other states in a very controlled and regulated manner. More than 18,000 locals have reached Lakhanpur between April 25 and May 2, with majority of them arriving from Himachal Pradesh.

In the first phase, students and migrant labourers from Punjab and Himachal Pradesh would be allowed followed by other states.

“All those who will enter the UT without prior permission will be compulsorily sent to institutional quarantine in Lakhanpur, Kathua for 21 days,” the Chief Secretary emphasised.

Keeping in view the risk of transmission of the virus, it was decided that 100 per cent testing of all such people would be done to ensure their and others’ safety.

“All the Deputy Commissioners were asked to coordinate with the health department so that medical teams are deployed for the collection of samples,” the spokesperson said.

Asserting that nodal officers have been appointed by the administration for ensuring smooth entry and movement of people, the chief secretary asked the divisional commissioners to ensure that proper computerised record of all the returnees is maintained and a system is evolved so that the entire exercise is carried out smoothly.

To arrive at an exact number of the students and migrant labour stranded in different parts of the country, the chief secretary said that data is being compiled and would be shared with the districts so that all necessary arrangements are made for their stay.(PTI)