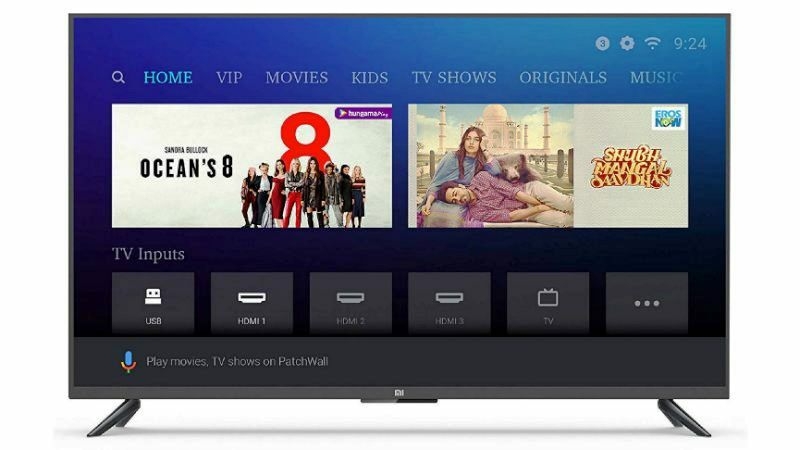 Xiaomi has piqued consumer interest in the smart TV segment by offering features that ensure great value in their budget televisions. Its latest Mi LED TV 4A Pro 49, for instance, has a solid feature set, Full HD and HDR, and PatchWall support. And the television runs on Android TV giving users to apps on Google Play store, Google Cast compatibility and voice search for content.
But what are the things you should know before buying one? Here’s my review after using the TV for little over a week.
Xiaomi Mi LED TV 4A PRO 49 specifications: 49-inch IPS FHD (1920×1080) display | HDR10 | 60Hz panel refresh rate | 10.9Kgs weight (with stand) | 2 USB ports | 3 HDMI ports | Bluetooth v4.2 | Wi-Fi | Ethernet |2 x 10W speakers | Amlogic 64-bit Quad-core chip | Mali-450 GPU | 2GB RAM | 8GB ROM | Android TV (Android 8.1 Oreo 8.1 |PatchWall
Xiaomi Mi LED TV 4A Pro 49 price in India: Rs 29,999
Xiaomi Mi LED TV 4A Pro 49: Design and build quality
TV 4A Pro 49 availability, Mi LED TV 4A Pro 49 features Xiaomi Mi LED TV 4A PRO 49 looks good, though it doesn’t come close to Mi LED Smart TV 4 in terms of design.
Xiaomi Mi LED TV 4A PRO 49 looks good, though it doesn’t come close to Mi LED Smart TV 4 in terms of design. The frame around the TV is narrow, but not narrow enough to be called bezel-less.
But the build quality is better than what you would expect for the price. You can either wall mount the TV or put it on a table top. I used the plastic stand to prop it up on a table. Mi LED TV 4A PRO 49 remote control may not be attractive, but it works as advertised. The built-in microphone and voice button offer Google Assistant support.
Xiaomi Mi LED TV 4A Pro 49: Ports and connectivity
Just on the back of the Mi LED TV 4A Pro 49, you will find three HDMI ports (including one with ARC), two USB ports, a coaxial connection for antenna or cable and S/PDIF for audio. In my opinion, three HDMI ports is enough for connecting a cable or satellite box, a game console, and a Blu-ray player.
Unfortunately, there is no 3.5mm headphone jack, but you can always connect the standard Bluetooth-enabled headphones with the Mi TV.
Xiaomi Mi LED TV 4A Pro 49: Picture quality and Audio
The 49-inch display ticks all the expected boxes for a budget-friendly TV: Full HD resolution, HDR 10 support and a native refresh rate of 60Hz. No, this is not a 4K Ultra HD TV. In our testing, I found colour accuracy to be accurate. This is pretty much identical to the results from any smart TV priced under Rs 40,000.
When it comes to contrast, it fared really well. I got the best results at default brightness settings. But I want to make one thing very clear: don’t expect the same level of colors and contrasts as in an OLED TV. Most LED-backlit displays do not show fine details like shadows and nighttime scenes really well. This is a common problem with LED-backlit displays.
The TV also offers HDR10 support, but other HDR formats like Dolby Vision aren’t supported. In our tests, the HDR performance was average at best. This TV set has a built-in set of 20W speakers. Fortunately, they offer room-filling volume with no noticeable distortion.
Xiaomi Mi LED TV 4A Pro 49: Android TV and PatchWall support
TV 4A Pro 49 availability, Mi LED TV 4A Pro 49 features PatchWall offers a wide selection of content in English, Hindi and regional languages.
This is the first TV from Xiaomi to run Google’s Android TV OS (Android 8.1 Oreo) along with Xiaomi’s custom PatchWall UI, apparently customised for Indian users. The user interface is easy to use and there is no learning curve, which is always a good thing. I don’t want to get into PatchWall UI again, as the interface has been used across all Mi TV smartphones in India.
Xiaomi has inked partnerships with a number of local OTT players (AltBalaji, Eros Now, SonyLiv, HotStar, Hungama, etc). PatchWall offers a wide selection of content in Hindi and regional languages. However, it is a shame that Netflix and Amazon Prime Video are still not supported, though the company did mention that the latter will soon come to Mi TV soon.
Since it is powered by Google’s Android TV platform, you can download various apps from the Play Store such as YouTube, Plex, among others. What I really liked about the Xiaomi Mi LED TV 4A Pro 49 is the way you can search for content using the voice feature on the remote control.
With a built-in Google Assistant support, you can search and access content from movies, TV shows to thousands of apps, with just voice commands. This feature was missing from the Mi LED Smart TV 4.
Xiaomi Mi LED TV 4A Pro 49 review: Should you buy it?
Yes. For most consumers looking for an affordable smart TV under Rs 30,000, the Mi LED TV 4A Pro 49 fits the bill perfectly. Of course, there are other smart TVs available in the market with top-of-the-line features and specifications, but they cost a lot.
If you’re a TV buyer who wants to buy a value for money smart TV with acceptable colour quality and HDR support, I will strongly encourage to buy Xiaomi Mi LED TV 4A Pro 49.