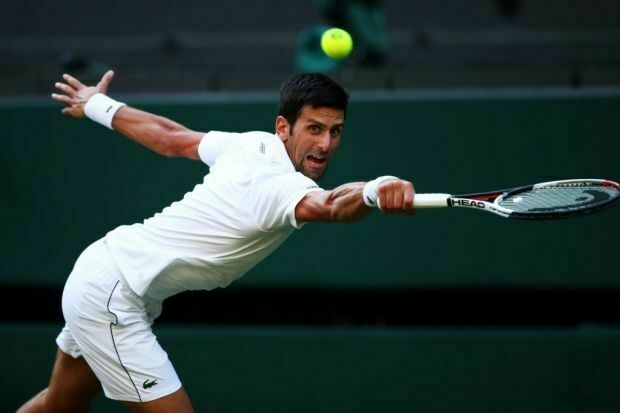 LONDON, ENGLAND - JULY 07: Novak Djokovic of Serbia returns a shot against Kyle Edmund of Great Britain during their Men's Singles third round match on day six of the Wimbledon Lawn Tennis Championships at All England Lawn Tennis and Croquet Club on July 7, 2018 in London, England. (Photo by Clive Brunskill/Getty Images)

Being scheduled to play last on Court One on ‘Manic Monday’ is something Novak Djokovic is getting rather used to – and also getting rather fed up with.
A year after his 2017 fourth round match was postponed by 24 hours into what is a designated ‘rest day’ for the men, he narrowly avoided suffering the same fate again.
With South African Kevin Anderson taking almost 3-1/2 hours to tame French showman Gael Monfils in a four-set thriller in the previous match, Djokovic was left with about two hours of daylight to complete his match against Karen Khachanov if wanted to avoid coming back on Tuesday again.
It was not until he walked off court after booking his place in the quarter-finals that he heard how close he had come to being bumped off Monday’s schedule. “Post-match I heard that the organisers were planning to cancel my match if Monfils and Anderson went to a fifth. Luckily for me it didn’t happen,” Djokovic said after he romped to a 6-4 6-2 6-2 win to reach the last eight for a 10th time.
“The last couple of games I couldn’t really see the ball very clearly, it was getting very dark… so I had to hang in there.” Djokovic was kept waiting in the wings till after 7pm local time before he could start swinging his racket against the Russian but there was no stopping the Serb once he got on court.
Although he was broken twice in the opening set, Djokovic was rattling through the games at supersonic speed. With the light fading fast, the 12th seed timed the conclusion to perfection, sealing victory at 8.50pm on his third match point after Khachanov dumped a tired backhand into the net to end a 20-stroke rally. But it was the organisers’ decision not to move his match to Centre Court, where the three scheduled singles matches had already finished long before Anderson and Monfils came off court, that irked Djokovic.
A year ago, officials refused to move Djokovic’s match with Adrian Mannarino on to Centre even though the court sat empty, while on Monday they opted to give priority to a mixed doubles encounter once Roger Federer, Serena Williams and Rafael Nadal had all swiftly booked their quarter-final berths. Asked if he had expected to be switched to Centre, where matches can go on till 11pm underfloodlights, the three-times Wimbledon champion said: “Of course, it’s always an option.
“It’s what I wished for. Like last year, I received the information that they can’t reschedule my match on the other court because of the tickets that are presold. I guess there are other factors that play in.” Being made to play his fourth round and quarter-final matches on successive days cost Djokovic dear last July as he not only ended up retiring hurt from in his last-eight contest but also had to call time on his 2017 season.