Vote for congress to keep communal forces at bay: Mir 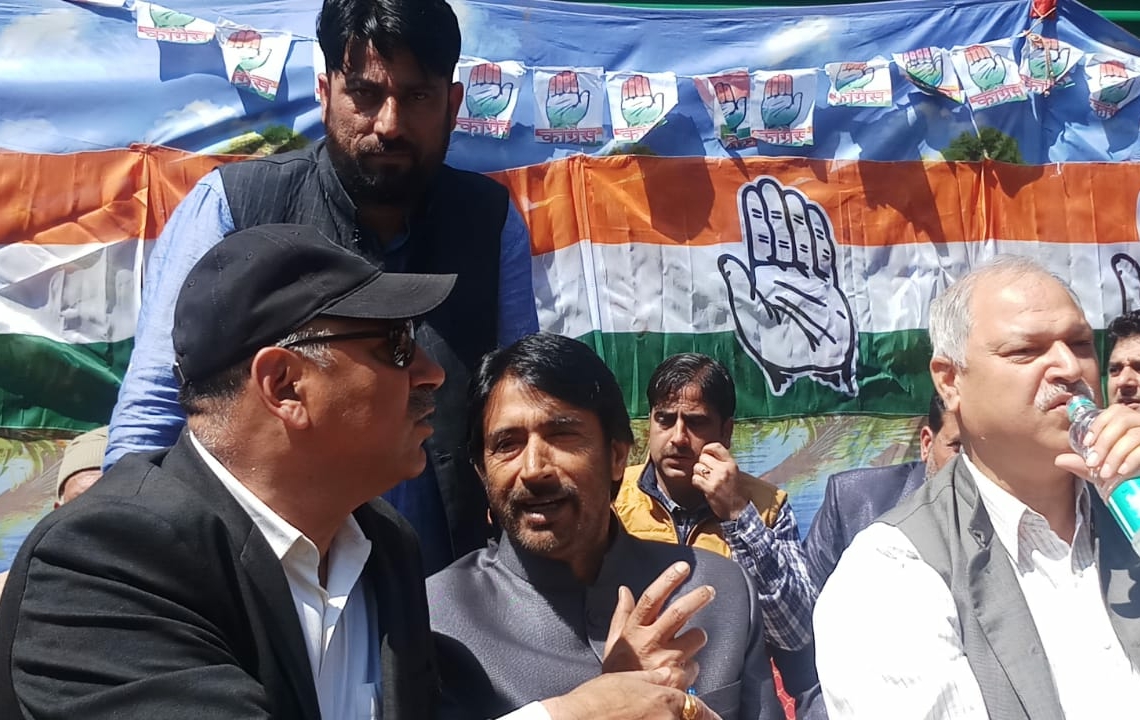 Srinagar, Mar 31: Urging people to exercise their franchise in favour of the Congress Party Candidates to ensure defeat of communal forces, the J&K Pradesh Congress Committee (JKPCC) President G.A. Mir has said that the upcoming Lok Sabha Election has provided best opportunity people to defeat the political exploitation on the Part of BJP PDP and other opportunist forces.
G.A.Mir said that Congress Party will continue to fight against the forces inimical to peace and development of the State, he also appealed the people to vote for Congress Party to keep communal forces at bay.
AICC Secretary Dr. Shakeel Ahmad Khan (MLA) also addressed the rallies and urged the people to forge unity on all fronts to ensure of fascist and disruptive forces.
JKPCC President G.A. Mir while addressing series of election rallies in Bandipora, Dangarpora Sopore has expressed confidence that Congress Party will win the election in the Country and State with a thumping majority, it will ensure defeat of Communal and fascist which are hell bent upon to divide people on religious and regional lines for the sake of coming into the power.
G.A. Mir was accompanied of Senior Party Leaders AICC Secretary Dr. Shakeel Ahmad Khan, Haji Abdul Rashid Dar, Gulam Nabi Monga, Usman Majeed, Farooq Andrabi, Haji Farooq Mir (Candidate), Imtiyaz Parray, Umer Kakroo, Irshad Wani, Basharat Buhroo, Nazir Lone and others.
Addressing the gatherings, G.A. Mir said the upcoming Lok Sabha Election was a direct fight between communal and fascist forces in the country, people should not forget as to what BJP has done during their five years rule in the country, they were feeling insecure under BJP Rule in the Country, he said.
BJP has brought miseries and exploited people on various counts for votes, but at the , Mir felt confident that people will defeat the politics of exploitation on the part of BJP and other forces to ensure of secular forces in the Country.
Lashing out at the previous PDP BJP Govt over adding woes to people, G.A. Mir reminded that since the PDP BJP assumed power in the State, things have gone from bad to worse, bloodshed, harassment of innocent people has been the hallmark of PDP BJP Coalition, despite the contradiction in their approach they enjoyed poor and continued to fool people on sensitive issues, he said.
I want to remind you (people) about the promises made by PDP in Kashmir and BJP in Jammu during the election in 2014 which have fallen flat, he said what happened to those promises, have they fulfilled any single promise during their rule Mir questioned and asked the people to give a befitting reply to PDP BJP and other opportunist forces for exploiting them and playing with their emotions, from time to time, he said
BJP is in habit of playing religious & emotional cards for electoral gains and emphasized the people to defeat their nefarious designs to ensure of Congress party with a thumping majority, Mir tells people.
JKPCC President felt confident that Congress Party will form the Govt at Centre and will get majority in State in Jammu and Kashmir State in the upcoming Lok Sabha Elections, he added and emphasized the people to forge unity and ensure victory of Congress Candidates, for the fact, it is the Congress Party alone which has the capability of safeguarding the interests of the people, besides ensuring that they do not suffer further on account of employment and facilities they deserve.
Addressing the rallies Haji Abdul Rashid Dar, Gulam Nabi Monga, and Usman Majed sought votes for Congress Candidate Haji Farooq Mir and appealed the people to ensure his victory with a thumping majority, as that, it is the Congress Party which has serve the people and will remain committed to serve them to the best of it’s ability.
On this occasion prominent political leader from North Kashmir Deen Cheeta joined Congress, Party leadership welcomed him.

Article 35A not an impediment to investment, dev in J&K: Sajad