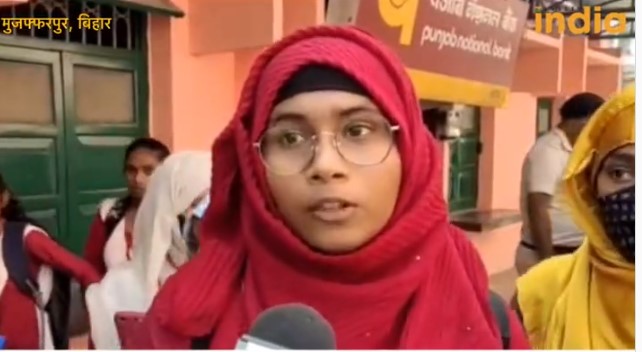 Muzaffarpur:  Bihar college is under fire after a student alleged that teacher made objectionable remarks when she refused to take off her headscarf during an exam.

The incident took place at the Mahant Darshan Das Mahila College, better known by its abbreviation “MDDM”, situated in the town’s Mithanpura locality where intermediate students turned up for their tests.

College Principal Dr. Kanu Priya said:  “She (student) was not prevented from wearing the hijab. She was only asked to reveal her ears since there were apprehensions that she might be carrying a Bluetooth device.

“Both sides were counseled by us and the exams were conducted peacefully. At present, lodging a case or deployment of additional forces in the area is not warranted. But we will keep a watch,” the SHO said.

The principal said, “Hijab was not an issue at all. Many students were carrying mobile phones, which was against norms. The girl in question was among those who were asked to leave their handsets outside the exam hall”.

The girl was only asked to reveal her ears as the teacher, who was one of the invigilators, needed to check if she was carrying any Bluetooth device, the principal said.

“If the girl had a problem with that, she could have informed the examination controller or me. But she had other intentions. She rang up the local police station and also some local anti-social elements she seemed to be knowing. When they arrived, she created a ruckus,” alleged the principal.

“She claimed that the teacher had called her an anti-national and taunted her with the remark that she should go to Pakistan. I was not at the examination hall at the time but other girls appearing for the tests have said it was a lie,” said the principal.

The college principal also claimed that it appears from records that the girl’s attendance has been very poor.

“The education department has issued instructions that no student with less than 75 percent attendance be allowed to sit for the final exams. The girl might have acted under the impression that this will browbeat the college administration and force it to be lenient in her case,” Dr. Kanu Priya said.

Wearing hijab in educational institutions was a major issue in Karnataka and the matter had reached the Supreme Court.

The apex court on October 13 delivered a split verdict on the ban on hijabs in Karnataka’s educational institutions and referred the matter to the Chief Justice of India for constituting a larger bench.