UP teacher worked in 25 govt schools, earned 1 crore in salaries 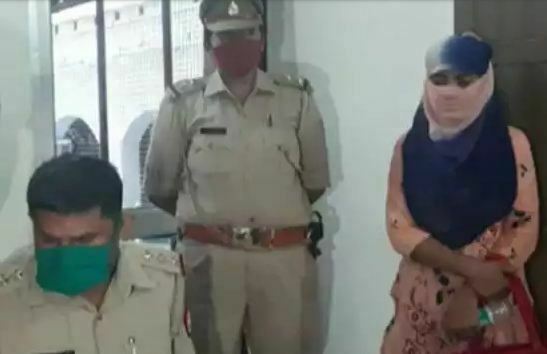 Anamika Shukla, a teacher who drew salary of Rs 1 crore in a year by showing she was working in 25 schools simultaneously, has been arrested by the Uttar Pradesh Police (Photo credit: ET)

Lucknow: A teacher employed in Kasturba Gandhi Balika Vidyalaya (KGBV) in Uttar Pradesh under the state basic education department worked simultaneously in 25 schools earning around Rs 1 crore as salaries for over a year.

The matter came to light after the department started creating database of teachers. A probe has been ordered against the teacher.

Anamika Shukla, who drew salary of Rs 1 crore in a year by showing to work in 25 schools simultaneously, has been arrested by the Uttar Pradesh Police in Kasganj, news agency ANI reported.

Shukla was arrested after she came to offer her resignation along with a person named Sanjay, who has also been arrested. “A notice was sent to the teacher, after we found that documents of Anamika Shukla are listed for multiple postings, following which she came to our office to submit her resignation. She has been handed over to police,” Anjali Agarwal, Basic Siksha Adhikari, Kasganj told ANI.

According to the the basic education department, digital database of the teachers are now being created and during this process it was found that the same teacher was employed at 25 different schools across districts in Uttar Pradesh.

Shukla, a full-time teacher working in KGBV, was found employed at 25 schools, simultaneously. She was registered as a teacher in districts such as Amethi, Ambedkarnagar, Raebareli, Prayagraj, Aligarh and others.

Despite a digital database in place, she managed to withdraw a salary of around Rs 1 crore from the department fraudulently for over 13 months till February this year.

UP basic education minister Dr Satish Dwivedi told India Today TV, “This matter came to light through social media and a probe has been ordered. In the preliminary investigation, we have come to know that documents of Anamika Shukla, posted as a science teacher on contractual basis, was used for recruitment in 4 districts and a sum of Rs 5 lakh was paid by the department. She is now untraceable.”

Further investigation is underway while an FIR has also been ordered against the teacher, said the minister.

Anamika Shukla is a native of Mainpuri district as per the records available with the department. The department has also sent a notice to the accused teacher but there has not been any response from her.

Her salary has been withheld with immediate effect while the education department is trying to find out if the same bank account was used for the salary transfers from different schools.