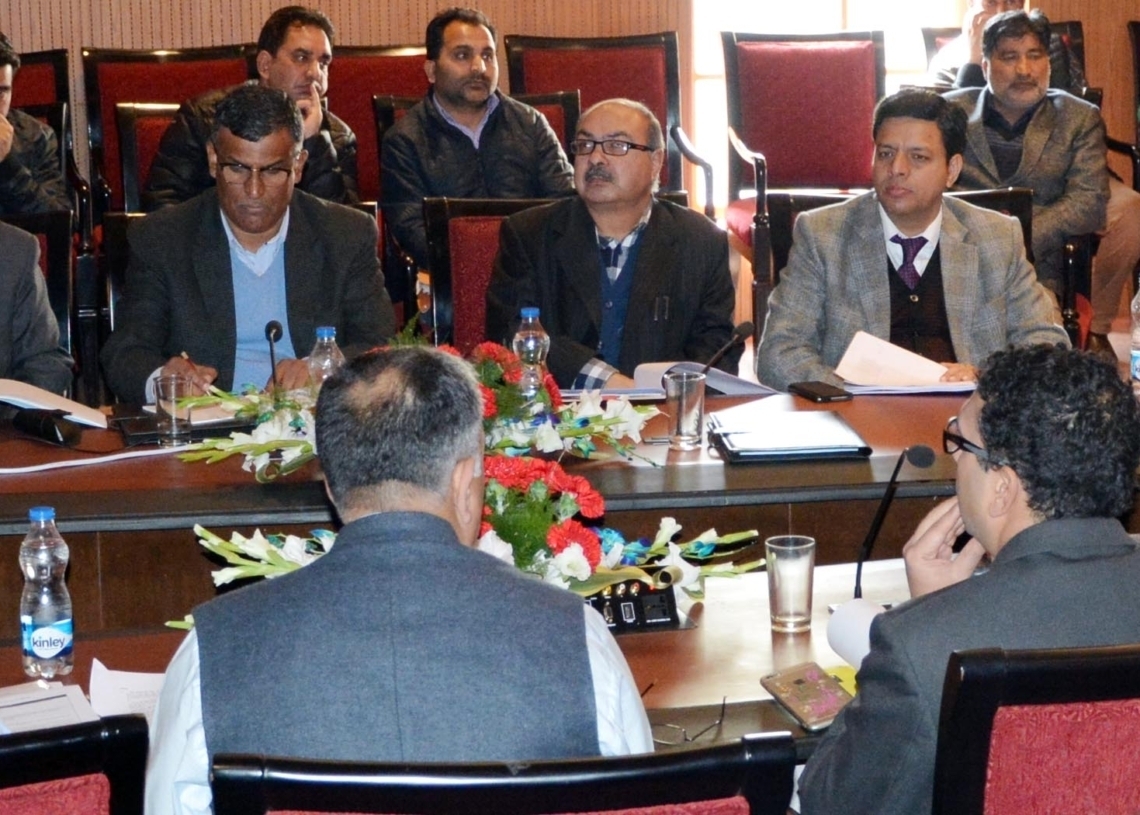 JAMMU, FEB 15:  Union Minister for Rural Development, Panchayati Raj Narendra Singh Tomar today urged the state to speed up the execution of Rural Development Schemes to achieve the goal of a developed country.
The Union minister said this while reviewing the implementation of various schemes under Rural Development in J&K State while Minister for Rural Development, Abdul Haq khan, Commissioner Secretary R&B Sanjeev Verma, Commissioner Secretary Social Welfare Sajad Ahmad Khan, Additional Secretary Rakesh Badiyal, Coordinator of the event- Mission Director BakshiJavedHimayun, Director Rural Development Kashmir and Jammu, RK Bhat and Syed Gazanfar Ali, Director Rural Sanitation and Panchayati Raj Nazir Ahmad Sheikh, Director Finance SL Pandita, Joint Director Planning Syed Shabir, State Nutrition Officer Tufail Ahmad Rathore and other senior officers of the state government.
The minister said that the development of country is intrinsically linked to development of villages as majority of the people live in rural areas. He said a developed  village guarantees a developed country and urged the officials to implement various RDD schemes in letter and spirit with special focus on the schemes related to employment generation, Road Connectivity, skill development and housing.
The minister expressed satisfaction over the implementation of various schemes so far and asked the government to further expedite the pace of work for better results.
Narendra Tomar said that the unemployment is the major challenge in the contemporary times and that skill development is the major way out to deal with the growing rate of unemployment. He said the State Rural Livelihood Mission is doing a wonderful job by developing a skilled youth. He said he was delighted to meet some of the Kashmiri youth in Delhi who are working in various sectors after getting skill development trainings in various domains.
Union Minister said that apart from development of rural infrastructure, the programmes like MGNREGA and skill development under Himayat can transform the lives of rural poor, besides augmenting their income. He said the Central government will provide every support to the state including Financial and technological with regard to the implementation of these schemes and will not allow people to suffer for the lack of funds.
He also reviewed the PMGSY works and said that construction of roads is route to prosperity and asked the state to lay stress on the implementation of Pradhan Mantra GramhSadakYojna and other related schemes. He said the roads in villages will set the villages on the track of development as more jobs will be created and business will flourish after the connectivity is increased. He urged the States to complete the road projects in timely to avail the Central funds and incentives as budget is no constraint for PMGSY.
The minister was informed that upto Phase X of PMGSY, 2410 roads and 108 bridges have been constructed at the sanctioned cost of Rs 8132.38 crore out of which 4085.92 crores have been spent up to January this year and has connected as many as 2035 habitations so far. Minister was informed that before the inception of PMGSY in the state the rural connectivity in the state was 58 percent which has been increased to 86.13 percent so far.
Earlier Minister for Rural Development and Panchayati Raj Abdul Haq Khan informed the union minister that the department has identified the rural connectivity a major challenge and hence took up the task to focus on rural connectivity in past few years and has constructed 679 bridges, 2283 culverts, 31337 roads during the period. He said the department has also constructed 2696 ponds, 885 check dams, 3617 water harvesting tanks, 561 play fields, 72 fisheries ponds, 55 Anganwari centers, renovation of 4622 traditional water bodies and 20143 micro irrigation works while providing jobs to 23.90 lakh persons.
He said to boost self-esteem and self-confidence of women folk especially living in rural areas, the biggest success of UMEED scheme in the State is that currently 2.08 lakh women are associated with the 22270 Self Help Groups formed under the scheme in 68 blocks of the State. He further stated that JKSRLM has also been entrusted with the responsibility of training and placing over 1.24 lakh State youth with an allocation of Rs 1,601.51 crore for a period of three years under Himayat Scheme
Earlier the union minister was received by Abdul Haq along with the coordinator of the event, Mission Director SRLM BakshiJavedHimayun and other senior officers of the department.

Deserving families in north Kashmir not getting benefitted from sponsored schemes