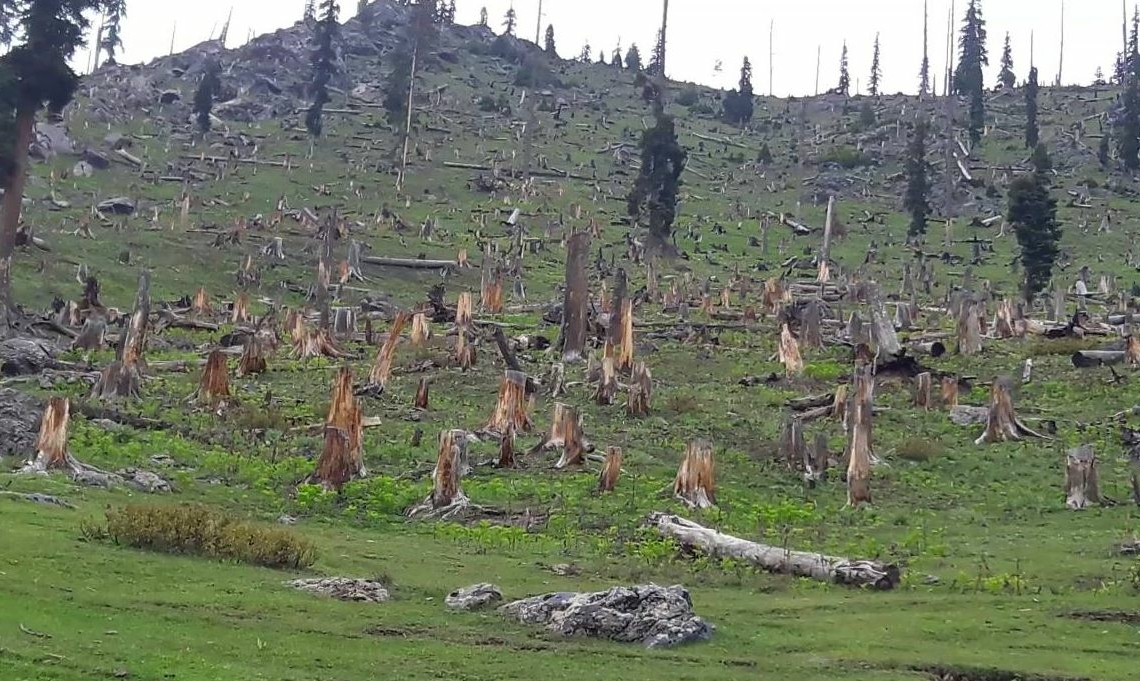 Budgam, May 21: The picturesque Tosamaidan here in Central Kashmir’s Budgam district has been completely disfigured by unscrupulous elements while those who are at the helm of affairs in the Forest Department are allegedly unaware about the loot of green gold that is going on at a massive scale.
Kabakoot Forest in the middle of Tosamaidan is presenting a horrific look as almost all the trees have disappeared while their stumps are only visible. This Reporter even saw at a couple of places stumps are on fire to destroy evidence.
Locals blame Forest officials for the mess. They claim, that top forest officials even lower rung employees of the Department are in connivance with Smugglers loot the green gold. This loot fetch them lot of money. There are still some who hold army responsible for the destruction of Tosamaidan. “It was a firing range that was used by Army. As long as Army was stationed here, nobody dared to visit here. Forest Department didn’t launch any afforestation drive after army left this range,” said a group of locals to news agency CNS.
When one looks around the Tosamaidan Kabakoot forest, he finds thousands of pine trees fallen flat on the ground. “This is so painful. Stringent punishment should be awarded to officials who allowed this loot,” said a teacher.
The irony is that Chief Conservator Forests Kashmir and DFO Budgam are feigning ignorance about this green gold loot. “Has it really happened? Have trees been cut and stumps set on fire,” questioned DFO Budgam Muhammad Rafique.
Similarly Chief Conservator Forests Kashmir said that he doesn’t know anything about it. “If it has really happened, action will be initiated against the guilty,” he assured. (CNS)