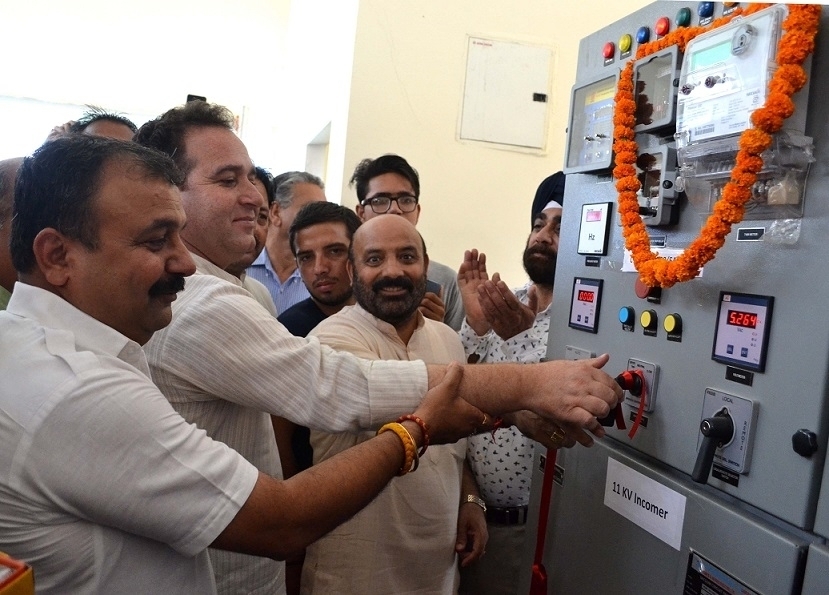 JAMMU JUNE 03: Government is taking concrete steps to modernize the power scenario with the upgrading of power infrastructure including  transmission and distribution network, said Minister for Power Development, Sunil Kumar Sharma here  on the sidelines of inauguration of 3 new Receiving stations here in the city peripheries
The Minister inaugurated 10 MVA 33/11 KV station at Hakkal under R=APDRP, 10 MVA, 33/11KV station at Barnai and 6.3 MVA,33/11 KV station at JWALA(Domana) in Raipur- Domana constituency.
MLA Bali Bhagat, MLC Vikram Randhawa, Development Commissioner Power, Asgar Ali , Chief Engineer, Ashwani Gupta, SE Ashwani Sachdeva, XEn Padam Dev Singh, XEn Sanjay Sharma and other officers of PDD besides Senior Politician, Baldev Singh Billawaria attended the inaugural ceremonies.
Listing development measures, the Minister said that the State is going through a positive transitional phase with key power sector being given due priority.
“String of Power infrastructure development projects have been started to improve quality and quantity of power supply to equally benefit the public, farmers, businessmen, industry and other trade and commerce,” he said.
Sunil Sharma said that the new Receiving stations were necessitated to meet the applied and future demand of the area,   achieve voltage stabilization and reduce load on the system.
The Minister informed that the Receiving Station at Hakkal shall   give a major relief to 13.15 MVA R/Stn Chatha by bi-furcating the load on newly constructed R/Stn. He added that now, both the stations will be under load and cater better power supply to general public of Chatha Hakkal and adjoining areas.
The Minister also interacted with the locals and listened to their demands pertaining to power supply in the area.
The Minister assured them that all their genuine issues and demands will be met in a phased manner.