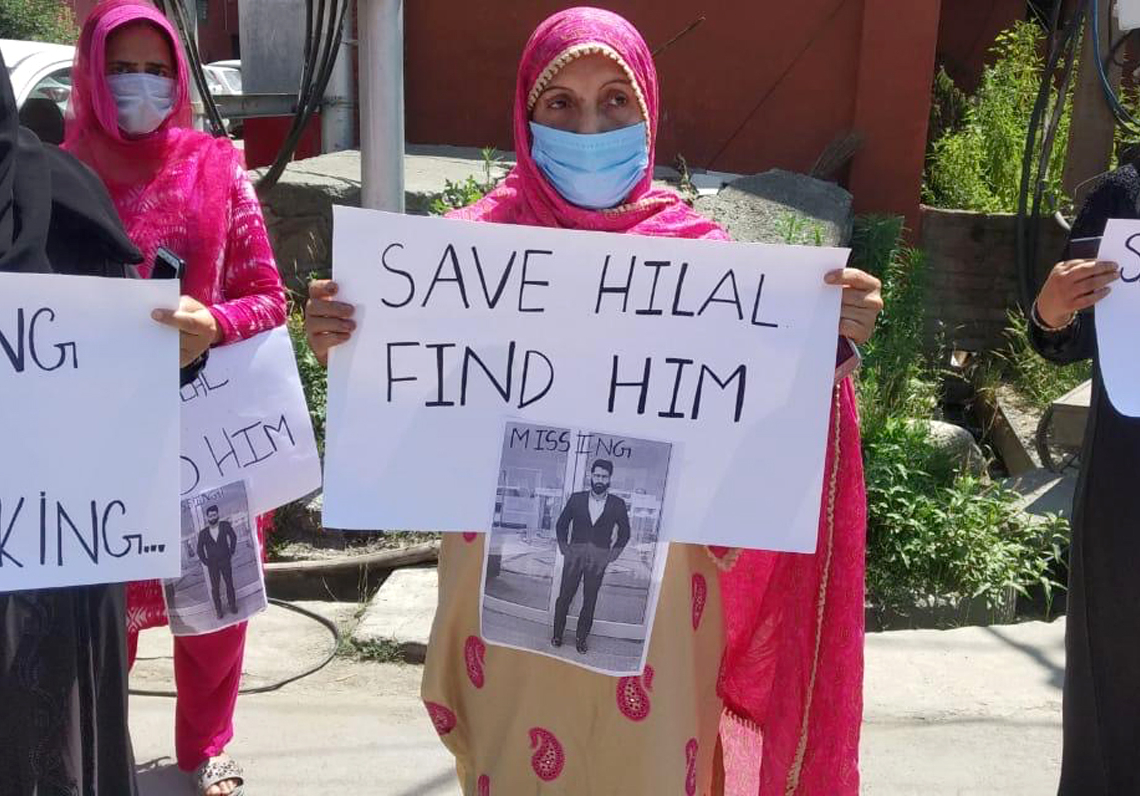 Srinagar: The family and relatives of 26-year-old Srinagar youth, who went missing during a June 13 trekking expedition to higher reaches in Naranag in central Kashmir’s Ganderbal district, Wednesday appealed to the authorities to trace him out.

Scores of family members and relatives of Hilal Ahmad Dar, son of Late Ghulam Mohi-ud-din Dar of Bemina, in Srinagar assembled at press enclave here, carrying placards requesting authorities to find and “save” him.

Hilal, who is pursuing doctorate in Management Studies at Kashmir University, had left for Naranag in Ganderbal district along with a group of five more trekkers at around 4 am on Saturday.

Mohammad Sadiq, Hilal’s maternal uncle told The Kashmir Monitor that the group had left on two scooties and a motorbike and Hilal was expected to return the same evening.

However, Hilal’s phone was continuously switched off during the day, his uncle said.

Eventually, the family, on Saturday evening, called one of the five youth who had gone with him, Sadiq said.

“He was at home and told us they had all come back. He said that Hilal was with them till 12:30 pm on Sunday before they started a trek uphill towards Nundkul (Lake). At Trunkol (meadow), Hilal told them that he was not feeling well and would not be able to trek any further,” he said.

Sadiq and other family members then travelled to Naranag on the same evening to search for Hilal.

On the morning of Sunday, the concerned police station in Kangan, Ganderbal also joined the search operation while questioning the five youth who had accompanied the missing person.

“They were asked to show their cameras and mobile phones. We too questioned them about why they had abandoned Hilal if he wasn’t able to trek any further? Why didn’t at least one of them stayed back with him?” the missing youth’s uncle said.

“We even took help from the local shepherds to find him but there is no clue of him,” he said.

Hilal has an MBA degree and has qualified National Eligibility Test, Sadiq said.

He has an elder brother while both of his parents have passed away.

Hilal, he added, had recently been admitted in the doctorate program at Kashmir University before which he was studying and working part-time in Delhi.

Aftab Ahmad, Station Head Officer Kangan Police Station said the five youth who had accompanied Hilal were, along with police and locals, helping them to trace him.

“We have questioned them. The youth however are assisting us in the search operation. So far we have not found any clue,” the officer said.

Hilal was yet to be found till Wednesday evening when this report was filed.