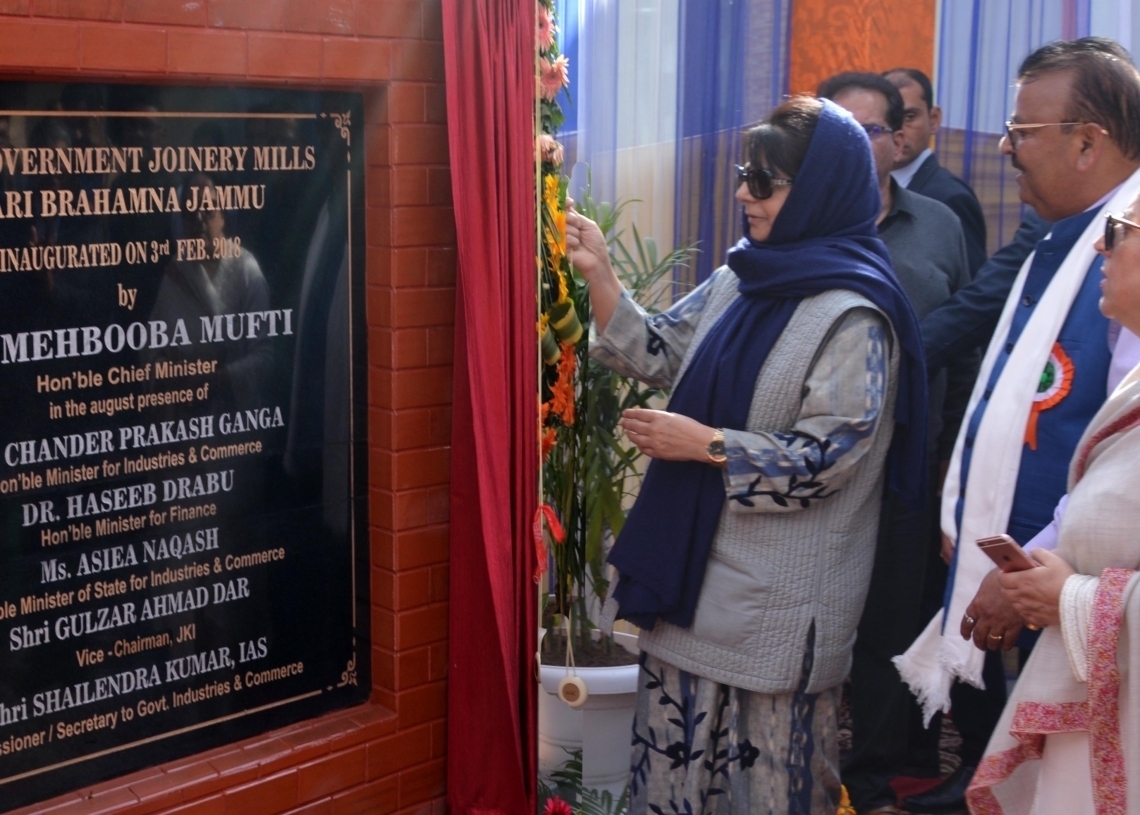 0
SHARES
3
VIEWS
Share on FacebookShare on Twitter
JAMMU, FEBRUARY 03: Chief Minister, Mehbooba Mufti today visited Bari Brahmana Industrial Estate and laid the foundation of a Silk Factory and Filature unit there. She also inaugurated the Government Joinery Mills and inspected the work at the EDI complex there.
To be built at a cost of Rs. 16.84 crore, the Government Silk Factory would be constructed in five months.
Mehbooba Mufti also laid the foundation of Government Silk Filatures to be built at a cost of Rs. 6.64 crore which too would be completed in the coming five months.
With the setting up of these units, first of its kind in Jammu province, the silk weaving facility from cocoon to yarn would be made available in Jammu province.
The Chief Minister later inaugurated the new Government Joinery Mills and showroom and display centre which she had laid foundation of in July last year. She went round various sections of the Joinery Mills and appreciated the products being manufactured there.
The Chief Minister was accompanied by Minister for Industries and Commerce, Chander Prakash Ganga; Minister for Finance, Labour & Employment, Dr. Haseeb Drabu and Minister of State for Industries & Commerce, Asiea Naqash.
The Chief Minister, on the occasion, was also briefed about a Silk revival plan by Commissioner-Secretary, Industries & Commerce, Shailendra Kumar.
The plan envisages revival of Raj Bagh, Solina, Nowshera, Bari Brahmana and other silk rearing units in the coming years. As per the plan, the Government would be infusing adequate funds into the revival of these units to generate a final produce of 10 lac metres of silk per annum in the State.
On the occasion, a deputation of employees of J&K Industries Ltd. met the Chief Minister and thanked her for the steps taken for the revival of their corporation. These steps, they said, would secure their future and they vowed to work for the betterment of the Corporation.
During the visit, Mehbooba Mufti also inspected the on-going work at the Jammu campus of Entrepreneurship Development Institute (EDI) at the Industrial Estate. The foundation of the campus was also laid by her on July 09, 2017. To be built over a cost of Rs. 82.89 crore, the Jammu campus of JKEDI is scheduled to be completed in three phases spread over a period of three years. It would have all the facilities like incubation centre, hostel, library and other interactive facilities for young entrepreneurs.
On the occasion, Director, EDI, Dr. M I Parray briefed the Chief Minister about the progress on the project. He informed her that the Institute will be made operational from the new campus soon.
Principal Secretary, Finance, Navin Choudhary; Commissioner-Secretary, Industries & Commerce, Shailendra Kumar; Divisional Commissioner, Jammu, Hemant Sharma; IGP, Jammu zone, SDS Jamwal; Deputy Commissioner, Samba, Sheetal Nanda and other senior officers accompanied the Chief Minister during the visit.
ADVERTISEMENT
ADVERTISEMENT
Tags: state
Next Post

What stops you from banning channels which spread hatred: Rasheed asks Mehbooba