Sethi appears at ICC hearing in compensation case against BCCI 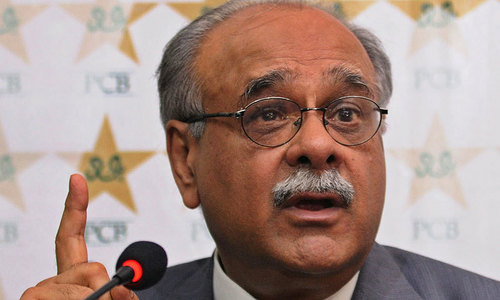 DUBAI: International Cricket Council’s Dispute Resolution Forum heard Pakistan Cricket Board’s $70 million compensation claim against the Board of Control for Cricket in India (BCCI) for allegedly not honouring bilateral series agreement.
Monday was the first day of the hearing and it will conclude on Wednesday.The three-member ICC panel headed by Michael Beloff, along with Jan Paulsson and Dr Annabelle Bennett heard first day’s proceedings.
For Pakistan, former PCB chairman Najam Sethi appeared as a witness before the ICC’s Dispute Resolution Committee and presented his arguments. The PCB is being represented by Khwaja Ahmad Hosain, Advocate Supreme Court of Pakistan, Alexandros Panayides of Clifford Chance, London, Lawyers from Clifford Chance, London.
The BCCI is being represented by Dubai-based law firm Herbert Smith Freehills along with British Lawyer QC Ian Mills. BCCI’s own battery of Indian lawyers are also present at the case, an India Today report said.
The PCB’s contention has been that the Memorandum of Understanding (MoU) signed in 2014 by erstwhile BCCI secretary Sanjay Patel is binding. The MoU stated that the two neighbours were supposed to play six series in eight years between 2015-2023.
Four of those series was supposed to be hosted by Pakistan that included 24 matches across three formats. The six tours would have constituted 56 games which included 14 Tests, 30 ODIs and 12 T20 Internationals.
However, the BCCI maintained that the contract is no longer legally binding as the PCB didn’t support BCCI’s ‘Big Three’ revenue sharing model where India, Australia and England would have got bigger share of the profit pie.
“There is no question of even paying a single penny to the PCB. They went back on their promise. The agreement was based on their support for our revenue model,” a senior BCCI official said according to the India Today report.
The BCCI has also maintained that unless the government of India gives green light, it will not be possible for them to play a bilateral series against Pakistan.
“We have been pretty consistent in our stand that without government approval, we won’t be able to play Pakistan,” said the official.
Many PCB officials feel that the BCCI has not shown enough intent or purpose to convince the government as no Test series has been played since 2007.
Since the 2008 Mumbai attack, the situation between the nuclear-armed neighbours has been pretty sensitive.
PCB chairman Ehsan Mani during the recent Asia Cup told the mediapersons that situation had gone “beyond amicable settlement”.
“This process has already gone beyond resolving it amicably. Had I been involved when the dispute happened, every effort would have been made to sort it bilaterally. Unfortunately, we are where we are. We have to still progress, but my doors are always open,” said the former ICC president, who has just taken over from Sethi.