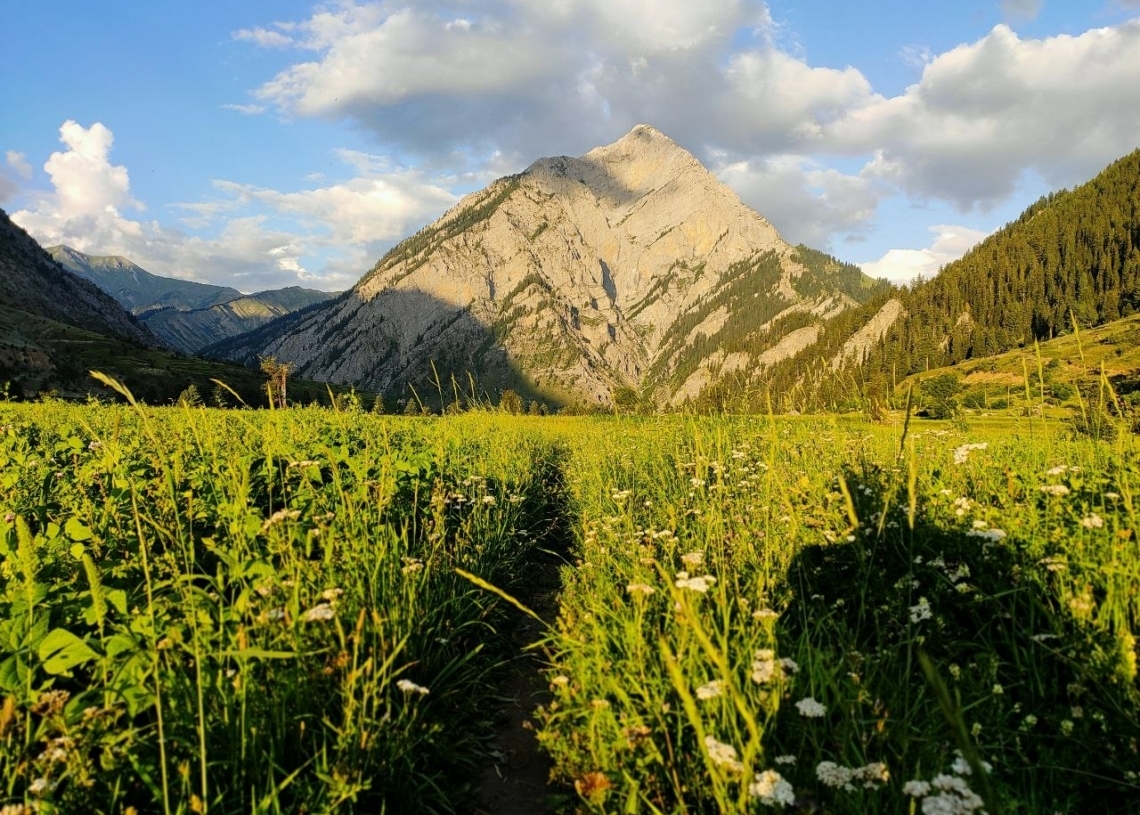 “Agar firdaus bar roo-e zameen ast, Hameen ast-o hameen ast-o hameen ast (If there is ever a heaven on earth, it’s here, it’s here, it’s here). I shall never tire of these popular lines on Kashmir’s beauty that are music to my ears. Except, there is every chance that you may get lost in the rich maze of Kashmir’s culture when trying to explore it through its places, food, and shopping. This piece is an attempt to make you at one with Kashmir while travelling. An attempt to help you explore the unsung heroes of Kashmiri beauty, taste, and shopping. Let’s dive in!

Located around 100 minutes from Srinagar Airport by road, Yousmarg is a detoxication from city life. The tranquillity offered by the picturesque views, the simplicity of pony-riding amidst the natural beauty of Yousmarg, or the beautiful trek to Nilnag Lake makes it one of the best places to explore Kashmir’s beauty.

Yousmarg literally means ‘The Meadow of Jesus’. While highly disputed local legends claim that Jesus himself stayed at Yousmarg for some time, this is where he was buried, and his tomb is located at, what is indisputable is that Yousmarg has absolutely nothing touristy to offer except hours of peace with occasional sounds of horses whining in the distance. It has got to be on your list of offbeat and lesser-known destinations in Kashmir. April to June is an ideal time to visit Yousmarg.

Winters are difficult when it comes to accessing Yousmarg. Many villagers themselves move to the lower areas for a couple of months during the winters. September is full of lush green meadows left behind by the monsoon after its passage and October turns all the green to orange with the onset of Autumn.

And if you love dense pine trees, the place has plenty to offer. Yousmarg has highly unreliable mobile connectivity. Spend at least one whole day at Yousmarg.  Two is even better. The JKTDC Tourist Bungalows & Huts are good for spending the night. Nothing luxurious about them. Else, one can even trek all the way to Sang-e-Safed (a valley of white rocks) and pitch a tent there. It is recommended that you hire a local villager for trekking. Also, there are plenty of spots in Yousmarg where you can simply pitch your own tent.

Mahmud of Ghazni and Ranjit Singh had attempted to invade the Kashmir Valley via the Tosa Maidan route from Poonch Valley. Tosa Maidan is in the heart of the mighty Pir Panjal range. The trek is indeed arduous and it was only recently made accessible to the public when the lease of the Army expired in 2014. Tosa Maidan lies to the west of Doodhpathri (another place just for scenic views). Hire a guide for this trek. Some even argue that the verdant landscapes of Tosa Maidan leave even Gulmarg far behind. The entire trek and the final destination have no dearth of majestic views. You may even visit the local villages like Khag, Drang, Poshkar, Khan Sahib, and Kachwari around it for the real colours of Kashmiri rural life.

At 5:00 am sharp. That’s the peak hour – right when it opens. Hire a shikara and get mesmerized by a burst of life, vegetables, boats, and colours. Most of the produce sold is grown in the floating gardens on the Dal Lake. A lot of them are harvested only a couple of hours before being offered in the market. Bangkok may be famous for its own floating markets but the one on Dal Lake is truly mesmerizing. It is deemed to be the second largest floating market in the world behind the one in Vietnam’s Mekong Delta. Remember, 5:00 AM – you will have beaten most tourists to experience the market at its best.

Sticking to the LOC on the Indian side, Gurez is entirely blocked off during winters. It is arguably the most beautiful hidden gem of Kashmir. Tourism was not permitted from 1947 to 2007. Permits are not required for Indian citizens anymore, however do carry a valid identity card. It is located around 5 to 6 hours away from Srinagar. You will spot army posts around as it is a military controlled region. The locals here embody the spirit of ‘Guest is God’. Moreover, they have Baltic origins, belong to one of the oldest tribes of Kashmir, and even have their own language called Shina. Though there is a dearth of accommodations here, many locals will be glad to welcome you into their homes – some may charge a modest sum while others will refuse money. An article in The New York Times describes the unlimited beauty of stepping into Gurez as stepping into Shangri-La.

Pahalgam, Sonmarg, Gulmarg, and Srinagar are indeed the usual suspects in the itinerary of most tourists in Kashmir. They are wonderful, no doubt. So are the usual suspects when it comes to attractions like Shankaracharya Hill, Dal Lake, Hazratbal Mosque, Indira Gandhi Memorial Tulip Garden, etc. Then we have the usual suspects when it comes to activities that include gondola cable car ride and shikara rides. Kashmir is also rich in adventure sports like mountain cycling, skiing, and paragliding. In fact, you can even do exclusive mountain bike trails in Kashmir like the Yousmarg trail and Pahalgam trail at packages ranging from INR 10,000 – 36,000 with the help of professional guides.

If Popeye were to visit Kashmir, he would be deceived into eating Haak as it looks quite like spinach. That’s the only similarity between Haak and spinach – they look alike. Haak is Kashmiri Saag that is cooked with mustard oil and spices like heeng, cardamom, and dry ginger powder. It is important to note that it is neither the Mughlai Saag Paneerwala nor is it the classic Sarson da Saag. Kashmiri Saag is Kashmiri Saag. Soupy and aromatic, the traditional way of having Haak is making a well in the centre of a rice plate and ladling it with soupy greens in the middle. Haak is a vegetarian dish made with a variety of greens. Different greens grow in different seasons in different parts of Kashmir. Hence, the different ‘greeny’ combinations in multiple recipes of Haak. It is a poor man’s food that even a rich man ought to have for the love of Kashmiri cuisine.

Do you like tea? Kashmiris have Chochworu and nun chai while the West has Donuts and coffee. This soft round bread has a soft upper half that is sprinkled with til (sesame seeds) or Khaskhash (poppy seeds). Chochworu is such a cute and funny name – do hear a Kashmiri saying it and you will know why. These local donuts sure look cute and are a delight as an evening/afternoon bread.

Also called shir chai, gulabi chai, or pink tea, you have got to explore Nun Chai (Noon Chai). It’s made with gunpowder tea, milk, and baking soda. A Kashmiri bread along with it is a recipe for delight.

Vouched as absolutely mouth-watering by Kashmiri food fanatics, Seek-e-Tujj is Kashmiri barbeque at its best. It is the Kashmiri version of minced mutton held through iron rods and roasted over red-heated ember. Absolutely Yumza!

Harisa is to Kashmiris what Haleem is to Hyderabadis. The texture of this coarsely grounded wheat mixed with meat and seasoned with spices feels like porridge or gruel. So, what’s the difference between Harees and Haleem? Simple – Haleem has three times more mutton in it than Harees. Boko Boko sells like hot cakes during winter mornings and flies off the shelves completely in a few hours. Keeps one warm for the rest of the day. It is not recommended during summers. Emperor Humayun was so fond of Harees that it was a part of his Mughal meal.

Kashmiri cuisine is mouth-watering. Period. It’s a meat-lover’s treasure. Some usual and delicious suspects of Kashmiri cuisine include Rista (Kashmiri Lamb Meatballs with Saffron), Gushtaba (similar to Rista but cooked in a yogurt-based gravy, i.e., Yakhni), Tabak Maaz (a lip-smacking snack of Kashmiri Fried Lamb Ribs), and Wazwan (a multi-course meal with 8 or 16 or 20 dishes almost all of which are meat-based using lamb or chicken – usually considered as a point of pride and art in Kashmiri culture).  Wazwan is usually served during weddings and in Trammi or taraem (a thali-like copper plate). A true Wazwan lover on hearing Wazwan would say, “Aab ounthe mei, bathe taraem wathiha” (You made my mouth water. Wish someone could send me a Taraem).

Nargis Fakhri looked stunning in the movie Rockstar (2011)in the clothes designed by GM Shah, didn’t she? GM Shah is one of the legendary spots to purchase handicrafts in shawls, sarees, embroidery suits, and crewel items in Kashmir.

This is a family owned and managed small business where you can find enticing essential oils made from natural walnut and lavender. It also has handmade soaps such as Royal Saffron, Almond Honey. Saklains also has authentic Kashmiri teas.

Yet another place to shop in Polo View – not that I have a bias for Polo View over Lal Chowk. Kashmir is world famous for its dry fruits. ABK is one of the best places to buy local farm produce. Saffron, Walnuts, Smoked Almonds, Dried Cranberries, Mushrooms, Dates, Prunes, etc. – you shall get it all. Also, do not forget to have the Masala Tikki (a local savoury meat dish) on a visit to ABK.

If you are into luxury, look no further. Andraab has Kashmiri scarves made from the rarest and finest cashmere. Their woven and hand-embroidered pashmina has loyal clients like Richard Gere and Judi Dench. Forget bargaining.

I am not sure whether this centuries-old curiosity shop in Srinagar Old City is now extinct or not. Ask the locals. It’s hidden (or perhaps not there at all?) on Google Maps. Arq-e-Gulab is the house of manually distilled rosewater. As natural the rosewater can get, the shop’s proprietor Aziz Ahmad Kozgar is the last of a long line of apothecaries that are believed to have arrived in the Kashmir Valley from Turkey around 500 years ago. Once so prosperous that the business used to import glass jars from France and England to store rosewater in them, today the aroma of ‘natural rosewater’ is dying in Kashmir. Or is it already dead?

So, Waliv (welcome) to Kashmir!