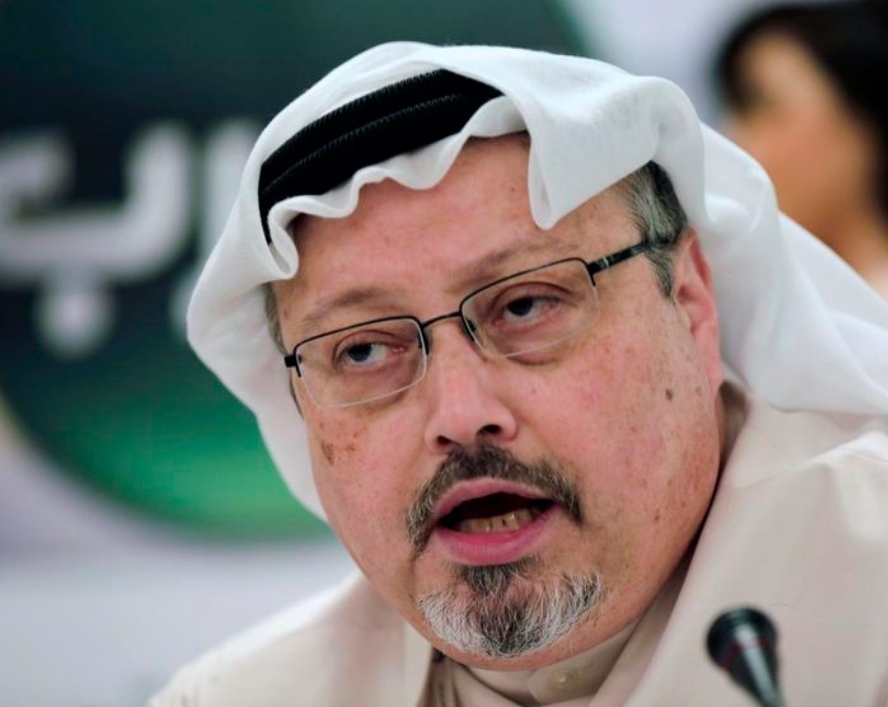 According to respected Canadian newspaper `The Star’,  a team of mercenaries known as Tiger Squad — a group allegedly sent by Crown Prince Mohammed bin Salman just days after the brutal death of prominent Saudi dissident Jamal Khashoggi in Turkey – were sent to Canada to assassinate Aljabri.

The Saudi men arrived at Toronto’s Pearson International Airport on a fall day. Among them were DNA forensic experts, a senior military officer, and a member of Saudi Arabia’s ministry of foreign affairs.

Holding tourist visas, they approached different customs kiosks. When questioned by border officers, they said they were not together.

Their alleged target? Saad Aljabri, a former top Saudi intelligence official who had sought exile in Toronto. They had tracked him to Canada using malware on his phone. They were here to execute him.

This is the extraordinary scene from 2018, seemingly out of a Hollywood spy thriller, that is painted in the allegations of a 100-plus-page lawsuit filed Thursday by Aljabri’s lawyers at U.S. District Court in Washington, D.C. None of the allegations have been proven in court.

Even though the alleged murder plot was thwarted after the team members failed to get past suspicious border officers, Aljabri’s life remains today in “dire peril,” the lawsuit asserts.

Aljabri, a permanent resident of Canada, believes two of his children, who were detained in Saudi Arabia earlier this year and whose whereabouts are not known, are now being used as “human bait” to lure him out of hiding.

He is seeking unspecified damages from bin Salman and his associates for allegedly orchestrating an “attempted extrajudicial killing” and for violating international law.

“One cannot really determine if the allegations are true based on the court filing and secondary reporting,” said Rex Brynen, a McGill University political science professor specializing in Middle East politics.

“However, this is entirely consistent with how Saudi intelligence operatives have acted in the case of other dissidents.”

Public Safety Minister Bill Blair said in a statement through his office that while he couldn’t discuss matters before the courts, “We are aware of incidents in which foreign actors have attempted to monitor, intimidate or threaten Canadians and those living in Canada.”

“Canadians can be confident that our security agencies have the skills and resources necessary to detect, investigate and respond to such threats.”

The lawsuit alleges Aljabri was targeted because of his close ties with the U.S. intelligence community, “intimate” knowledge of bin Salman’s activities and potential to undermine bin Salman’s influence and support from the Trump White House.

“Few places hold more sensitive, humiliating, and damning information about Defendant bin Salman than the mind and memory of Dr. Saad,” the lawsuit states, noting that Aljabri has made recordings “in anticipation of his killing.”

It goes on to say, “That combination of deep knowledge and enduring trust by top U.S. officials is why there is virtually no one Defendant bin Salman wants dead more than Dr. Saad.”

The targeting of Aljabri, the lawsuit alleges, is part of a broad campaign by the crown prince to silence dissidents — a campaign that included the murder of Khashoggi, a Washington Post columnist, in the kingdom’s consulate in Istanbul. The crown prince has denied he ordered that killing.

The new lawsuit comes at a time of messy relations between Canada and Saudi Arabia, a key player in the Arab world and major oil exporter. Earlier this year, Ottawa announced it would resume military exports to Saudi Arabia after putting a freeze on new permits in 2018 over human rights concerns.

A spokeswoman for Global Affairs Canada declined Thursday to discuss how the legal case might affect Canada-Saudi relations.

During his decades-long career with the Saudi government, Aljabri developed a close relationship with U.S. intelligence officials on counterterrorism files and was credited with helping to thwart a bomb attack in the U.S. by an al-Qaida affiliate, according to the court filing.

Aljabri was also an aide to Mohammed bin Nayef, who was a rival to bin Salman in a bid for the throne. After receiving intelligence that his life might be in danger, Aljabri fled the kingdom in May 2017, first to Turkey, then to Canada, according to the lawsuit.

In June 2017, bin Salman ousted bin Nayef in a palace coup and became the de-facto ruler. In the ensuing months, bin Salman allegedly tried to pressure Aljabri into returning to Saudi Arabia in a series of WhatsApp messages — threatening to use “all available means” to find him and telling him, “We shall certainly reach you.”

According to the lawsuit, bin Salman deployed a “network of covert agents” in the U.S. to try to track down Aljabri. Aljabri owns property in Washington, D.C., and other parts of the U.S. and had an affiliation with the Harvard Kennedy School in Massachusetts.

It is also alleged that bin Salman went so far as to arrange the arrest of Aljabri through Interpol, the international police agency, accusing Aljabri of corruption. (The New York Times has since reported that Interpol removed Aljabri’s name from its system because of concerns that the Saudi request was politically motivated).

According to the lawsuit, FBI agents warned Aljabri’s son in early 2018 that there were credible threats against the family. Then in October 2018, a couple of weeks after the murder of Khashoggi, a group of Saudi nationals traveled to Toronto “with the intention of killing (Aljabri).”

While the lawsuit alleges the composition of the team was different from the one that killed Khashoggi, it was similar in that it consisted of people drawn from across Saudi government “including forensic DNA experts from the General Department of Criminal Evidence in the Ministry of Interior, a senior military intelligence officer with the Ministry of Defense, and a diplomatic officer in the Ministry of Foreign Affairs.

“They were united only in their loyalty to Defendant bin Salman and their readiness to carry out his personal vendettas, including through torture and murder.”

“Carrying two bags of forensic tools, and complete with forensic personnel experienced with the cleanup of crime scenes — including an instructor in the exact same criminal evidence department as the forensic specialist who dismembered Khashoggi with a bone saw — the Tiger Squad Defendants attempted to enter Canada covertly, traveling on tourist visas and seeking to avert the detection of Canadian border security by entering through separate kiosks,” the court document states.

But the group didn’t make it far.

It is alleged that when Canadian border security officers asked them if they knew each other, they lied and said they did not. During a secondary screening, Canadian officials “found a photo of some of the Tiger Squad Defendants together, revealing their lie and thwarting their mission.”

Everyone was denied entry into Canada, except for one member who had a diplomatic passport, the lawsuit says.

The court document does not make clear how Aljabri came to learn of the interception. A source connected to Aljabri told the Star on Thursday an official with a Canadian security service provided the information and that it was corroborated by a U.S. security official.

Aljabri continues to believe his life is in danger and fears that bin Salman wants to send agents from the U.S. into Canada by land to “complete the job.”

In March, dozens of armed men stormed the Aljabri family home in the Saudi capital, Riyadh, abducted two of Aljabri’s children — Omar and Sarah, both in their early 20s — and took them to an unknown location, according to the lawsuit. Other relatives have also been detained.

Aljabri believes the family members are being used as a “crude form of human bait in an effort to lure (him) to Saudi Arabia so that he can be killed.”

The lawyers representing Aljabri in his lawsuit declined to comment Thursday. One of them is David Pressman, a former ambassador who represented the United States on the United Nations Security Council and a former assistant secretary of Homeland Security.

Toby Jones, a history professor at Rutgers University in New Jersey specializing in the Middle East, said, “It is entirely believable that bin Salman would seek to murder those he sees as dangerous to him.”

“This kind of violence has a long political history in Saudi Arabia. Leaders there have allegedly been involved in the kidnapping or assassination of critics and dissidents from Beirut to London to Istanbul since the 1970s. And has long been the case, the Saudis enjoy almost complete impunity,” he said.

“Their powerful backers, particularly the kingdom’s most important advocate, the United States, see little value in pressuring for change or in demanding accountability. Saudi oil and money long ago bought American and Western silence, and, their willingness to look away.”

Last month, four U.S. senators wrote a letter to President Donald Trump to express their concern for the “enforced disappearance” of the two children of Aljabri, whom they described as a “close ally and friend.”

They wrote that the U.S. had a “moral obligation” to help the family.

In a recent article in Foreign Policy magazine, journalist Ola Salem wrote the methods in the Aljabri case appear to be a “recurring tactic” used by Arab regimes against growing numbers of dissidents abroad.

“Families are asked to pressure the dissenting relative into silence, disown them, discredit them, and denounce their actions. Families that fail to comply face travel bans, social isolation, job loss, and even incarceration.”

In June, the Guardian newspaper reported that another Saudi dissident and video blogger living in exile in Canada, Omar Abdul-Aziz, had recently been warned by the RCMP that he might be a potential target of Saudi Arabia.