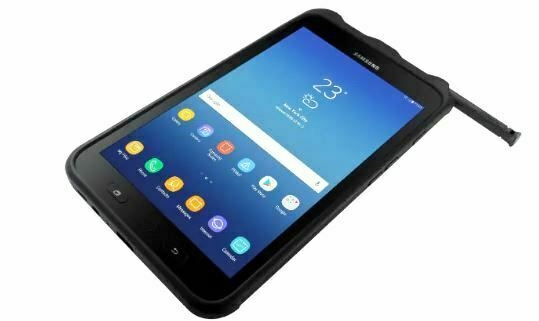 The Samsung Galaxy Tab Active 2 price in India has been set at Rs. 50,990. The tablet will go on sale in the country starting mid-March.

To recall, the Samsung Galaxy Active 2 was originally unveiled for the Netherlands market back in October 2017. The tablet carried a price tag of EUR 500 (roughly Rs. 40,000) in the country.

To make the Galaxy Tab Active 2 ready for industry use, Samsung has offered a build that is MIL-STD-840G certified. The design of the tablet is touted to protect against vibrations, accidental shocks, drops, rain, and dust. Also, the tablet is IP68 certified, which makes it capable of remaining 1.5-metre underwater for 30 minutes. It is also claimed to withstand extreme temperatures (storage minus 40-degree Celsius and operating minus 20-degree Celsius to 71-degree Celsius).

Samsung has provided its Knox 3.2 platform integration that is touted to protect the system from hackers and cybercriminals. There is also a Knox Configure to enable a large range of configuration options in wallpapers and boot screens among others. Further, the tablet has a facial recognition feature to let users unlock the screen by looking at the front-facing camera sensor and comes with an S Pen integration.

Similar to other rugged tablets, the Samsung Galaxy Tab Active 2 also has an Enhanced Touch option that enables the display to work even under rain or during a snowfall. There is also a Glove Mode to let users use the display even while wearing gloves. Additionally, the tablet has augmented reality (AR) capabilities.

Samsung claims that unlike the non-rugged tablets that generally last just one year in tough work environments, the Galaxy Tab Active 2 has a product lifecycle of more than three years. The tablet is specifically targeted at sectors such as mining and refinery, manufacturing, and construction. IT managers can also manage file timecards and daily reports from the field, or edit plans and drawings on the spot.

There is an anti-shock cover that helps the tablet withstand accidental drops and shocks. Further, there is a pogo pin connector that could be used to connect and charge multiple devices at once or easily attach a notebook or keyboard.

In terms of the specifications, the single-SIM (nano) Samsung Galaxy Tab Active 2 runs Android 8.1 Oreo and features an 8-inch WXGA (1280×800 pixels) TFT display along with a Gorilla Glass 3 panel. The tablet is powered by an octa-core Exynos SoC, paired with 3GB of RAM. For storing content, it has 16GB of internal storage along with microSD card support (up to 256GB).

The Galaxy Tab Active has an 8-megapixel rear camera and a 5-megapixel front camera. Among the connectivity options, there are options such as 4G LTE, Bluetooth v4.2, Wi-Fi 802.11 a/b/g/n/ac, NFC, pogo pin connector, and a USB Type-C port. On-board sensors include an accelerometer, ambient light, fingerprint, geomagnetic, gyroscope, and a proximity sensor. Besides, the tablet packs a 4,450mAh battery that is user replaceable.

“Armed with innovative capabilities, our devices are robust, dependable and purpose-built to fit their specific needs of on-site operations,” said Sukesh Jain, Senior Vice President, IT and Mobile Enterprise Business, Samsung India, in a statement. “The product will suit the demands of field professionals across sectors like defence, law enforcement, transportation, e-commerce, logistics, manufacturing, and many others by allowing the field managers to oversee the operations digitally.”