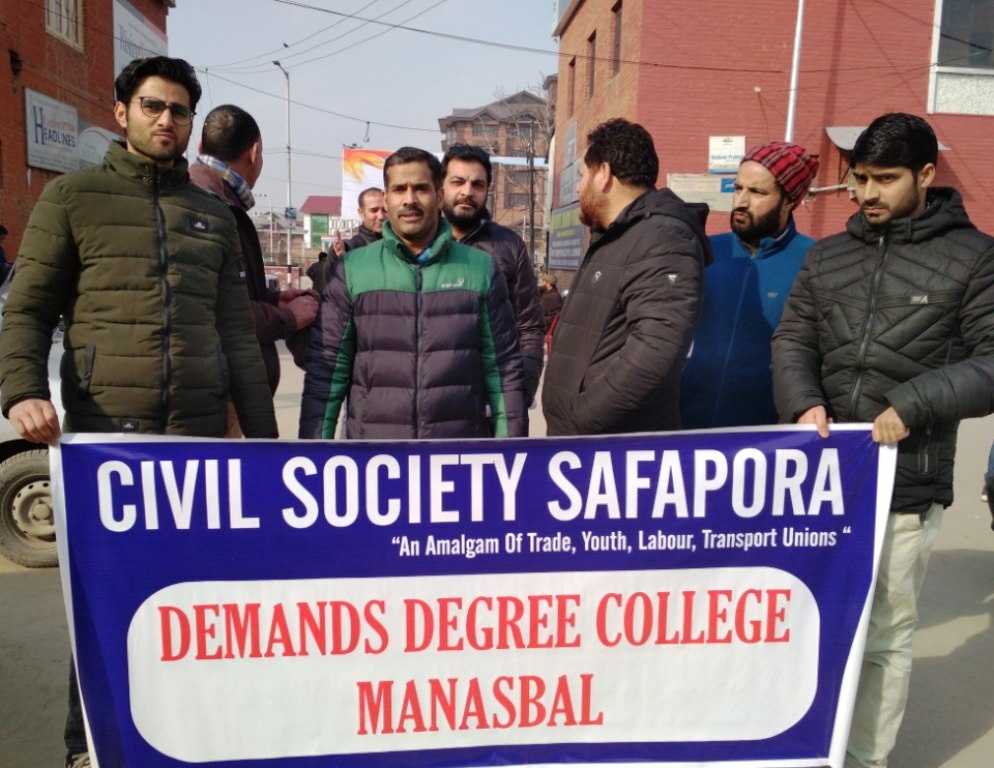 Srinagar, Jan 29: The members of civil society Safapora Manasbal in district Ganderbal on Tuesday held a protest demonstration to press the government over their demand of establishment of Degree College in the area.

The Civil Society Safapora comprising representatives of student bodies, Transporters, Traders and Labours federation led by their president, Suhail Nabi Khan assembled at Press colony Srinagar and raised slogans in favour of their demand.“We demand establishment of degree college at Safapora for which recommendations from deputy commissioner Ganderbal under letter no DCG/ESTT/286/2018 and endorsed by Divisional Commissioner Kashmir were submitted to the committee constituted by SAC for establishment of degree colleges in J&K but the authorities have ignored the area while recently sanctioning degree colleges in other parts of the state,” said the president of civil society Safapora, Suhail Khan.

He said that recently the government of Jammu and Kashmir announced 40 colleges in Kashmir but Ganderbal district was completely ignored despite being densely populated and in dire need of a college.

One of the local said, “Our area stands feasible for all the parameters required for establishment of a college like land availability, catchment area and merit of students but we are shocked on what grounds Safapora has been dropped from the list.”

“The Committee has succumbed to its political pressures and murdered the merit throwing our youth to extreme conditions but we want an end to such exploitation,” he added.

The residents sought the intervention of higher authorities in the issue and appealed the governor administration to sanction a degree college in Safapora area of district Ganderbal.