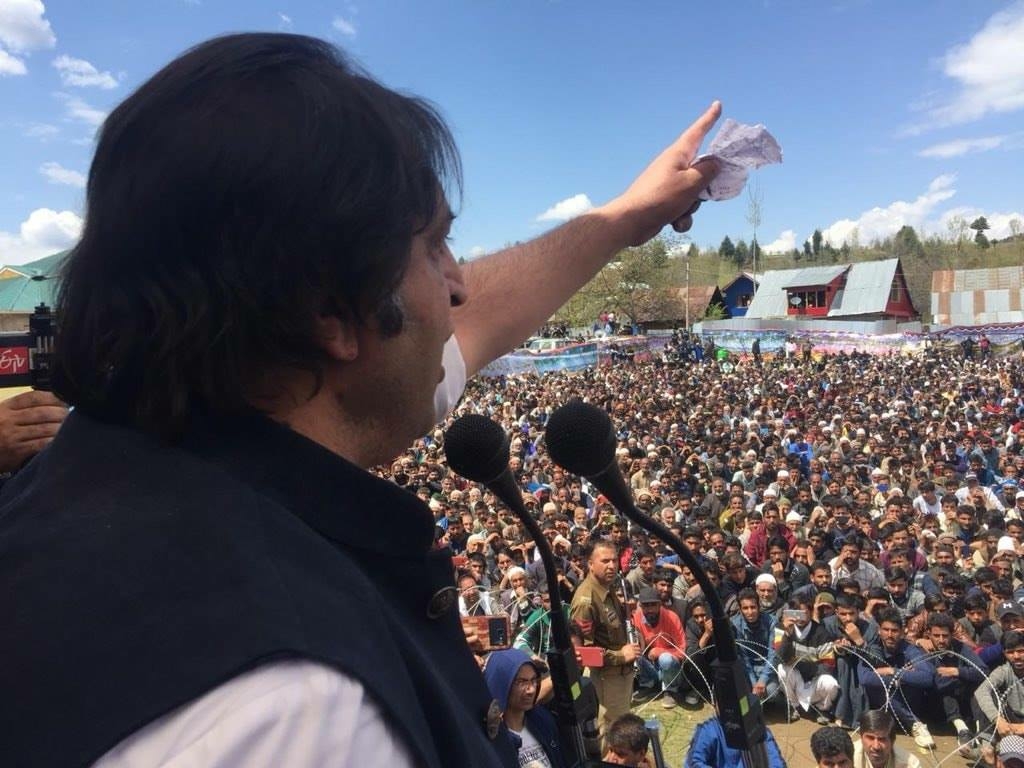 Srinagar, Apr 8: Peoples Conference chairman Sajad Gani Lone on Monday asked National Conference vice-president Omar Abdullah to reveal which national party president did he meet after 2014 polls to seek support for becoming Chief Minister.
Addressing thousands of people in Kralpora, Kupwara and Hangah, Langate, Sajad asked Omar Abdullah to disclose with which national party president was he closeted with for two hours and begged for his support to become Chief Minister.
“Omar Abdullah met President of a national party in a high-rise building at Connaught place, New Delhi after 2014 elections to seek support for becoming Chief Minister. If Omar Abdullah has guts, he should reveal the details of his secret meeting. If he does not answer my question, we will make the answer public during the public rally at Handwara tomorrow,” he said.
Sajad said Omar Abdullah was the first person from Kashmir to be a part of the BJP government at the Centre in 1999.
“His only job at the height of human rights violations in 1999 was to travel across the globe and present the Indian point of view to the world community. So while people were being killed in Kashmir, Omar Abdullah was defending the killers across the world capitals,” he said.
Sajad asked will Omar Abdullah tell the people of Kashmir how BJP/RSS/NDA promised nominating his father as their candidate for the post of Vice President of India.
“The BJP reneged on their promise and instead nominated Bhairon Singh Shekhawat for the post. You were in competition with the Mr. Shekhawat, the senior most espouser of Sangh ideology and you guys lost narrowly. That is the best indicator of your high score on the Sangh Index,” he said.
“Has Omar Abdullah also forgotten that he expelled Saifudin Soz from NC for committing the cardinal sin of voting against the BJP in a vote of no confidence brought against them in the parliament in 1999”.
Sajad said why did Omar Abdullah not make any efforts to prevent attacks on Kashmiris in Rajasthan where his close relative is deputy chief minister.
“Omar Abdullah has close relatives cutting across party lines and religions. They apparently wield a lot of influence in a particular national party. It might be a good idea to utilize their influence in reversing the erosions which this national party resorted to,” he said
Sajad said his party was chased out of mainstream by National Conference in 1987 by blatantly rigging the polls.
“We are an old party which was mainstream to start off and were chased out of the mainstream by blatant rigging resorted to by your father in 1987,” he said.
He said neither they have a CBI charge sheet like Farooq Abdullah neither do they have amassed wealth in thousands of crores.
“Three generations of Abdullahs have held no proper job, own no known business but have amassed wealth of thousands, starkly disproportionate to their known sources of income, “he said.
“Maybe the JKCA can be a pointer to how this wealth was accumulated over generations bartering the aspirations of the common people and walking over one lakh dead bodies,” he said, adding that they have no baggage of killings and imprisoning people like Abdullahs.
“We have no blood on our hands, we have not imprisoned thousands under PSA. We are not a party to any erosion of the special status of the state. We are not a party to hanging of two Kashmiris.”
He said Omar Abdullah has the  audacity to label everyone opposing them as agent of New Delhi.
“Sheikh Sahib was a chief minister without even a single MLA. If that was a miracle. A greater miracle was his audacity of labelling everyone as an agent of Delhi despite being a chief minister because of Delhi. The disease seems to have been carried on. Omar Abdullah the most unambiguous creation of Delhi sees Delhi in anybody who dares question him, “he said.
He said Abdullah’s are at the root of all ills in Kashmir and that every death and destruction can be traced back in the Valley to the NC.
“Be it the 47 erosions to Art 370, meddling or the change of nomenclature for Head of state everything lays at the Abdullah doorstep,” he said
He also reiterated his stance on Art. 370 and 35A terming then as sacred and that the only “space for movement in his regard is the reversal of erosions”.
He went on to add “any other reckless thought or comment seeking removal is a disaster”