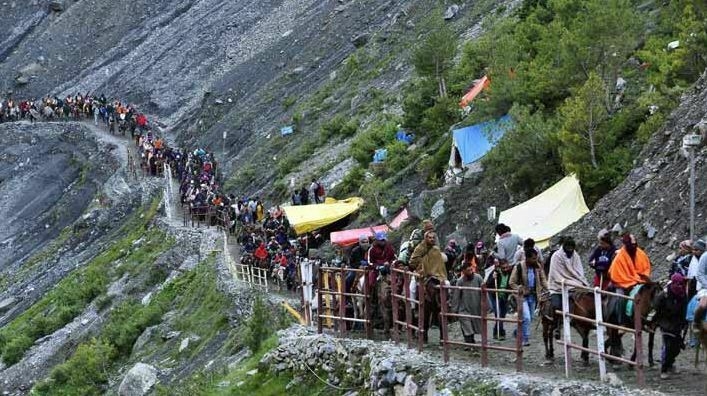 SRINAGAR, JUNE 26:  Governor N.N. Vohra, Chairman of Amarnath Shrine Board, while reviewing the ongoing Advance Registration of Yatris for Shri Amarnathji Yatra 2017 with Shri Umang Narula, Chief Executive Officer, and Shri Bhupinder Kumar, Additional Chief Executive Officer, was informed that , as of now, 2,11,994 pilgrims had  secured Advance Registration through the designated Bank branches, Group Registration Facility and through booking of helicopter tickets for the  Yatra.
This registration is being provided to the Yatris since Ist   March, 2018 through 440 designated bank branches of the Punjab National Bank, J&K Bank and YES Bank, located in 32 States and UTs across the country. The ongoing trend of registration shows that about 1200 persons are being registered every day and the maximum numbers are being registered from the States of Uttar Pradesh, Maharashtra, Punjab, M.P., Gujarat, Delhi, Rajasthan and Haryana. It was also noted that the Advance Registration via the traditional Pahalgam route, preferred over the Baltal route; this trend  conforms to the traditional pattern of the Yatra. 225 groups have so far utilized the Group Registration Facility which is being especially provided by the Shrine Board.
CEO reported that with the reduced helicopter ticket fare for Yatra 2017 and Yatra 2018, as compared to the rates in the previous years, pilgrims in larger numbers have booked tickets in advance of the Yatra. The per passenger one way Neelgrath – Panjtarni heli-fare for Yatra 2018 is Rs. 1,600/- (inclusive of all taxes) and Rs. 2,751/- (inclusive of all taxes) for Pahalgam-Panjtarni.
CEO has yet once again urged Yatris to secure their Advance Registration for Shri Amarnathji Yatra 2018 only from the branches of the authorized Banks and not from any other persons or agents who may try to cheat and sell fake Yatra Permits to them.  The list of all authorized bank branches for providing advance registration for Yatra 2018, alongwith the authorized Doctors/Medical Institutions competent to issue Compulsory Health Certificates, is available on the website of Shrine Board at http://www.shriamarnathjishrine.com.