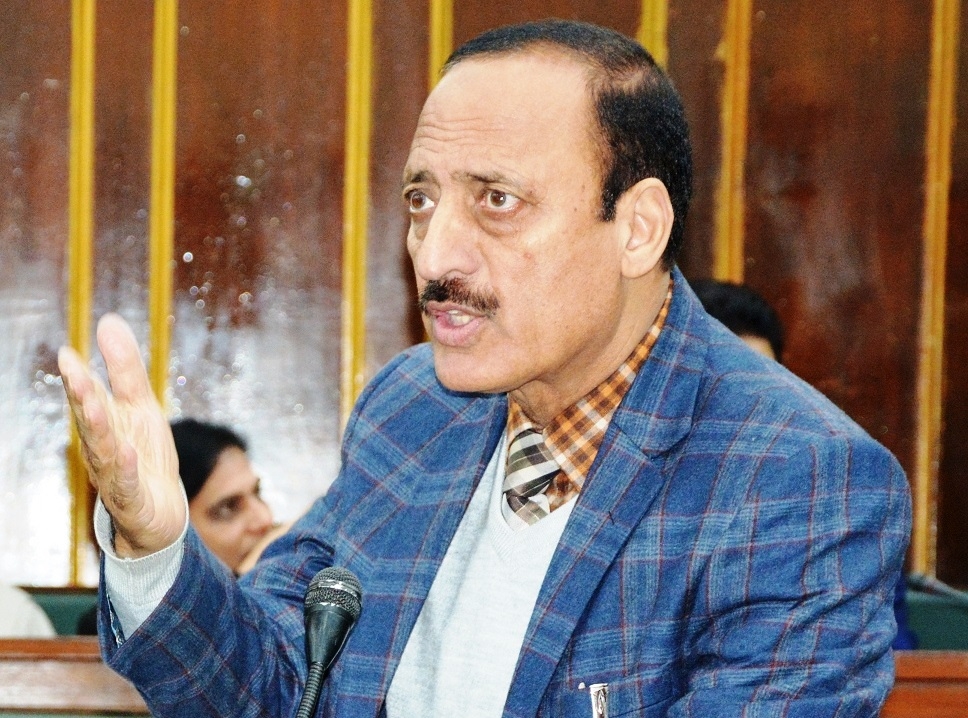 JAMMU, JAN 23: Minister for Rural Development, Panchayati Raj, Law and Justice Abdul Haq Khan said that various programmes and schemes launched by the government aimed for holistic development of rural areas of the state. He said the effective implementation of RDD schemes has changed the lives of people by reshaping the rural economy.
The Minister was replying to the discussion on working of Rural Development Department in the Legislative Council, here today.
With a view to enlighten the House, the Minister highlighted various achievements made by the department during the past three years and also outlined the future strategy to bring era of development in the rural areas of the state.
He said the department has laid a network of roads, bridges and culverts in the state under MGNREGA that has changed the socio-economic status of the rural populace.
“In a first, RDD has done some commendable job after launching MGNREGA scheme in the State, which has been acknowledged at national level and has also won many awards in last three years,” he said.
Under MGNREGA, the department has set short terms missions with an aim to create durable assets for the people of rural areas, while jobs are created during the last three years, he added.
He said that it has identified the rural connectivity a major challenge in rural areas and hence took up the task to focus on rural connectivity in first two years and has constructed 679 bridges, 2283 culverts, 31337 roads during the period.
The Minister further informed that the department has also constructed 2696 ponds, 885 check dams , 3617 water harvesting tanks , 561 play fields, 72 fisheries ponds, 55 Anganwari centers, renovation of 4622 traditional water bodies and 20143 micro irrigation works while providing jobs to 23.90 lac persons.
“Our main focus is on water harvesting in kandi areas including construction of water harvesting tanks, check dams and other small dams in upper belts to conserve the water,” he added.
He said that after introduction of technology to monitor the assets, all the assets in the districts have been geo-tagged and it is a touchstone of transparency that will enforce better monitoring, recording and management of development works at the cutting edge level.
He further informed that one ombudsman will be shortly engaged for two districts in the state to look into complaints to bring transparency and accountability in the system.
It was a breakthrough for the department in the implementation of the Mahatma Gandhi National Rural Employment Guarantee Scheme (MGNREGS) in the State by adopting e-FMS in which system allows direct transfer of fund from State Account to Job card holder’s Account, reducing human intervention and delays in wage payment, he said.
To boost self-esteem and self-confidence of women folk especially living in rural areas, the Minister informed that biggest success of UMEED scheme in the state is that currently 2.08 lakh women are associated with the 22270 Self Helf Groups formed under the scheme in 68 blocks of the state.
He further stated that JKSRLM has also been entrusted with the responsibility of training and placing over 1.24 lakh JK youth with an allocation of Rs 1,601.51 crore for a period of three years under Himayat Scheme.