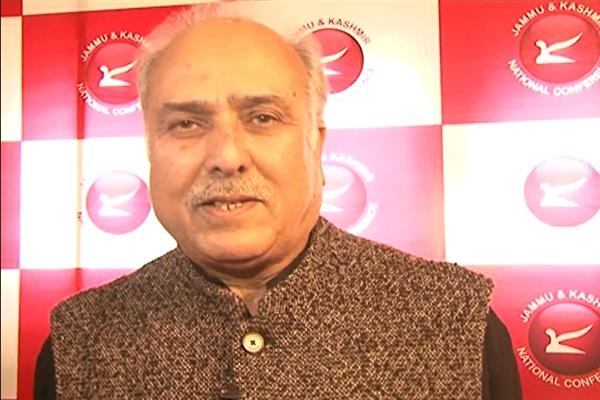 Srinagar, April 04: Justice (Retd) Hasnain Masoodi, NC candidate for Anantnag Parliamentary Constituency has strongly refuted the Home Minister’s statement that Article 370 and 35-A will go in case of separate Prime Minister for Jammu and Kashmir.

Hasnain Masoodi has stated that not only the Articles 370, 35-A have nothing to do with the Sadar-i-Riyasat (President) and Wazir-e-Azam (Prime Minister) but both the Articles visualize two positions that are symbols of Jammu and Kashmir’s sovereignty.

Justice Masoodi has pointed out that after accession was conditionally accepted subject to referendum and Article 370 came into force both Sadar-i-Riyasat (President) and Wazir-e-Azam (Prime Minister) remained in place and co-existed with Articles 370 and 35-A for little less than two decades; that after unwarranted and undemocratic dismissal and arrest of Sher-i-Kashmir Sheikh Mohammad Abdullah the first Prime Minister of Jammu and Kashmir in 1953, the positions were replaced by Governor and Chief Minister by the 6th constitutional amendment of 1966 to the J&K Constitution and not by any Presidential order.

Refuting the assertion that restoration of Sadar-i-Riyasat (President) and Wazir-e-Azam (Prime Minister) would end Articles 370 and 35-A, Justice Masoodi has maintained that the two position being provided under the Jammu and Kashmir Constitution and guaranteed by the pledges made to the people of Jammu and Kashmir, more particularly by Delhi Agreement in 1952, are in tune with the sovereignty enjoyed by the State under the Agreement and the Constitution. Justice Masoodi was addressing NC workers of Anantnag Assembly segment and youth wing of the party.