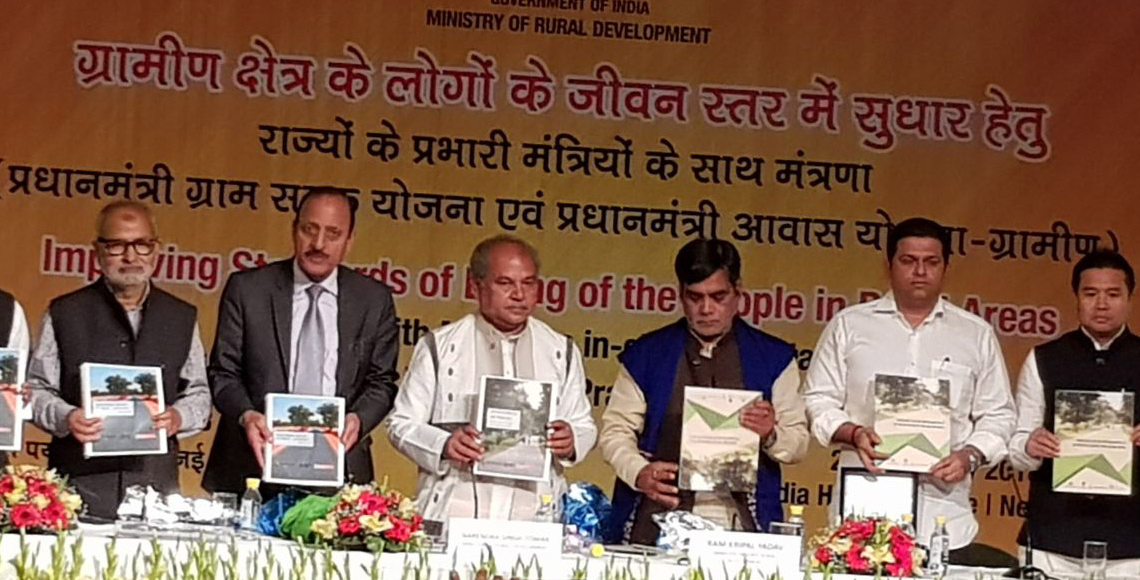 NEW DELHI, FEB 28: Minister for Public Works Naeem Akhtar and Minister for Rural Development Panchayati Raj, Law and Justice, Abdul Haq Khan attended a meeting convened here Wednesday by the Union Minister for Rural Development, Panchayati Raj and Mines, Narendra Singh Tomar to discuss implementation of Prime Minister’s Awas Yojana (PMAY) and Prime Minister’s Gram Sadak Yojana (PMGSY).
The meeting was attended by various state Rural Development Ministers and officers.
The Union Minister said under the guidance of Prime Minister, Ministry of Rural Development is determined to improve standards of living of the people in rural areas through various schemes.
He said the Ministry has brought important changes in implementation of its programmes and has also ensured that the states are provided adequate resources to augment infrastructure.
Union Minister said the Budget of Rural Development Department which was Rs 58,630 Crore in 2013-14 has been increased to Rs 1,09,042 Crore in 2017-18 which depicts government’s commitment to uplift the rural areas at par with the urban areas.
The Minister said under PMGSY the government is providing rural connectivity connecting habitations besides Mandis, Towns, Hospitals and other amenities.
He said the Government has advanced target of connecting all eligible habitations with pucca road from March, 2022 to March, 2019 under PMGSY. He urged the States to complete the road projects in time to avail the Central funds and incentives as budget is no constraint for PMGSY.
Minister for Public Works Naeem Akhtar informed the meeting that a network of roads is being laid in rural areas to increase the connectivity and assured that the centrally sponsored schemes will be implemented in letter and spirit.
He said the roads in villages will set the villages on the track of development as more jobs will be created and business will flourish after the connectivity is increased.
The minister informed that upto Phase X of PMGSY, 2410 roads and 108 bridges have been constructed at the sanctioned cost of Rs 8132.38 crore out of which Rs 4085.92 crore have been spent up to January this year and has connected as many as 2035 habitations.
Union Minister was informed that before the inception of PMGSY in J&K the rural connectivity in the state was 58 percent which has been now increased to 86.13 percent.
Under PMAY, Tomar said the government intends to provide Housing for All by 2022 and said the government is determined to achieve the target within stipulated time by providing housing facilities to 1 core beneficiaries in rural areas by March, 2019.
The union Minister reviewed the functioning of these schemes including PMGSY and PMAY in the states and urged the respective ministers to expedite work on these projects so that not only the target can be achieved well in time but the common masses are benefitted at earliest.
Abdul Haq briefed the meeting about the achievement in the implementation of PMAY and assured full support from the state government with regard to the implementation of these schemes.
Minister said the state government is in process of holding Gram Sabha to prepare a fresh list of the house-less and economically backward population who were left out in the earlier surveys.
He said the department has already been instructed to hold fresh Gram Sabhas so that the left out deserving people can benefit identified and included in the list that will be sent to the union government for approval.
He said the JK Government has also directed the officials of Rural Development Department to finalize the list within 15 days after holding Gram Sabha and make the list public in the respective Panchayats by pasting the same list at Public places including outside the Offices of BDOs and Panchayat houses so that everybody is aware about the list and discrepancy or complaint, if any, can be communicated to the people thereby by ensuring transparency.
He said under the guidance of Prime Minister and Chief Minister at the centre the government is determined to improve standard of living of the people in rural areas through its various schemes