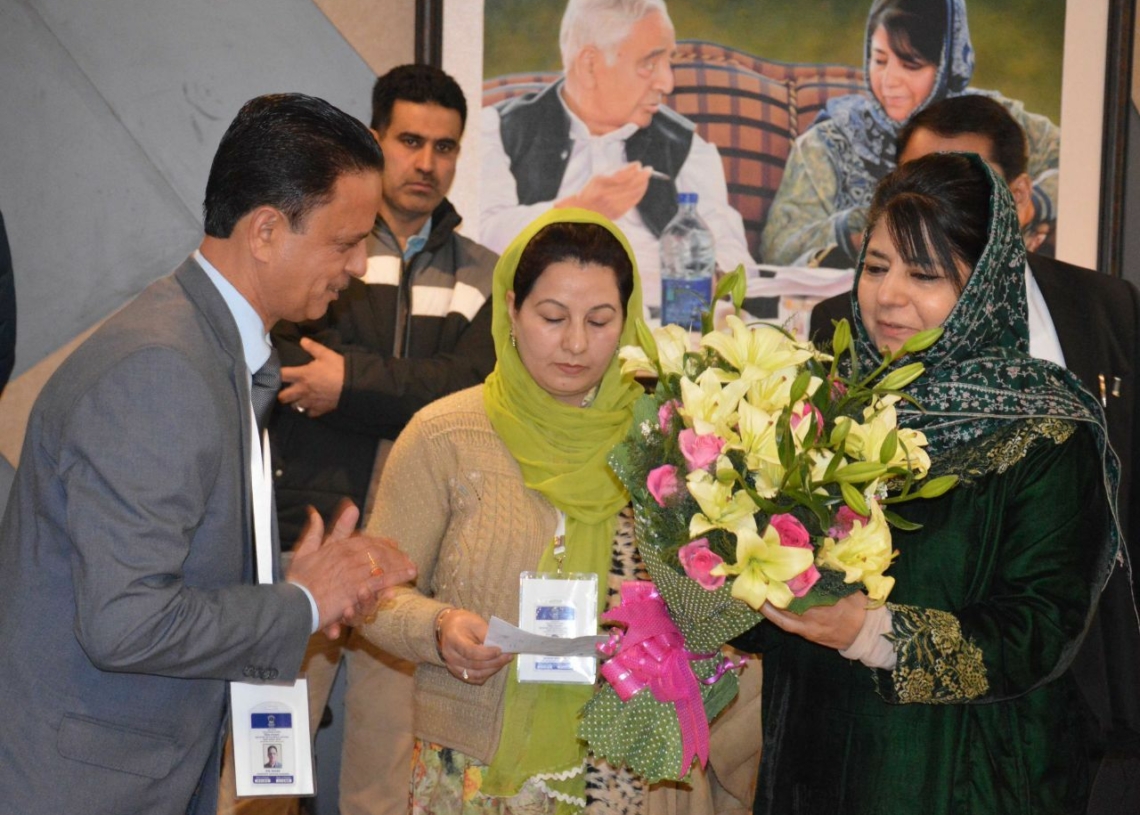 Srinagar, Feb 19: Chief Minister, Mehbooba Mufti today e inaugurated a Passport Seva Kendra for Anantnag here today.
The opening of this Kendra would help in pacing up the process of passport issuance and delivery by bringing the service closer to people’s doorstep benefitting some 20 lacs souls of South Kashmir districts. This would reduce the waiting time for the applicants by considerable measure.
The Chief Minister, on the occasion, complimented the people of Anantnag for the facility hoping it would cut the delays caused in the delivery of passports and process applications from far flung areas. She asked the Passport office authorities to prioritize issuance of passports in respect of students, Hajj pilgrims, infirm and other deserving people by speeding up the processes.
On the occasion, the Chief Minister was informed that Anantnag is among the 144 locations across the country where this facility is being introduced. In Jammu & Kashmir such kendras would be set up also at Baramulla, Kathua and Udhampur.
Chief Post Master General, Sanjay Sharavan; Divisional Commissioner, Kashmir, Baseer Ahmad Khan; Inspector General of Police, Kashmir zone, S P Pani; Senior Superintendent of Posts, Rattan Lal; Additional Passport Officers, B B Nagar and Anil Suryavanshi; Deputy Commissioner, Srinagar, Dr. Syed Abid Rasheed; SSP, Srinagar, Imtiaz Ismail Parray and other officers were present on the occasion.
On this occasion Chief Minister greeted to the people of J&K. She already tweeted “Thankful to @SushmaSwaraj ji for launching Passport Seva Kendra’s in Anantnag, Kathua & Baramula. The issue was taken up with the MEA some time ago so residents in those districts don’t have to travel to Srinagar for passport services. @MEAIndia”
The Ministry of External Affairs (MEA) and the Department of Posts (DOP) have decided to set up Post Office Passport Seva Kendras (POPSKs) in the Head Post Offices (HPO) in the country. It is an example of “Minimum Government, Maximum Governance“ slogans of Shri. Narendra Modi, Prime Minister of India. The objective of this partnership is to extend passport related services on a larger scale and to ensure wider area coverage. In the first two phases 235 POPSK have been announced in the country. This is the 66th POPSK to have become functional since the launch of the 2nd phase of POPSK.
There will be 50 appointments released per day which will be scaled up further depending upon the utilization of the slots. The POPSK is expected to help the people of South Kashmir comprising of four district viz. Anantnag, Kulgam, Pulwama and Shopian and those in the near vicinity to apply for their passport without having to travel to Srinagar. It will save their considerable amount of time and money.
Those present at Anantnag include MLA, Kokernag, Abdul Rahim Rather; Vice President, PDP, Muhammad Sartaj Madni; Deputy Commissioner, Muhammad Younis; DIG, SKR, Amit Kumar; SSP, Altaf Ahmad Khan and other senior officers and a large number of people.