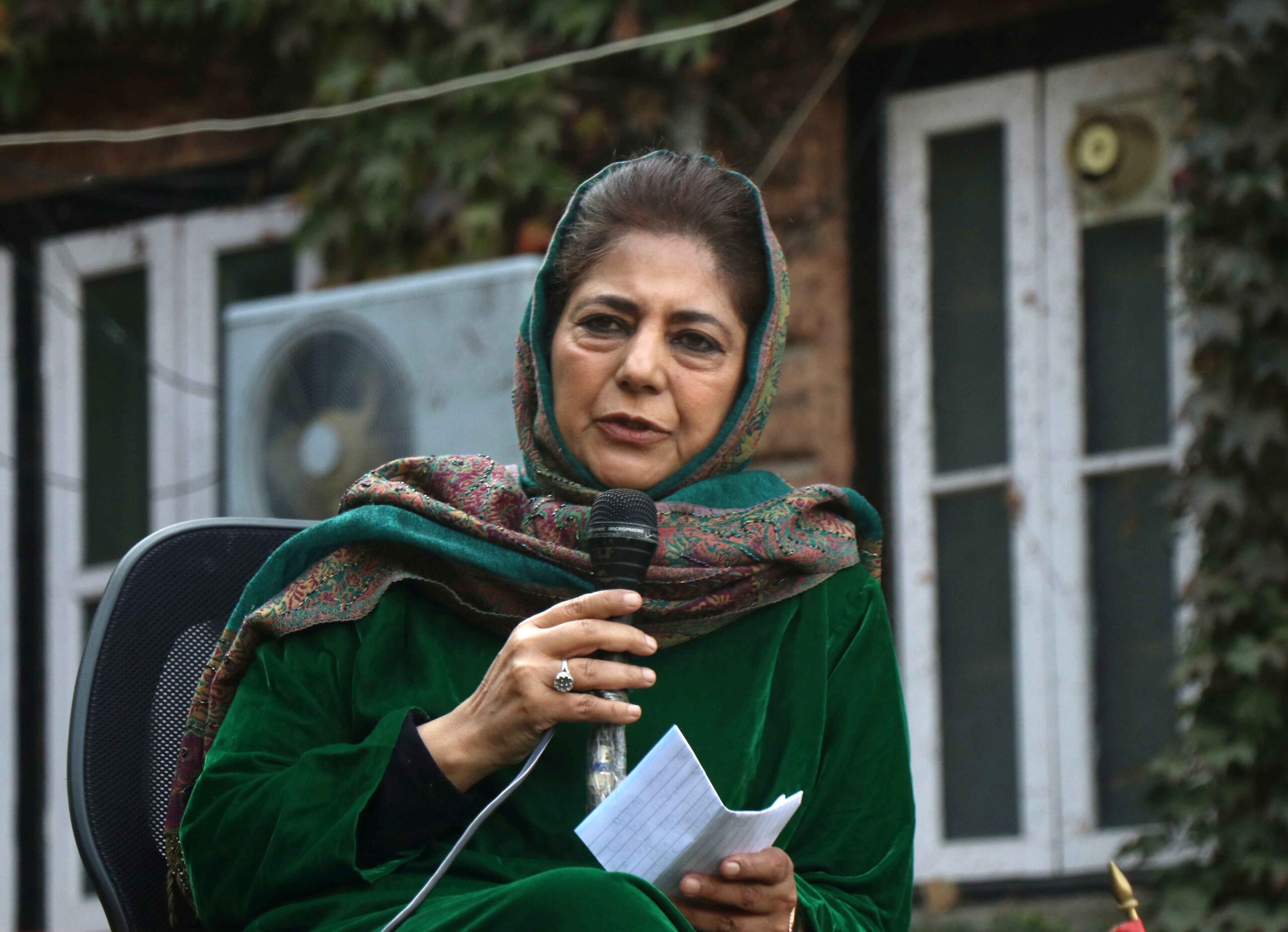 Srinagar: Hardening her stand against the centre’s decision to abrogate Article 370, Peoples Democratic Party (PDP) president Mehbooba Mufti on Friday said she will not hold the tricolor till the flag of the erstwhile J&K state was returned to the people.

Likening the stripping of J&K’s special status to a ‘theft’, she also said her party was not comfortable with ‘present India’ where the BJP was trying to ‘replace’ the Indian constitution with its manifesto.

“We had acceded to a liberal, democratic and secular India….Let me tell them that we are not comfortable….compatible with present India where minorities and Dalits are not safe. The country will run as per the constitution, not as per the manifesto of the BJP. They want to replace the constitution with the BJP manifesto. How can they expect the people of J&K to follow the constitution they themselves desecrated?” Mehbooba said while addressing a maiden press conference her release from a 14-month detention.

Pointing to the flag of the erstwhile J&K state flag that was placed alongside the PDP flag in front of her, she said: “Our flag is here in front of me. When this is returned, we will hold that flag (tricolor) too. As long our own flag is not returned, we will not hold any other flag….that flag’s (tricolor’s) relation has been built by this flag.”

“No matter how big or deadly the dacoit is,  he has to return the stolen item after a theft. The theft that happened on August 5, 2019 was not as per any law. They did not have the power to snatch Article 370 and 35-A. It is the Indian constitution that had given the power to the state constituent assembly whether to keep it or not…..They tried a lot to discredit us and spread rumors about us through fake TRP media but we stand by our resolve….we have seen Pharaoh and Hitler but this autocracy will not stay,” she added.

Batting for the resolution of Kashmir issue, Mehbooba said: “My struggle will not be confined to the restoration of Article 370. It will go beyond that. It will be for the resolution of the Kashmir problem…I want to tell Delhi durbar that Kashmir is an issue. Our party was formed to make J&K a bridge of peace between the SAARC (countries) and resolve the issues through dialogue. If they want that we should only talk about statehood, then they are misinformed. A lot of blood has been spilled and now it is the turn of leaders to give blood.”

She flayed the BJP for raking up Kashmir to conceal their shortcomings. “BJP passed the CAA and polarised the people through it and also made an anti-farmer law. Today, they have failed to resolve the issues as we have gone behind Bangladesh (on the global hunger index). They are flogging Kashmir and minorities including Dalits have been demonized. When they fail, they remember Kashmir and 370. They are sidelining Muslim officers (in administration) and people of J&K are expendable for them, and what they want is a territory,” she said.

When asked about the future course of action vis-a-vis abrogation of Article 370 and if the PDP would take part in any upcoming electoral process, she said the same would be jointly decided by the ‘People’s Alliance for Gupkar Declaration’. The front had been formed on October 15 by six major political parties of J&K.

“Streets are not new to me. I have been a street fighter. We will sit with the People’s Alliance and decide.  As far as I am concerned, I have no interest in elections till the (J&K’s) constitution is returned….they will come to our feet and say what else do you want (besides the return of J&K’s special status). It is a political fight,” she said.

Mehbooba asserted that her previous alliance with the BJP was not for power and differences had cropped up within the coalition on issues like the return of bodies of militants to their families and release of stone-pelters among others.

“We did not ally with the BJP for power. If you remember, my father (late Mufti Mohammad Sayeed) made a statement on July 28, 2014, that he wants to work for the people. By forming an alliance with the BJP, he tried to put a genie into the bottle. He knew that a tsunami is coming…We stood like a wall behind Article 370 but everything was done from the Parliament,” she said to a question if the PDP-BJP alliance was responsible for the abrogation of Article 370.

Mehbooba, however, said she regretted reposing faith in the BJP that ‘ripped apart’ the Indian constitution.

On Hurriyat leader Syed Ali Geelani’s shutting of the door to an all-party central delegation when she was at the helm, she said it had sent ‘wrong signals’ outside.