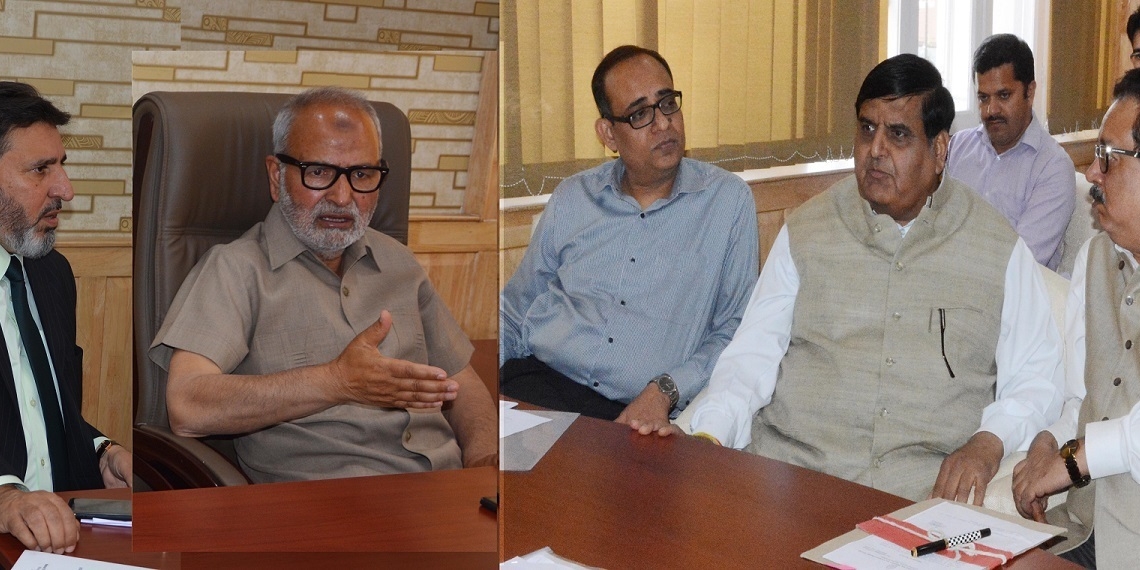 SRINAGAR, MAY 24: With an aim to open up economic opportunities in the state through better connectivity, Minister for Public Works and Culture, Naeem Akhtar, today reviewed the ‘Annual Developmental Plan’ of the Works Department for the current financial year at a high-level meeting in his office chamber here.
Minister for Finance, Labour & Employment, Syed Mohammad Altaf Bukhari, Minister of State for PWD, Shakti Raj Parihar, Chief Secretary, B B Vyas,Principal Secretary, Finance, Navin K Chaudhary, Principal Secretary Planning & Development, Rohit Kansal, Commissioner Secretary, Public Works Department, Sanjeev Verma, Director General, Planning and Development, Shahzada Bilal, Chief Engineer, R&B and other officers of the Finance and Public Works Department were present at the meeting.
“Last year, new records were set by Jammu and Kashmir in infrastructure development. Our hardworking engineers and workers macadamised record road length under different centrally sponsored schemes. This year, we must resolve to move a step ahead in fulfilling the developmental agenda of our government,” Akhtar said, adding that the new projects will flip the process of infrastructure development in the state.
The Works Minister said Jammu and Kashmir is undergoing a new era of progress and prosperity under the leadership of Chief Minister Mehbooba Mufti and the economic transformation taking place in the state will go a long way in addressing the development deficit faced by the state over the last three decades.
During the meeting, the Minister was apprised about various connectivity projects that will be taken up in Jammu and Kashmir by the Works Department, including macadamisation of old roads, construction of new roads and bridges, etc. during this financial year.
“Jammu and Kashmir will be taking up record number of new projects under various centrally sponsored schemes like Central Road Fund, Pradhan Mantri Gram SadakYojna, NABARD, etc which will transform the economic landscape of the state and open up new avenues of opportunities,” Akhtar said.
Under CRF, 67 new projects have been sanctioned by the Ministry of Road, Transport and Highways for Jammu and Kashmir for the current financial year. Similarly, under NABARD, 128 new projects, including 11 bridges, have been sanctioned for the state.
During the meeting, the issue of unpaid claims of contractors was also discussed in detail and it was agreed that the Planning and Finance departments shall work out a substantial amount to be provided to the Works department to take care of any liabilities.