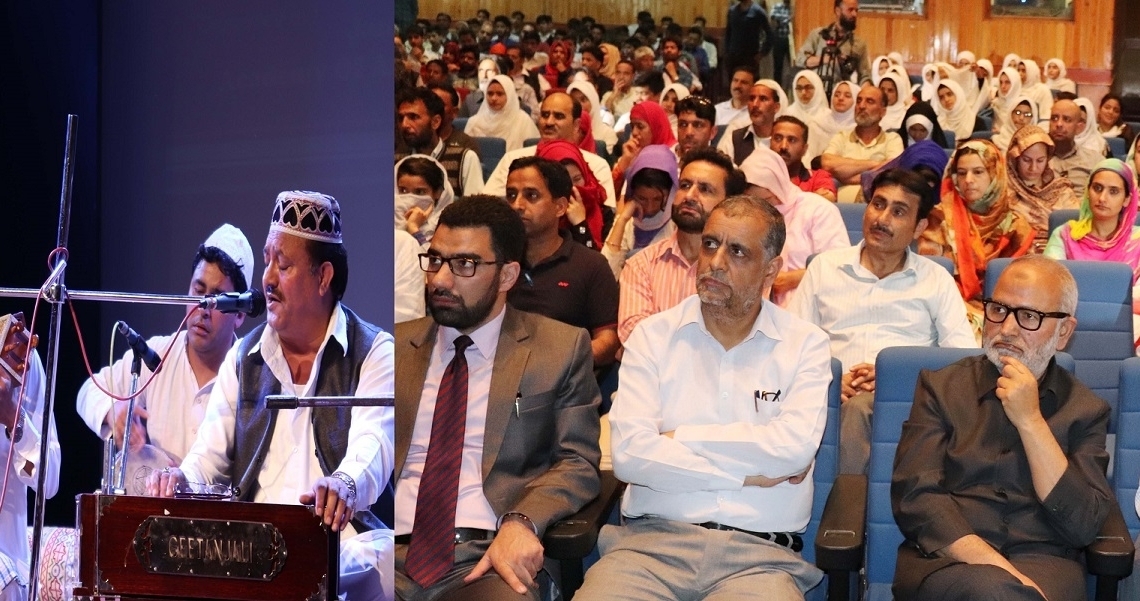 SRINAGAR, MAY 31: To celebrate the rich cultural diversity of Jammu and Kashmir, a unique musical event was organized at the Tagore Hall in Srinagar where Kashmiri artists lent voice to the poetry written by Kashmiri Pandit scholars in honour of Prophet Mohammad (PBUH).
The event titled ‘Naatiya Poetry of Kashmiri Pandits’ is the brainchild of Minister for Public Works and Culture, Naeem Akhtar and it was organized by the J&K Academy of Art, Culture and Languages in collaboration with Directorates of Tourism and School Education Kashmir.
“Celebrating Ramazan through musical tributes to our beloved Prophet Mohammad (PBUH) is ingrained in Kashmiri culture. This program is an attempt of cultural renaissance by the state government to educate new generation about our rich and glorious past,” Akhtar said.
The Culture Minister said Jammu and Kashmir has undergone tough times during the past three decades but new initiatives are being taken under the leadership of chief minister Mehbooba Mufti to revive the philosophy of unity in diversity that has been the hallmark of Kashmiri society.
“In this holy month of Ramazan, these unique initiatives open a new window of opportunity to revive and preserve the rich heritage and cultural traditions of our state. They also foster mutual respect and admiration between different communities that have been torn apart by the events of past three decades,” he said.
Akhtar said the Kashmiri Pandit community has made immense contribution towards the social, political and cultural capital of the state of Jammu and Kashmir, “It is to honor and celebrate their contributions that we have gathered here today and we hope our younger generation will carry forward their rich legacy and message of pluralism,” he said.
The program at Tagore Hall was part of various events being organized by the Culture Academy in Srinagar during the holy month of Ramazan which will be held from 30 May to 11 June at Tagore Hall, Tourist Reception Centre, Srinagar and Sher-e-Kashmir International Convention Centre among other venues.
Today’s event was also attended by Director Information, Muneer-ul-Islam, MD JKSPDC, Shah Faesal, Deputy Commissioner Srinagar, Abid Rasheed, Secretary of JK Academy of Art, Culture and Languages, Aziz Hajni, INTACH member, Saleem Beg, officers of the state government and hundreds of students and artists from different parts of Kashmir Valley.
The works of famed Kashmiri Pandit poets like Dina Nath Nadeem, PyareHatash, Prem Nath Shad, Pitambar Nath Fani and Prakash Ram besides others were recited by prominent singers from Kashmir Valley in nostalgic musical performances which evoked rapturous cheering from the audience in the jam-packed Tagore Hall.