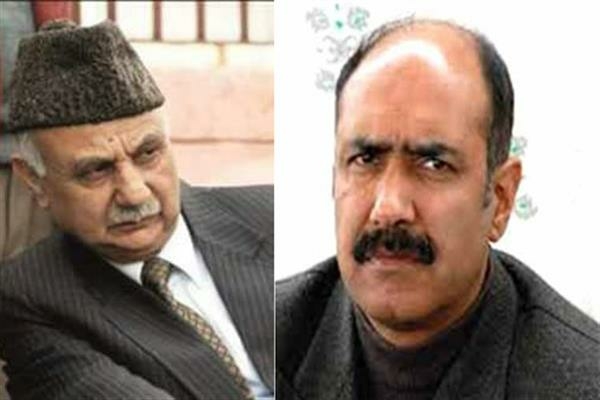 Reports quoting top sources revealed that Peer Muhammad Hussain and Syed Basharat Bukhari will join NC at 10:00 am and 11:30 am respectively at Farooq Abdullah’s residence.

Sources said that both Bukhari, a former minister in PDP government and Peer Muhammad Hussain would be welcomed by Farooq and Omar and other top senior NC leaders at the residence where the two will also address a press conference after joining the party.

PDP expelled both the leaders from the party’s basic membership on charges of “anti-party activities”.

PDP vice president, Abdul Rehman Veeri, as per Kashmir News Service, said: “The party has expelled Peer Muhammad Hussain and Syed Basharat Bukhari from the basic membership of the party on charges of anti-party activities. The party has also removed Mehboob Iqbal, the party General Secretary from the position he was holding.”

Confirming his joining NC, Hussain said, “I have resigned from PDP long back when it was in power. I had also resigned as Vice chairman Wakf Board. I took the decision to quit the party as I saw political sycophants taking over the charge and seniors not heard by the top brass. The party workers were alienated with people at grass roots. When workers are disconnected with the people, what is the fun of remaining in the party?”

“Though party president Mehbooba Mufti had tried to contact me in the past but I was not ready to remain in the party keeping in view its alienation with the people at grass roots,” he added.

Another top PDP leader Syed Basharat Bukhari could not be contacted despite repeated attempts to reach him over the phone but sources confirmed that Bukhari was set to join NC.

It may be recalled here that Bukhari started his political career as a PDP spokesman in 2003 and was, in short time, elected to the legislative council during the reign of the then Mufti Muhammad Sayeed led PDP-Congress coalition government.

He won 2008 and 2014 assembly elections from Sangrama assembly constituency with comfortable majority and was inducted into the then Mufti Muhammad Sayeed led PDP-BJP coalition government as minister for law, justice parliamentary affairs, relief and rehabilitation, which lasted for ten months only.

He was again inducted into the Mehbooba led PDP-BJP coalition government after the demise of Mufti Muhammad Sayeed and given the key portfolios of Revenue, relief and rehabilitation.

However, Mehbooba as Chief Minister divested him of the portfolios of revenue, relief and rehabilitation and offered him the portfolio of horticulture department. Though Bukhari had tendered his resignation over the change in his portfolio but he choose to remain in the cabinet till the fall of PDP-BJP coalition government. Now, after the fall of PDP-BJP coalition government, he has chosen to join NC.

The party has also removed Mehboob Iqbal from the key position of General Secretary.

The decision to expel the two leaders was taken soon after the reports suggested that they were mulling to join NC on Wednesday.