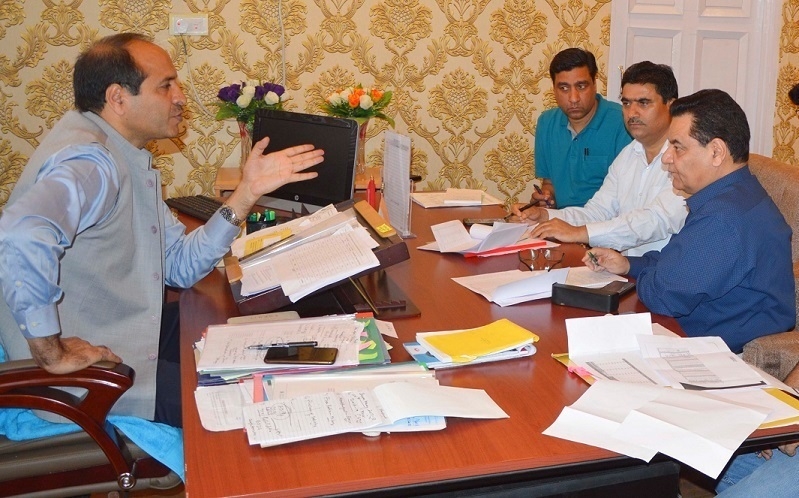 SRINAGAR, MAY 29: In order to regulate the supply of LPG, Minister for Food Civil Supplies & Consumer Affairs (FCS&CA), Mohammad Ashraf Mir, today convened a meeting with representatives of oil companies and concerned officers to review the status and supply of LPG stock in the state.
The meeting was attended by Secretary FCS&CA, Dr Abdul Rashid; Director, FCS&CA (Kashmir), Nisar Ahmad Wani; Controller LMD R K Katoch; Director LMD Jammu and representatives of oil marketing companies including Bharat Petroleum, Hindustan Petroleum, Indian Oil Corporation and other concerned representatives.
The Minister was informed that around 4,80,000 LPG connections have been issued in the state under Pradhan Mantri Ujjwala Yojana (PMUY) up to March 31 this year and around 1 lakh connections have been issued from April 1.
The Minister directed that PMUY should be implemented in letter and spirit and it should be ensured that all the beneficiaries are covered under this scheme. He directed the concerned to cover 100% households with LPG connections.
Mir while taking stock of existing supply of essential commodities in the state directed for ensuring adequate availability of essentials to snow-bound areas in the state. He directed the companies to maintain a contingency stock of LPG so that the local populace does not suffer, mainly in far-flung areas.
Stressing upon strengthening the door-to-door delivery of LPG within shortest possible time, he directed the representatives of oil companies to ensure 100% home delivery in every nook and corner of the state, particularly in far-off areas and snow-bound areas.
While discussing the allotment of LPG gas agencies, the Minister directed that the process should be made transparent and quick so that the delivery of LPG is ensured to all.
On the occasion, the concern regarding the lack of petrol pumps at various stretches of roads especially on newly constructed highways was also discussed. The Minister directed the officials to conduct an extensive survey of various areas that lack petrol pumps so that the same can be set up for better services to the motorists.
The Minister also asked the representatives of the oil companies to utilize their CSR for public good especially for consumer welfare in consultation with the government.

Altaf Bukhari directs release of 50% budget for procurement of ration