Mahrez Finally Gets His Dream Move To Manchester City 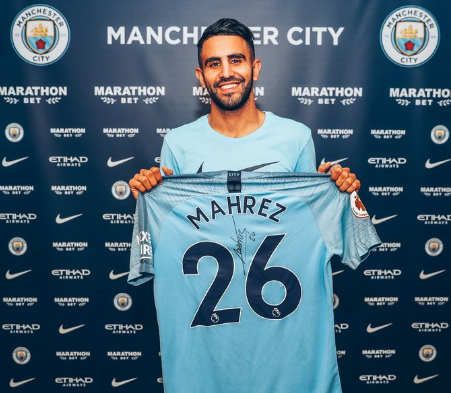 London :Algerian international Riyad Mahrez secured his move to Manchester City , with the Premier League champions paying a reported club-record 163;60 million Euros ($79.6 million) for the winger. It comes seven months after City refused to pay Leicester’s asking price of 163;80 million Euros, having offered 163;50 Euros million plus young winger Patrick Roberts, who was valued at 163;15 million Euros. This time though Leicester said they had sold him in a club-record deal. The 27-year-old, a pivotal figure when Leicester stormed to a shock Premier League title in 2016, signed a five-year contract.
“I am so pleased to have joined City, a side playing great football under Pep Guardiola,” Mahrez told the Manchester City website.
“Watching them from afar has been a pleasure.
“Pep is committed to playing attacking football, which is a perfect for me, and City’s performances last season were outstanding.”
Mahrez, who was so upset at not gaining his move to City at the beginning of the year he sat out two matches, said his new club were revolutionising the game in England.
“They’re redefining the English game and I wanted to be a part of it,” said Mahrez.
“I think we can be successful over the coming years and I believe my own game can develop under Pep’s management.”
City’s director of football Txiki Begiristain said Mahrez’s attacking qualities would add even more of a cutting edge to a side which already has an abundance of talent such as Kevin De Bruyne, Leroy Sane and Sergio Aguero.
“Riyad is a hugely talented player. He beats defenders and creates space,” said Begiristain.
“Over the past few years, he has established himself as one of the Premier League’s most exciting players.
“We’re sure he will bring additional attacking quality to our squad.”